‘How many more bodies need to be found?’: Motion to remove Hamilton’s Macdonald statue defeated at committee

As the 2019 federal election campaign kicks off across Canada, local candidates from all parties canvass the doors of their respective ridings asking for your vote to elect Canada’s next government.

During the last election four years ago, the Trudeau Liberal wave crested over Hamilton, resulting in the party picking up two seats, the first they won in over a decade. While the Liberals won Hamilton West-Ancaster-Dundas and Hamilton East Stoney Creek, the NDP held onto Hamilton Centre and Mountain and the Conservatives won Flamborough-Glanbrook. 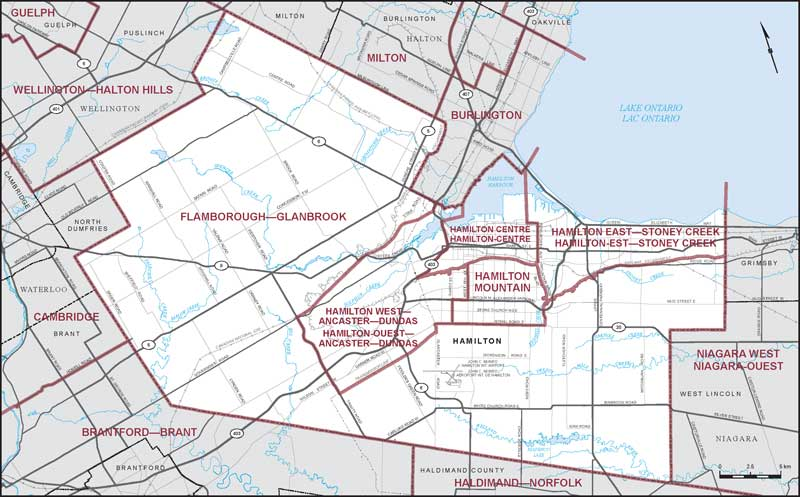 With polls currently neck and neck between the Liberals and the opposition Conservatives, and the Green Party picking up momentum, suffice it to say Hamilton may see another three-way split between the city’s five ridings again…or some surprises could be in store.

Here’s who is running to become MPs for Hamilton in Canada’s next parliament.

This riding stretches from Waterdown all the way to Glanbrook and includes communities such as Flamborough, Binbrook and some of Hamilton’s newer subdivisions. David Sweet, who was first elected MP in the old Ancaster-Dundas-Flamborough-Westdale riding in 2006, was re-elected in the new riding in 2015 and is running for re-election this year.

Liberal Jennifer Stebbing, an estates lawyer with a prominent Hamilton law firm who previously ran here in 2015, is the standard-bearer for the Grits again. Other candidates include high school teacher Allison Cillis for the NDP, environmentalist Janet Errygers for the Greens and David Tilden for the People’s Party of Canada.

Veteran NDP politician David Christopherson, a former provincial cabinet minister in the Bob Rae government and MP for the last 15 years, is retiring. The New Democrats nominated Matthew Green, a vocal former city councillor from 2014-2018, as their new candidate. Green was an early backer of Jagmeet Singh’s leadership bid.

For the other parties, lawyer Jasper Kujavsky is representing the Liberals, Monica Ciriello is the Conservative candidate, Jason Lopez is running for the Greens, Melina Mamone is the PPC candidate and Gary Duyzer is the Christian Heritage Party’s candidate.

This riding will also see three former municipal candidates running as Independents: Tony Lemma, who attempted to win Ward 3 when Green stepped down from council, former mayoral candidates Edward Graydon and Nathalie Xian Yi Yan. Yan actually defaulted on filing her financials for her municipal run, but is still allowed to run in the federal election.

This riding is one the Liberals took back from the NDP when former Hamilton mayor Bob Bratina wrestled it from the NDP, who held onto the seat since 2006. Bratina is running again but caused some controversy earlier this year when he allegedly used derogatory language towards retired steelworkers and pensioners during a meeting with union representatives.

Nick Milanovic, an arbitrator, mediator and workplace investigator, is the NDP candidate this time around. Other candidates include real estate lawyer Nikki Kaur for the Conservatives, energy conservation specialist Peter Ormond for the Greens and Charles Crocker for the PPC.

Former city councillor Scott Duvall kept this riding in the NDP fold in 2015 in a tight race after then MP Chris Charlton decided not to run again. Duvall is running for re-election in this traditionally orange riding that has switched between the NDP and Liberals since the 1980s.

The other candidates are lawyer Bruno Uggenti for the Liberals, former Hamilton Tiger-Cats offensive lineman Peter Dyakowski for the Conservatives, Dave Urquhart for the Greens, Trevor Lee for the PPC, Jim Enos for the Christian Heritage Party and Richard Plett will be running for the Rhinoceros Party.

The Liberals will be looking to hang onto the second riding they won in the city with Filomena Tassi, the current Seniors Minister, running for re-election. Before her election to the House of Commons, Tassi worked as a chaplain at Bishop Tonnos Catholic Secondary School in Ancaster.

But the NDP candidate, community organizer Yousaf Malik, will be looking to steal this seat from the Liberals. Bert Laranjo, a medical consultant, is running for the Conservatives, while the Greens are running McMaster teaching assistant Victoria Galea.

Rounding out the field in the HWAD riding is PPC candidate Daniel Ricottone and Spencer Rocchi for the Rhinoceros Party.

Next door in wine country there are four federal ridings with some interesting races as well. Here are some brief notes on who is seeking office in Niagara Region.

Former Port Colborne mayor Vance Badaway was under the Liberal banner in a tight three-way race in 2015, besting then NDP MP Malcolm Allen. Allen is back again as the NDP candidate, while the Tories are running April Jeffs, a former Wainfleet mayor and a small business owner.

Other candidates include Michael Tomaino for the Green Party, Andrew Sainz-Nieto for the PPC, Robert Walker of the Marxist-Leninist Party and Nic Bylsma for the Christian Heritage Party.

Rob Nicholson, whose political career spanned back to the 1984 election when he was elected as a Progressive Conservative, is retiring after being re-elected to Parliament in 2004 and serving as a Cabinet minister in Stephen Harper’s government. The riding includes three municipalities: Niagara Falls, Niagara-on-the-Lake and Fort Erie.

With Nicholson’s retirement, the Conservatives selected Tony Baldinelli, a communications manager for the Niagara Parks Commission, as their new standard-bearer. On the other hand, the NDP easily held this seat provincially last year and they are looking to replicate that success federally with schoolteacher Brian Barker.

Other candidates include Andrea Kaiser for the Liberals, Sandra O’Connor for the Greens, Alexander Taylor for the PPC and Tricia O’Connor for the Christian Heritage Party. To add to the mix, Niagara Falls city councillor Mike Strange is running as an Independent.

This is the predominantly rural area of Niagara Region consisting of towns such as Lincoln, West Lincoln, Pelham, and Grimsby. Dean Allison has been the Conservative MP for this area since 2004 and is running for another term.

During the 2018 provincial election, the NDP swept four out of five Hamilton ridings while the provincial Tories took the remaining one. With the ongoing trouble Jagmeet Singh is having in gaining traction from public opinion, it’s not a sure bet that same result will be replicated in the federal vote.

Could either the Liberals or the Conservatives take political advantage of the NDP’s dropping support? Only time will tell.