The registration deadline for municipal elections across Ontario have come and gone, and the field is now set for those looking to represent Milton residents at town and regional council.

A noticeable change for this year’s town elections is that a ward boundary review has actually reduced the number of total councillors from eleven to nine. Similar to the Oakville model, each ward will now have one Milton town councillor and another councillor that also sits on Halton Region council, along with the mayor. 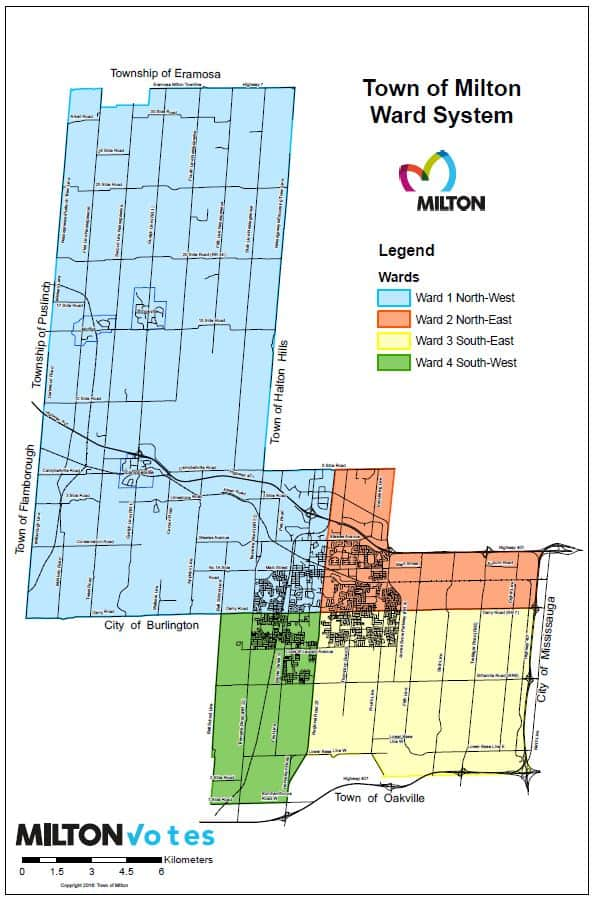 This increases Milton’s representation at the regional level from currently three members to five members, but it also led to a number of interesting matchups as some incumbent councillors have to run directly against each other to keep their jobs.

With that being said, let’s take a look at who the candidates are running in this year’s municipal elections in Milton for mayor, councillor, school trustees and regional chair for Halton.

The re-election of Mayor Gord Krantz every four years is pretty much a given by this point. A former firefighter, he was first elected as town councillor way back in 1965, and then elected mayor in 1980. On December 1, 2016, Krantz surpassed legendary Mississauga mayor Hazel McCallion as the longest serving mayor of a major, large municipality in Canada.

Even at 81, Krantz shows no signs of slowing down, registering on May 11 to run for an unprecedented thirteenth term as mayor. That doesn’t mean Krantz doesn’t draw competitors to his job. Two others have stepped up to run against the beloved Krantz: real estate broker Wasim Ahmed and Mian Amir Naeem, an IT professional with a background in project management who also happens to be president of the Milton federal Liberal riding association.

Unlike neighbouring Peel and in other regions, Halton still has an election for regional chair.

First elected in 2006 after a career as a provincial MPP and federal MP, Gary Carr is running for his fourth term as chair. For some time, it looked as though he would be acclaimed, but Anne Marsden registered to run as the deadline came and went.

Marsden is a former Burlington mayoral candidate who also ran for regional chair back in 2000, but as of this writing she has almost no information on her website. Carr is running the classic frontrunner campaign, touting his holding the line on taxes, investing in infrastructure, and job creation.

This rural ward, comprising of hamlets like Milton Heights and Campbellville, now include portions of downtown Milton and neighbourhoods like Bronte Meadows. Regional Coun. Colin Best, who recently had a minor health scare, is running for re-election in the new ward. Best is the outgoing regional councillor for Wards 2, 3, 4, 5, and he is facing Farooq Azam and Hassu Bihari in his re-election bid.

As for the town council race, it was set to be an incumbent vs. incumbent battle, until Mike Boughton passed away last month. Current town councillor Cindy Lunau is still running but she faces three other candidates: construction project manager Chris Jewell (who ran as a Libertarian Party candidate in the 2015 election in Milton), real estate lawyer Kristina Tesser Derksen and Mahmood Chaudhry.

Comprising of neighbourhoods such as Dorset Park, Dempsey, Clarke and Timberlea, this ward has two incumbent town councillors, Rick Malboeuf and Arnold Huffman, running against each other to get elected to regional council.

The situation between Huffman and Malboeuf is interesting because last year, Huffman’s campaign expenses from 2014 came into question as accusations were laid out that he willingly accepted cash donations beyond the limits allowed under the municipal elections act.

Another councillor said in this blog post Malboeuf spearheaded the investigation into Huffman because he knew they would have to run against each other, so the feeling was Malboeuf used the other councillors to advance his personal political agenda.

Huffman was subsequently not charged by the OPP, and Malboeuf was reprimanded by the Integrity Commissioner for using his office to text and allegedly threaten a potential witness in a court appeal. While both these councillors may have high name recognition as incumbents, there are other choices if you’ve soured on them: Aman Singh Hans and banking professional Falak Shoaib are also running.

In the town councillor race there are six candidates running. The most recognizable name amongst them may be John Challinor, a former councillor for 12 years looking to make a return to municipal politics. Also running are returning candidate Giles VanderHolt, Michael Vertolli, Roy Zwolman, Sarah Jensen and Galen Naidoo-Harris, the son of former MPP Indira Naidoo-Harris.

In the town councillor race, it looks like it’s going to be a bit of a grudge match as Coun. Robert Duvall and Coun. Rick Di Lorenzo square off to earn another four years at town hall. Joining them is a a third candidate, Usman Kayani.

Both councillors have jobs outside town hall; Duvall runs his own consulting firm and Di Lorenzo is a senior development manager with Sun Life Financial who also happens to publish his own magazine, the Milton Villager. Could that pose an unfair advantage for Di Lorenzo who can potentially use his magazine to promote his re-election campaign?

The regional council race in this ward has somewhat turned into an interesting five person race as town councillors Zeeshan Hamid and John Pollard are vying to become the new regional councillor, with real estate professional Sammy Ijaz and David Hertzman also running.

But it’s the fifth candidate’s name that may ring some bells: Tony Lambert, the former regional councillor who was convicted of impaired driving in 2011, then subsequently arrested at Milton town hall for a bail violation two years later. Lambert lost a previous bid to return to Milton council in the 2014 elections.

Milton will also send two public school trustees to sit at the Halton District School Board.

Trustee Donna Danielli has been acclaimed to another four year term as no other candidates registered to run here by the deadline.

Milton sends two Catholic trustees to represent the entire town and this year six candidates are running for those positions.