This week, the Ontario government delivered their fall economic statement, otherwise known as a ‘mini-budget’, which is usually a preview to the actual budget they will deliver in the spring of 2019.

Amongst the news announced is a lower deficit by $500 million, cancellation of certain provincial watchdog agencies and extending LCBO hours.

But there is one bit of news that are relevant for those of you who rent: the province is announcing plans to roll back rent control for some tenants.

Rent controls were brought in by the previous Liberal government on all residential units in order to address the issue of affordable housing availability.

With the PC government’s proposal, new rental units will not be subject to rent control, but tenants who live in older units that currently abide by rent control legislation will still be protected from higher-than-expected increases.

Tenants in newer units, on the other hand, could face steeper rent increases going forward.

Fedeli also announced plans to cancel the “expensive and ineffective” Development Charges Rebate Program, something it says will create savings of approximately $100 million over four years.

Naturally, there were reactions from various parties and individuals over the rent control changes.

The Ontario NDP released this statement, pointing out that scrapping rent controls will only result in housing prices being driven up higher.

“Things were already getting tougher and tougher for so many people just trying to make ends meet and get ahead of the bills,” said NDP Leader Andrea Horwath. “Instead of fixing that, it looks like Doug Ford is hell-bent on making people pay more for the things they need in life.”

Liberal MPP Michael Coteau echoed the concerns over impacting living costs, although one person responded to his tweet said rent control was just reallocating wealth (aka ‘government sanctioned theft’) from those who made the risk of purchasing and are trying to pay off the mortgages.

Doug Ford is cancelling #rentcontrol on all new buildings. This will make living costs across Ontario and especially Toronto even more expensive! This is not a government for the People. #onpoli #FES #TOPoli 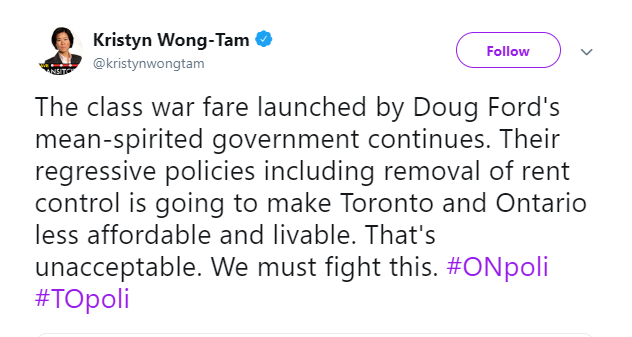 Toronto has an affordable housing crisis. Today, following Provincial announcements which included rolling back rent controls, a small group of developers joyous laughter could be heard echoing throughout the halls of Queen's Park. (This isn't a metaphor. This actually happened.)

But one man in response to Keesmaat said it was just a matter of economics:

The issue of rent controls in Ontario and in other jurisdictions is certainly going to be a hot topic in the years ahead as housing is always an important topic on people’s minds.

BONUS: if you want to read a rather insightful article on rent controls, click here.

What do you think of the province’s announced elimination of rent controls on new units?