A Progressive Conservative MPP has introduced a private member’s bill that seeks to address a rather contentious issue: denying returning ISIS fighters government services once they return to Ontar

A Progressive Conservative MPP has introduced a private member’s bill that seeks to address a rather contentious issue: denying returning ISIS fighters government services once they return to Ontario…and he has Premier Doug Ford’s blessing to do so.

Dave Smith, the MPP for Peterborough-Kawartha, introduced Bill 46 (the Terrorist Activities Sanctions Act) on Monday, October 22 that will amend several acts to provide repercussions for individuals convicted under anywhere in Section 83.18 to Section 83.221 of the Criminal Code, which address participation in terrorist activity.

Below is Smith in the Legislature reading his bill.

“The child of a parent who is convicted of a terrorist offence is considered in need of protection under Part V of the Child, Youth and Family Services Act of 2017,” the bill states.

With regards to provincial government services, the bill proposes to make those convicted for terrorism ineligible for the following:

Bill 46 is scheduled to be debated in the Legislature on November 15.

Premier Ford was also adamant on his stance towards returning ISIS fighters, a sharp contrast to what Ford views as a more lenient approach from Prime Minister Justin Trudeau. 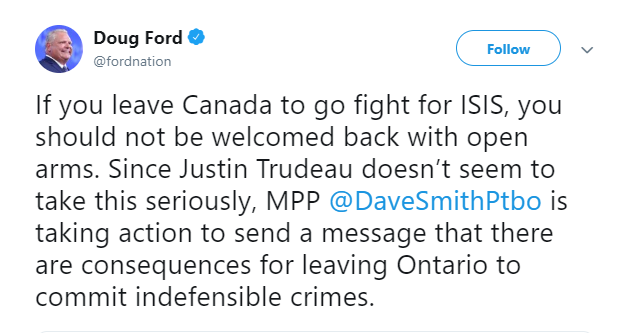 The issue of what to do with Canadians who went over to the Middle East to fight for ISIS has been problematic for the federal Liberal government, which feeds into the perception that they are ‘soft on terror.’

Trudeau took some political heat for justifying a $10 million compensation package, as well as an apology, to Omar Khadr, a Canadian who was a child soldier for the Taliban who was detained at Guantanamo Bay for killing a U.S soldier during the Afghan conflict.

Currently, the federal government has been vague on their position of returning ISIS fighters. Public Safety minister Ralph Goodale, in a recent interview on CTV, stated that there is no offer or legal obligation on Ottawa’s part to repatriate these people.

“We have no obligation for repatriation. It is difficult to provide consular services as Kurdistan is not a state,” Goodale said, referring to the region where these ISIS fighters were operating from, adding that the government will follow the standard procedure of Canadian law.

“Whether they are terrorists or families of terrorists, cases will be investigated, with the sole mission of finding out the truth and charges will be filed when appropriate,” the minister concluded.

People have asked why can’t these people just be thrown in jail if they manage to get back into Canada; the argument is that you can’t prosecute someone you cannot repatriate back  into this country.

With the premier’s blessing, this is one private members bill that may become a reality. The government themselves might just table their own bill on the matter.

Do you believe in denying government services to people returning to Ontario who fought for ISIS?