All COVID-19 cases reported at Halton grocery stores: April 11 to 17

One of the challenges of a community that is experiencing rapid growth in population like Oakville is how to manage that growth. The town’s population increased by six per cent as of the 2016 Census and is on track to surpass 200,000 residents. In response, the Town of Oakville recently released a plan called Livable Oakville to deal with that growth and to conform with the guidelines of the provincial smart growth strategy.

A public meeting was held on Sept. 11 to discuss the Livable Oakville plan, which consisted of reviewing requests to do road re-alignments and updating the parking/urban design related policies and redrawing district boundaries specifically in the district known more commonly as Midtown Oakville.

You can watch the portion of the planning meeting in council when they start discussing this topic here, although if you want to get a general sense of public mood when it comes to planning and development in Oakville, I would encourage you to watch the entire meeting.

As Leslie Graham Woods from the town’s planning services department outlined, Midtown Oakville was originally designed to accommodate 12,000 residents, with 200 people per jobs per hectare. As a result, Woods says that substantial changes would be required to adapt the area to this change as per provincial growth guidelines, which will require removal of existing properties over the long term.

This is a map of Oakville showing where “Midtown Oakville” is located in the town. 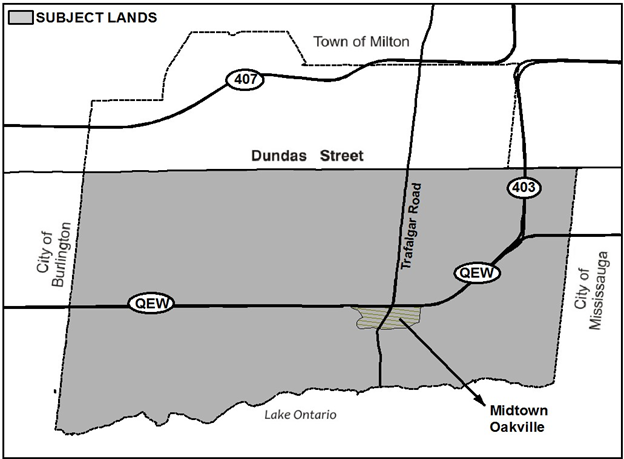 Below is a closer view of the section of Midtown Oakville slated for road re-alignments and other changes. It is serviced by the Oakville GO train station.

Council approved the Midtown Oakville Class Environmental Assessment (EA) at the conclusion of a comprehensive, two-year EA study process in 2014. The Midtown EA identified key changes to the existing and planned road network that would be required to support planned growth. The Midtown EA study process, to define the preferred future transportation and stormwater network, is discussed in a previous report which was presented to Oakville’s planning/development council and approved on May 27, 2014. 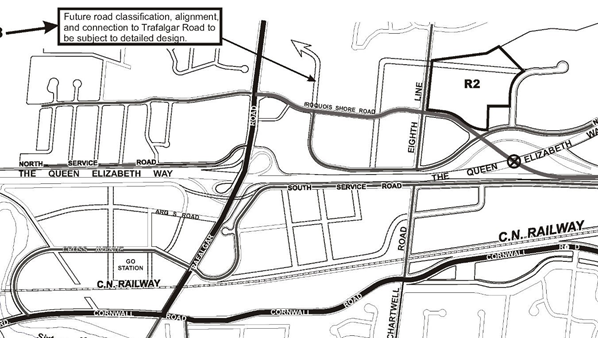 The proposed changes to Midtown EA roads are as follows:

There are no immediate plans to construct new roads.

As part of the town’s ongoing Official Plan Review program, there will be a new Midtown Oakville Growth Area Review project undertaken throughout 2018. It will review the existing mix and distribution of land uses, building heights, and associated policies, including implementation policies and initiatives. It will also make recommendations that:

It is anticipated that an initial report about the 2017-2018 Midtown Oakville Review will be presented to the Livable Oakville (Official Plan Review) Council Subcommittee by December.

Oakville town councillors had some questions to staff pertaining to whether Metrolinx was funding any of these projects, how much public input was put into the Active Transportation Master Plan, the north-south crossing at Royal Windsor in regards to multi use, and how much consultation was done with the business community with regards to their property rights.

Staff answered that the Kerr Street project, because of its proximity to a GO station, would be a partnership between Oakville and Metrolinx, the provincial transit agency. Staff also explained that they had three public information centres, stakeholder meetings, meetings with individual landowners, and all businesses impacted by the plan received notices including those notifying of completion.

The last question about impacts on the business community had some responses from representatives of those businesses concerned about the impact of the amendment to the official plan, such as Algonquin Power’s Oakville facility.

Karen Bennett, Algonquin’s representative, explained how these road projects would cut off access for their location. The loss of parking space and shortages to their tenants was another of Algonquin’s concerns. Bennett requested a meeting to discuss the road alignments with the Ministry of Transportation and be sure they are aware of their issues and to provide relief before anything gets approved. Other businesses termed it as “expropriation without compensation”, to which there was little reply, as litigation of legal matters is not within the mandate of a local municipal council.

Undoubtedly there will be more meetings and consultations with interested parties within Midtown Oakville and the surrounding area before these road re-alignments are to take place. They are all part of attempts to make Oakville into a more “livable community.”