Canadians come from all walks of life, and nobody is expecting all people in this huge country to think in lockstep at all times.

With that being said, a new poll conducted by Abacus Data shows that voters definitely have a unique worldview when it comes to various beliefs and issues, such as Homosexuality. On ‘Diversity and Racism’: 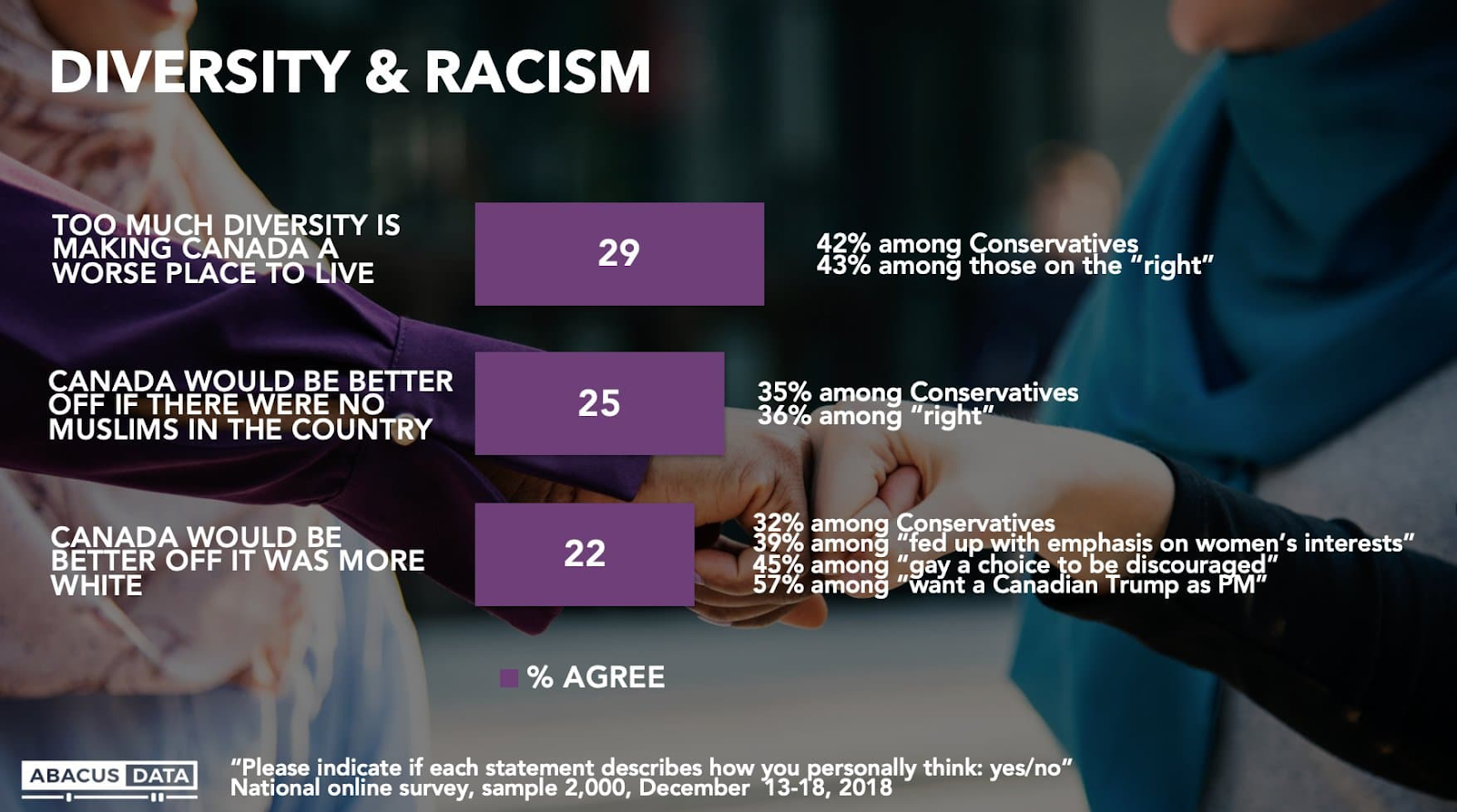 Even though Canada has this reputation as an open and accepting country for people from all over the world, there is a significant segment of the population that sees the downsides of diversity and towards one particular group of people. 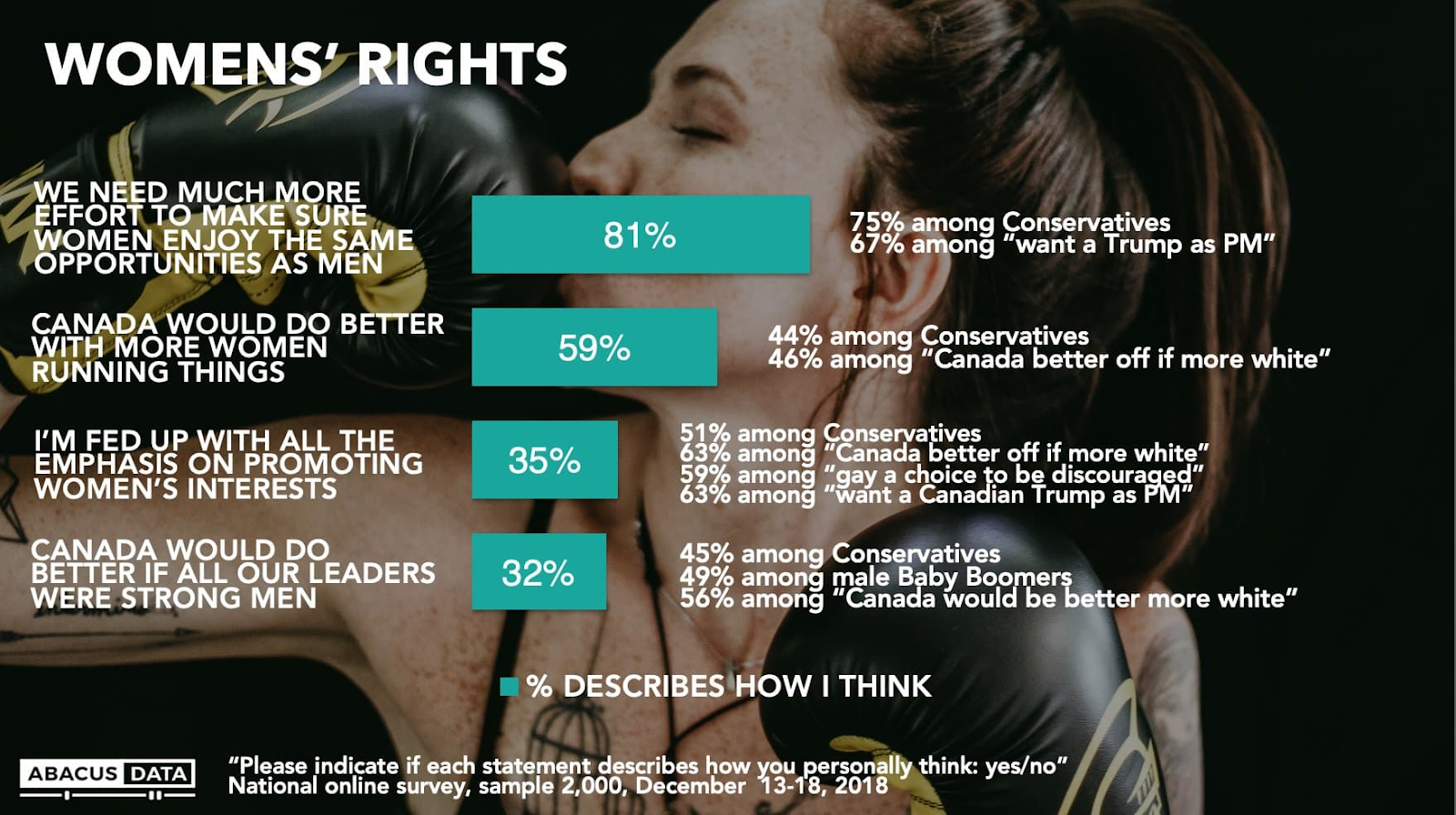 While the results on those who believe in more of the same opportunities for women that men have and if women were running things would be better were not surprising, there is a segment that believes that more ‘strong men’ as leaders would be better and that there was too much emphasis on ‘women’s interests’.

And Canadians’ views on our neighbours to the south, America: 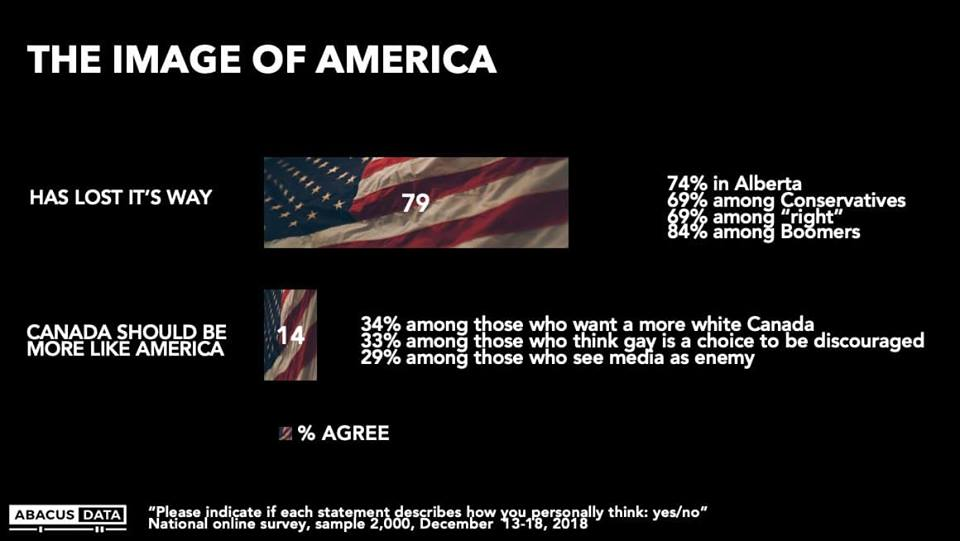 I found this surprising because Alberta tends to have a higher percentage of people who are more ‘American friendly’ yet a vast majority believe that country has ‘lost its way’.

Abacus Data conducted this poll between December 13 to 18 in 2018, in a national online survey of a sample of 2,000 respondents.

It might be surprising to comprehend, but there is a segment of the population who actually like Trump and are big fans of his rather abrasive style and image of “getting things done”…at least on the surface; once you do deeper analysis you’ll understand that Trump’s powers are limited to how persuasive he can be with the Legislative branches of the American system of government.

Another way of looking at things is this notion of populism seeping into political debate, especially for those of you who are big fans of former Toronto mayor Rob Ford and Ontario Premier Doug Ford. Some of you may even say that Trump copied the Rob Ford populist playbook to a grander scale.

Regarding the result on those regarding the emphasis on women, that may be a by-product of Prime Minister Justin Trudeau’s concentration on issues like gender equality, specifically putting that into budget documents and having a cabinet comprised of equal numbers of men and women.

As we approach a federal election later this year, it’s actually a good idea to have debates like this and air out over issues that were previously long accepted as settled. What does a Canadian version of Trump mean in this country?

What do you think of the result of this survey?