Catholic board meeting ends before vote on flying Pride flag in Oakville, Burlington and Milton schools

The Region of Halton and CN Rail are currently in a dispute over a proposal by the rail company to construct an intermodal logistics hub in Milton that could see an increased number of heavy transport trucks driving through residential neighbourhoods.

The project is currently undergoing a federal environmental assessment under a joint review panel process, but Halton Region, its municipalities and Conservation Halton have taken the dramatic step of filing a court challenge against CN Rail in order to get them to negotiate for a better resolution.

But if CN Rail is allowed to go through with this project, the Region asserts that would mean the for-profit rail company would be allowed to self-regulate in areas that should be regulated by the province and municipalities.

The proposed site, which will begin with 400 acres out of the 1,200 acres of land CN Rail currently owns, sits at the southwest portion of urban Milton. It would be bordered by Tremaine Road to the west, Britannia Road to the north, Lower Base Line to the south and Highway 25 to the east. This map shows the approximate location: 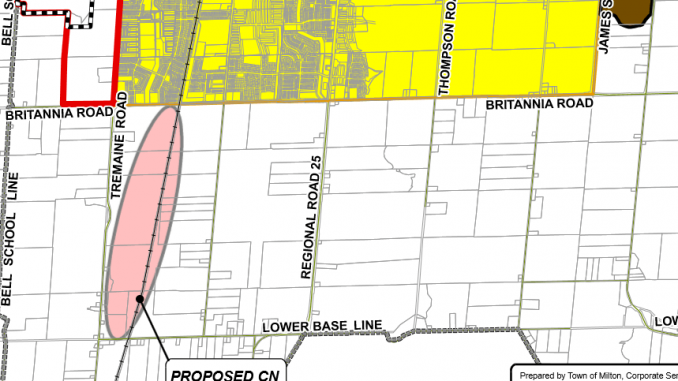 Milton councillors Robert Duvall, Mike Cluett, and Zee Hamid held an information town hall session at the Milton Memorial Arena on April 4 to provide background information, the town’s position, and to suggest what the next course of action should be.

The town hall was attended by a number of residents and various politicians, including almost the entire Milton council, Mayor Gord Krantz and Halton Regional Chair Gary Carr. 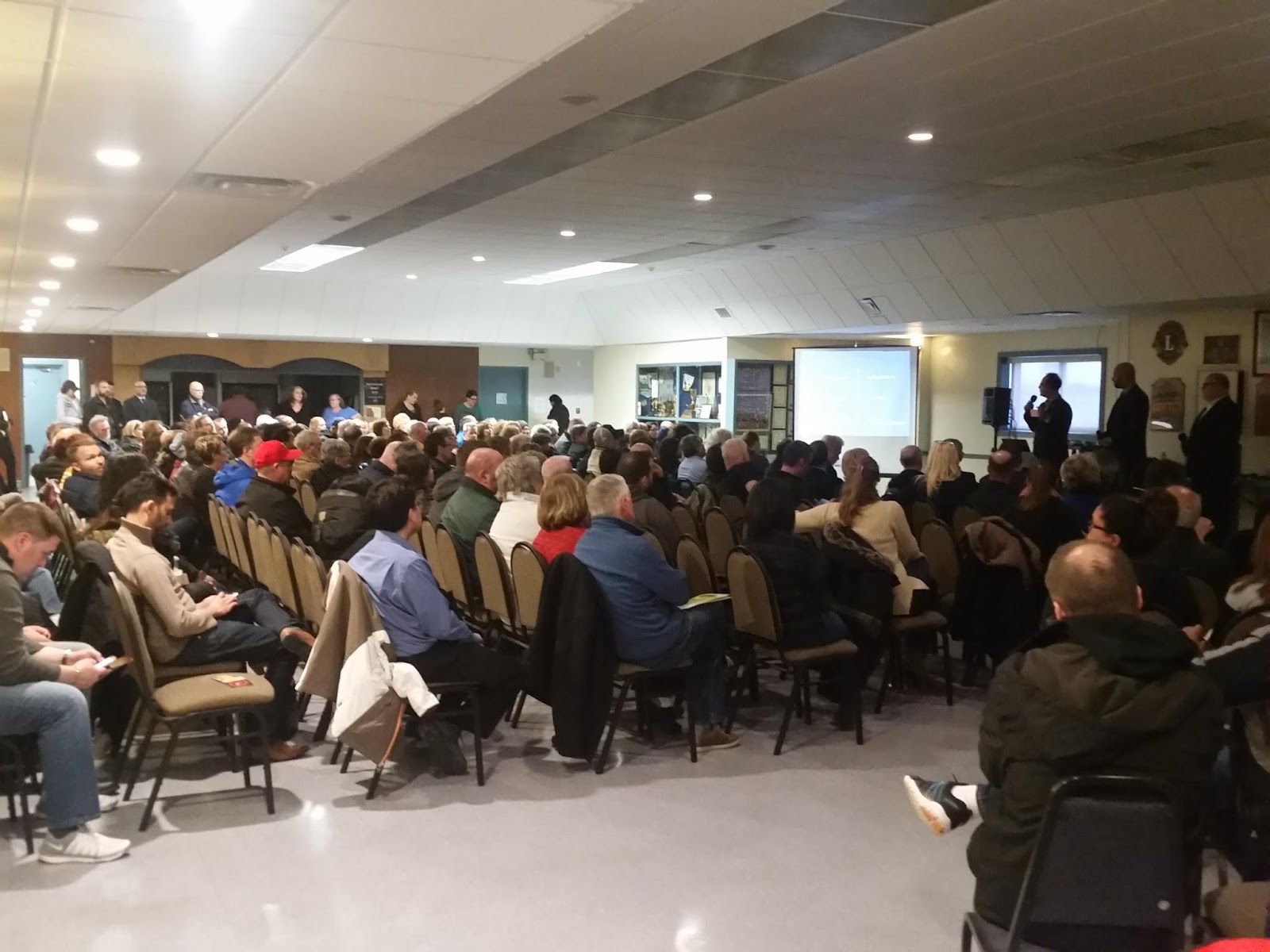 There were also displays set up by local groups Milton Says No and Milton RAIL who are opposing the project and asking people to sign up and take a sign (RAIL stands for Residents Affected by Intermodal Lines). 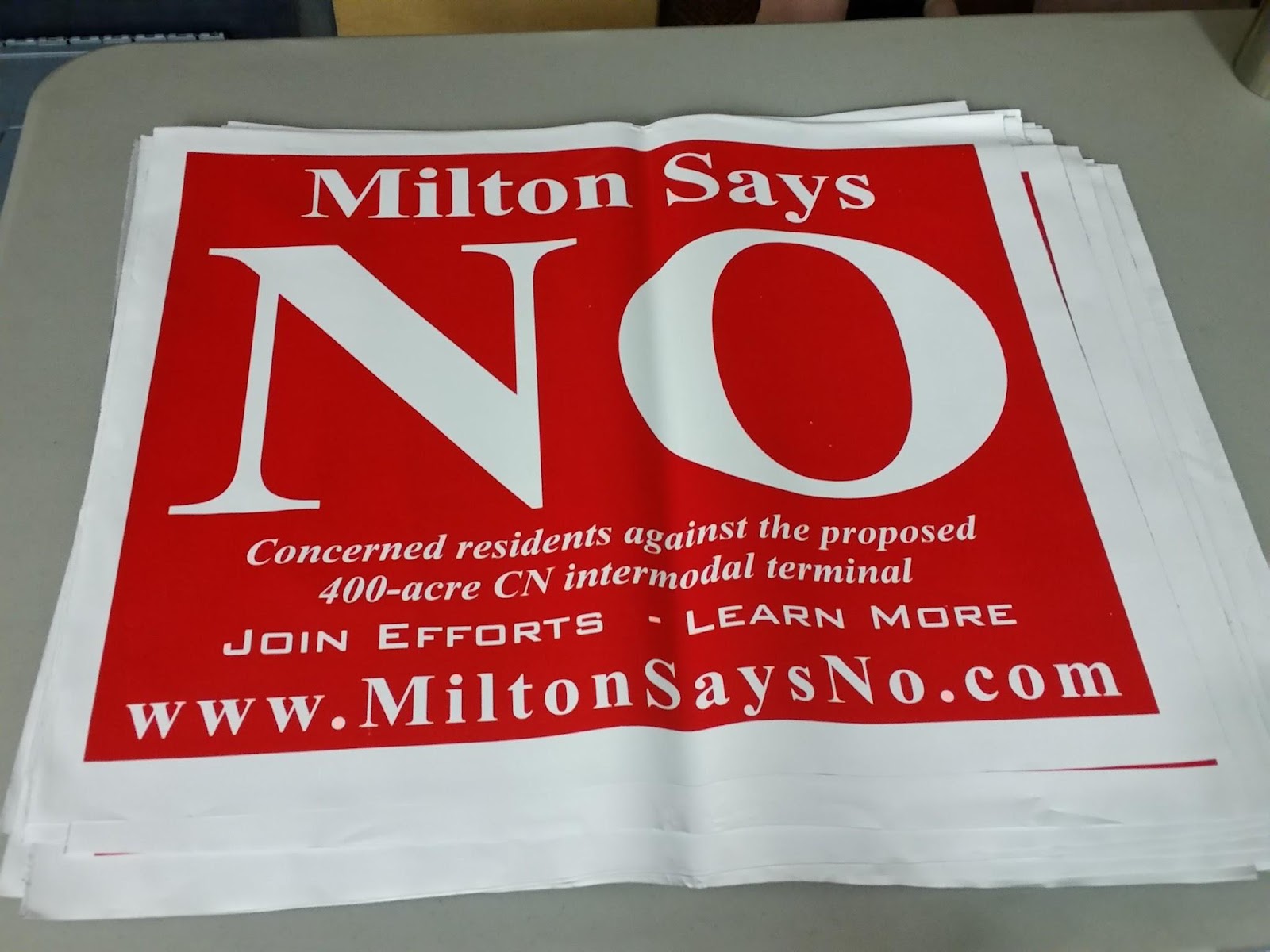 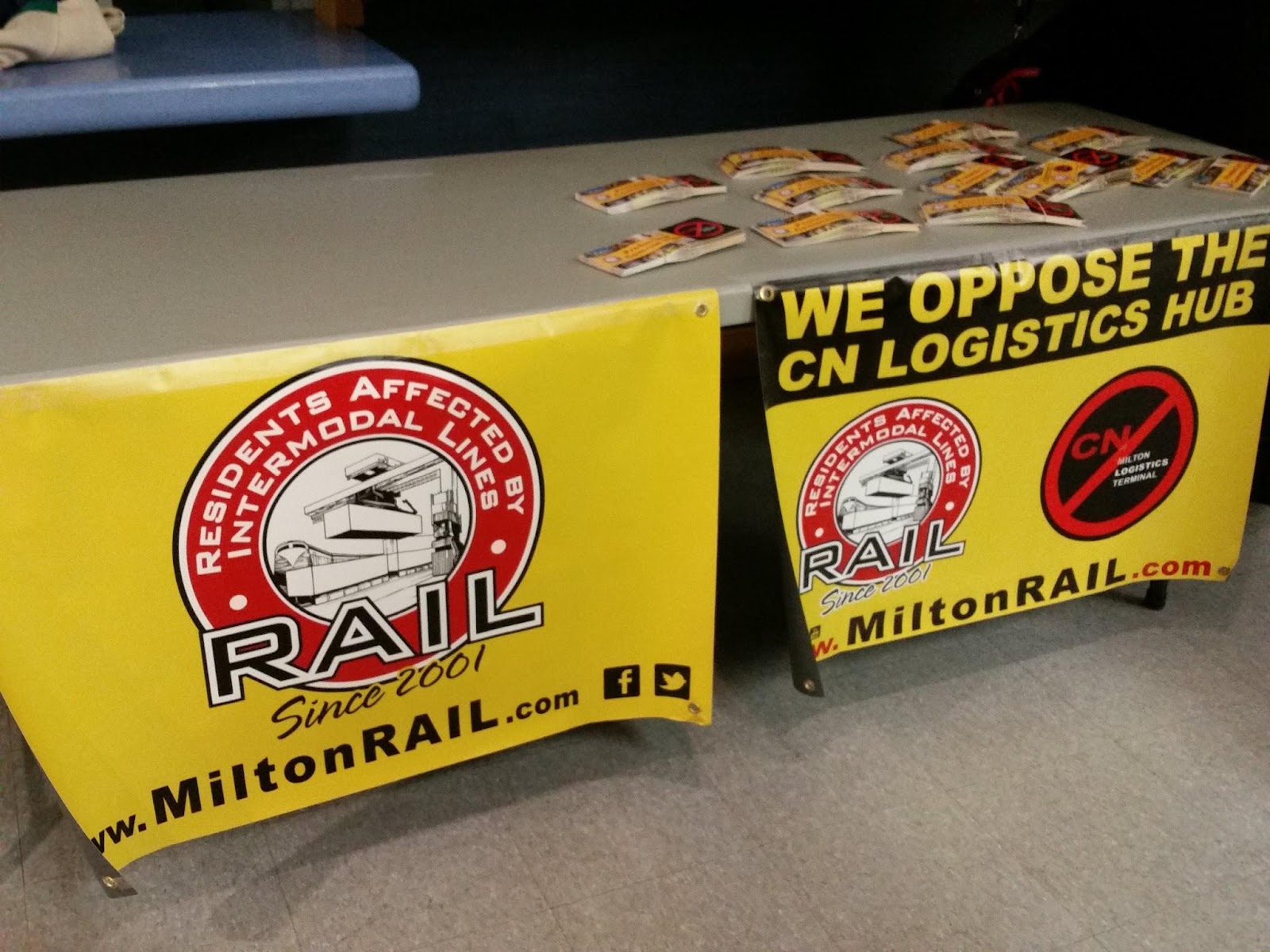 Here are some brochures that were handed out by Milton RAIL: 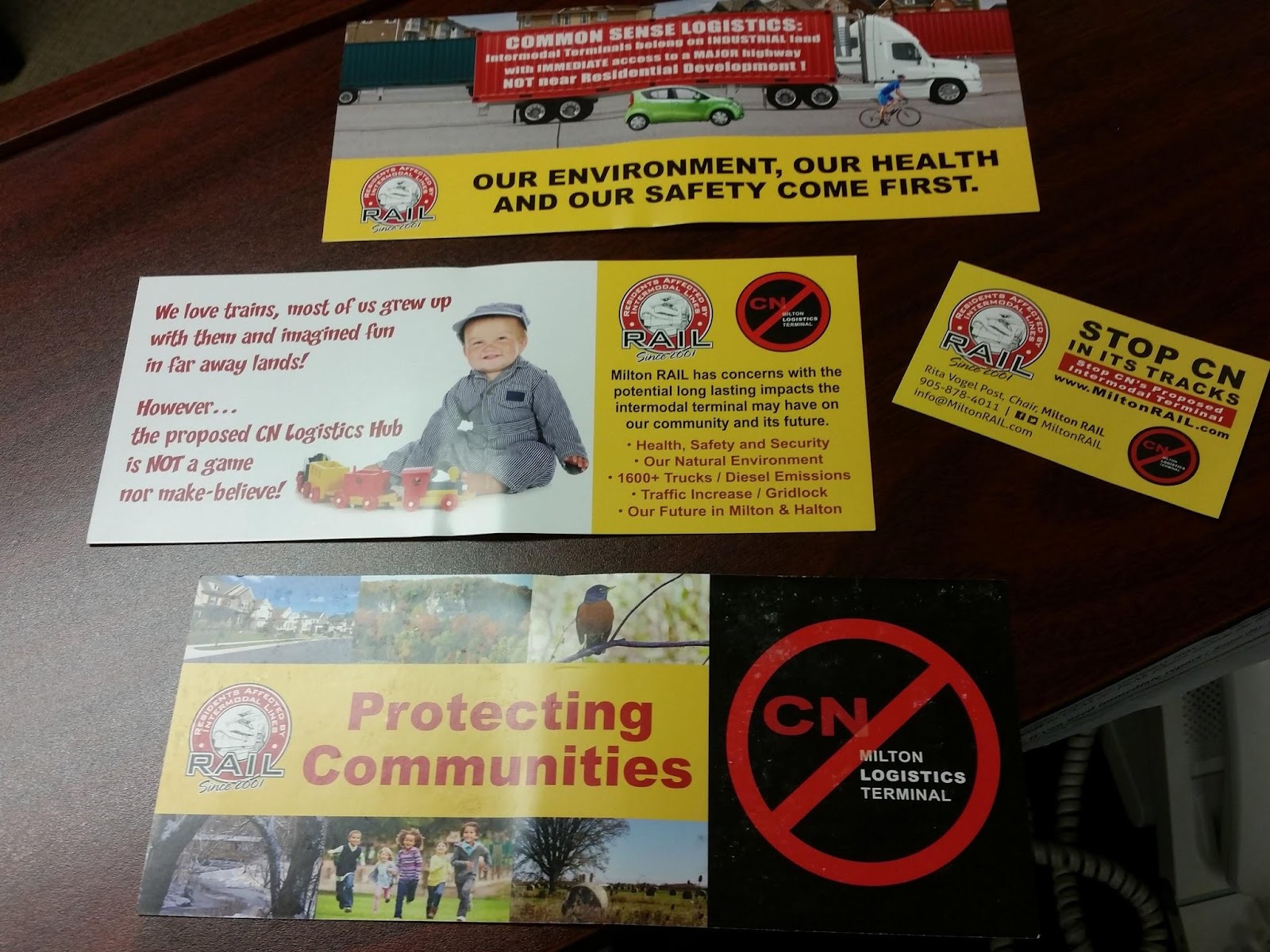 Residents were quite upset that Indira Naidoo-Harris, the Liberal MPP for the area, and federal Conservative MP Lisa Raitt did not attend. Cluett indicated that both were invited, but Raitt was ill and Naidoo-Harris had other commitments, but it sounded like some people thought that Raitt, the former transport minister, was still doing that job.

Mississauga councillor Sue McFadden was present at the town hall.

“I continue to be concerned about the amount of truck traffic entering Mississauga along Britannia Road that will result from the operation of this facility. We’re talking about 1,600 truck trips per day as a start! When the 401 or 407 are congested, drivers will look for the quickest available route for their deliveries…and that’s Britannia Road. I stand with my colleagues and neighbours in Milton and the Region of Halton in opposing CN’s intermodal hub at the proposed location,” McFadden said in a statement to inhalton.com.

The three Milton councillors asserted that they were not outright against the CN Rail Logistics Hub, nor were they intending to intrude in an area of federal jurisdiction (in this case, railways) that could lead to a constitutional challenge. Rather, their issue was over the non-rail aspects of this project that were seemingly circumventing the standard approval process.

“There are a lot of aspects to this project that are not rail based,” said Duvall, explaining that non-rail aspects (such as the trucking) and its potential effects should fall under provincial and municipal regulatory oversight.

However, as recently as 2008, councillors were told by CN Rail that they would not be building such a hub on the land they purchased. Instead, CN was looking at something like an employment or business park that would have been more in sync with the town’s plans for redesigning the urban part of Milton.

The graphics below shows the number of provincial and municipal regulations CN Rail has indicated that they don’t need to comply with, according to the Region: 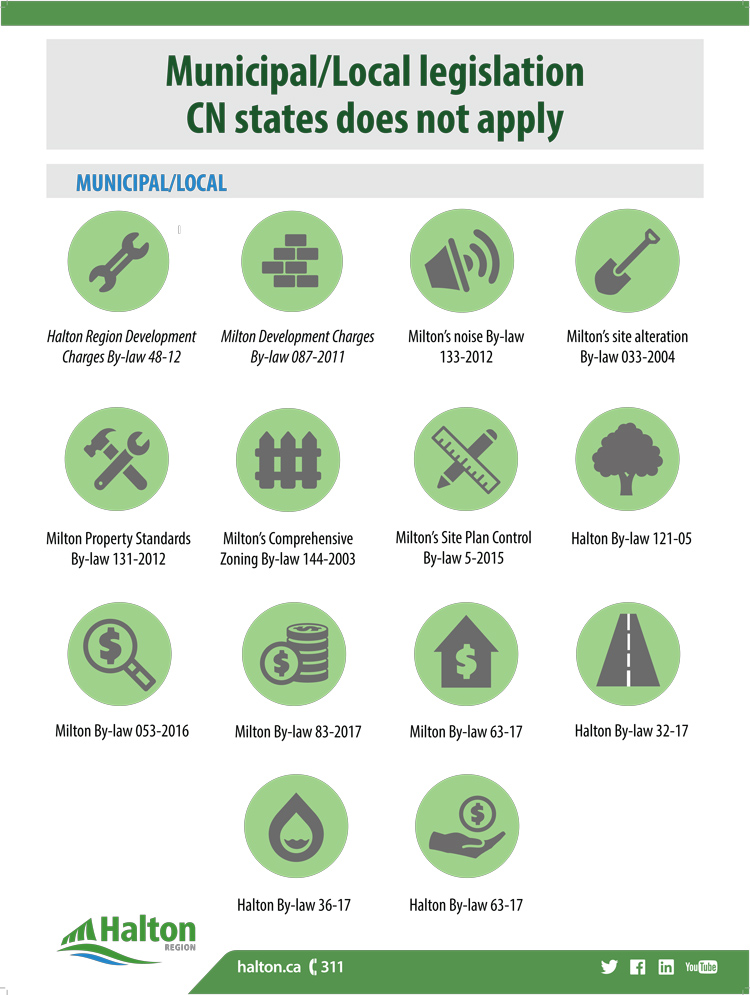 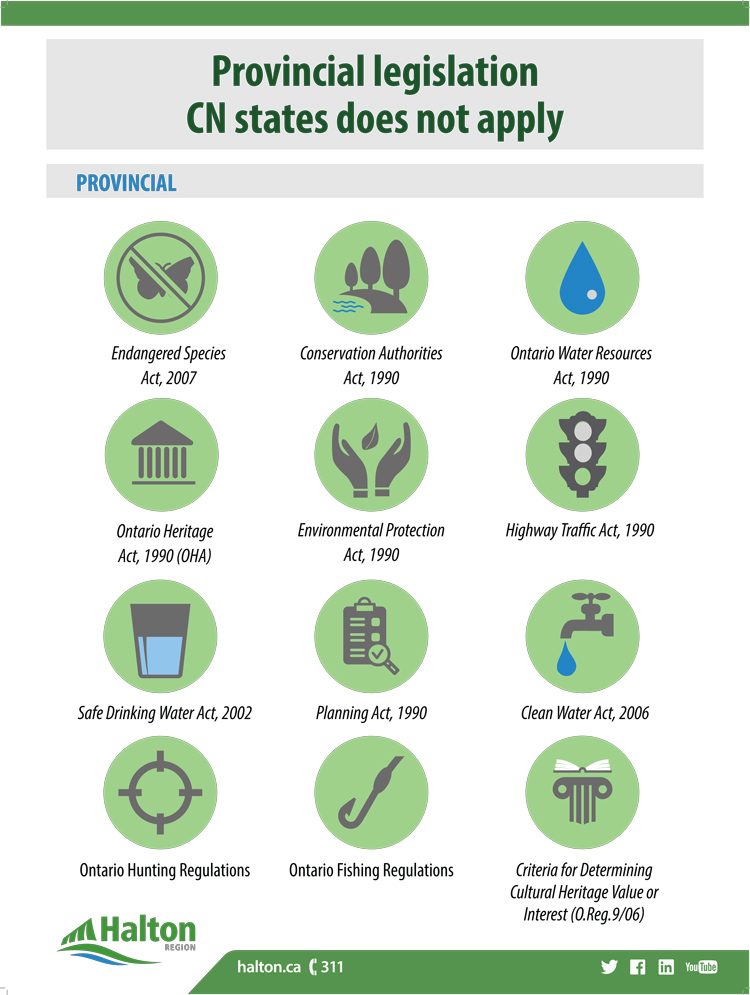 If CN doesn’t end up paying DCs, then taxpayers will have to foot the bill. Will businesses stay in Milton if they know their taxes will increase in order to cover the cost?

“We are not against CN; we are against where it is located,” the three councillors said. They gave some information indicating that there would be traffic alterations due to the presence of an intermodal hub in residential areas. Intermodals belong in heavy industrial areas due to their impact on the environment, noise and traffic.

Very little options are available to the Region in actually stopping CN. Like all municipalities, Milton is mandated to grow in certain areas by the province, as outlined in the Places to Grow Act. However, CN claims they are not bound by those rules as they reject the need for building permit.

But Halton Region’s stance is if CN’s position is accepted, then that would mean they, a for-profit company, would be allowed to self-regulate in areas that should be regulated by the province and municipalities.

One graphic that the councillors presented broke things down based on three numbers:

In answering a resident’s question regarding the number of jobs, Hamid said if it’s 30.5 jobs per hectare, CN should be creating 15,000 jobs, but CN estimated only around 100 jobs would be created. That doesn’t sound like a good investment, and there are health and environmental concerns to factor into this project.

If you’re wondering if CN had assessed other potential sites around Milton and Halton that were a better fit, Duvall said that they have not.

“CN has engaged, and continues to engage, local and provincial governments, Aboriginal groups, and community members on the project itself, to discuss solutions to mitigate potential effects of the proposed hub, and on ways to enhance potential local benefits of this critical infrastructure project.”

“The proposed project would provide much-needed infrastructure to facilitate the movement of goods through the region and across North America. One intermodal train can transport the equivalent of 280 long-distance heavy trucks, alleviating congestion on 400-series highways.”

Overall, by presenting this information the three councillors wanted to spur residents to get the provincial government involved (as indicated in the above video from the Region). Cluett, who once ran for the PC provincial nomination in Milton, said to residents “with two elections coming up this year, it’s a good time to put pressure on politicians running for election on where they stand on this issue.”

But there was a pessimistic tone in the air, despite the councillors’ efforts and the representatives from Milton Says No and Milton RAIL. “What’s the point of asking” the province, some residents shouted in response to Cluett, if Ontario has no jurisdiction in this area? Residents said they should be dealing with this matter at the federal level.

Ontario PC candidate for Milton Parm Gill, who also attended the meeting, said he is opposed to CN’s proposal and would be pressuring his PC colleagues to support Milton and Halton’s position should they happen to form the government after June’s election.

Residents also brought up how the Milton Chamber of Commerce is supporting this project, so people should be putting pressure on them instead. Scott McCammon, the president and CEO of the Chamber, provided this statement to inhalton.com regarding his organization’s position on the CN intermodal hub:

“The Chamber is first and foremost a pro-business organization and its primary roles are advocacy, fostering a business-friendly environment, economic development and allowing the free enterprise system to thrive.”

“The Milton Chamber of Commerce believes that the $250-million private sector investment CN will make in the Logistics Hub will provide critical infrastructure to grow the economy of the Greater Toronto and Hamilton Area and will result in significant economic growth of our business community, as well as attract more businesses to invest in our region. Cost efficient and environmentally responsible transportation of goods is a cornerstone to Canada’s trade agenda, and will better connect us to the global supply chain.”

“The Board is very conscious of the importance of balancing the needs of business with the needs of the community in order that both sectors may flourish. Please note that the Board’s support is subject to the final outcome of the environmental assessment and review panel decision, which is currently underway and may be completed in early 2019.  If the findings are not favourable, the Board will then reconsider its support of the project.”

And although there were people signing up with Milton Says No to participate in the opposition campaign, when the meeting was over most people headed straight for the exits. 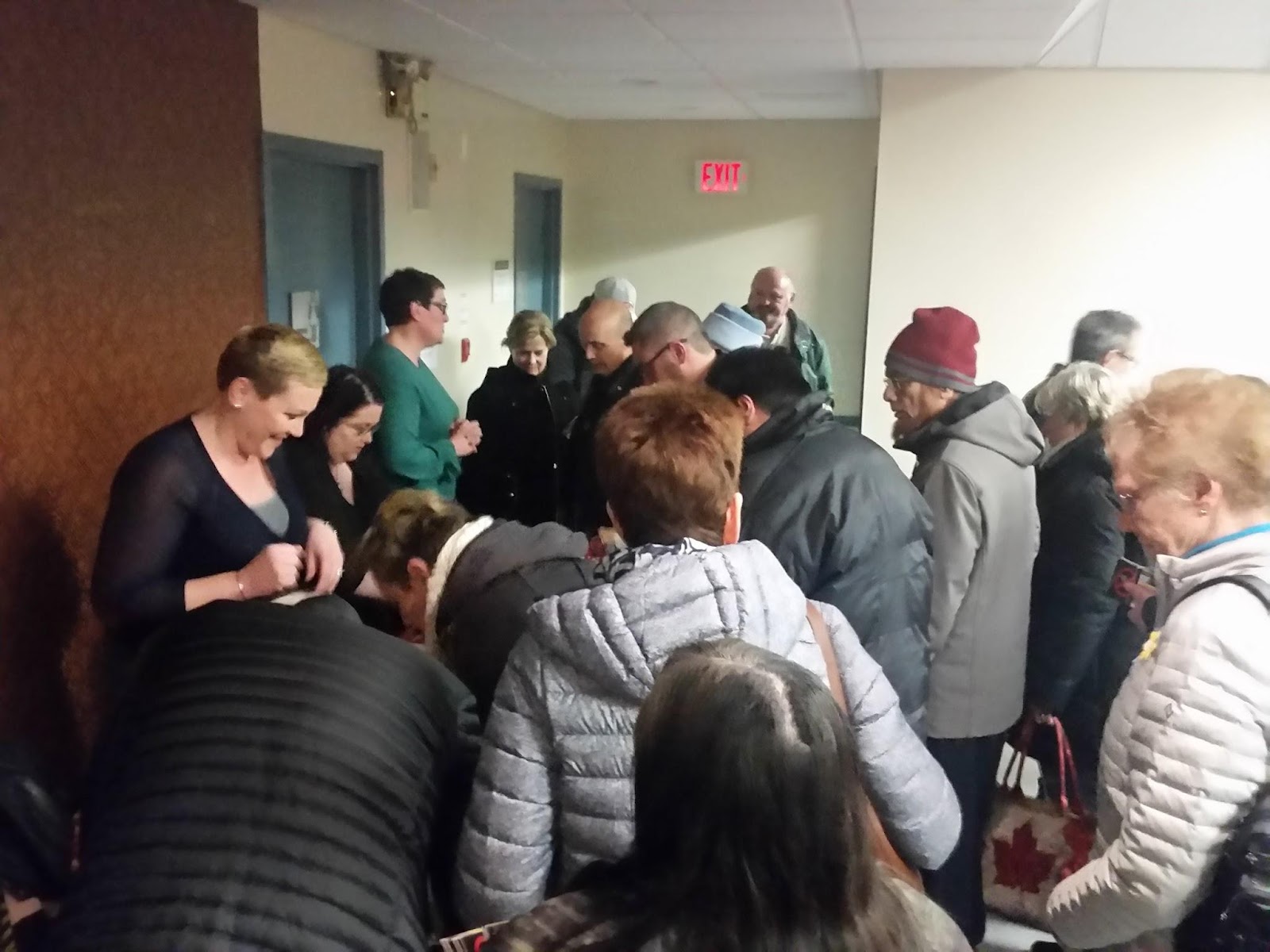 More detailed information can be found here and here.

What do you think of the CN Intermodal Hub possibly coming to Milton and Halton Region?