Milton residents, particularly those voting in the new Ward 1, were treated to a lively discussion on municipal issues by candidates running for mayor and council at the Southside Community Church recently. 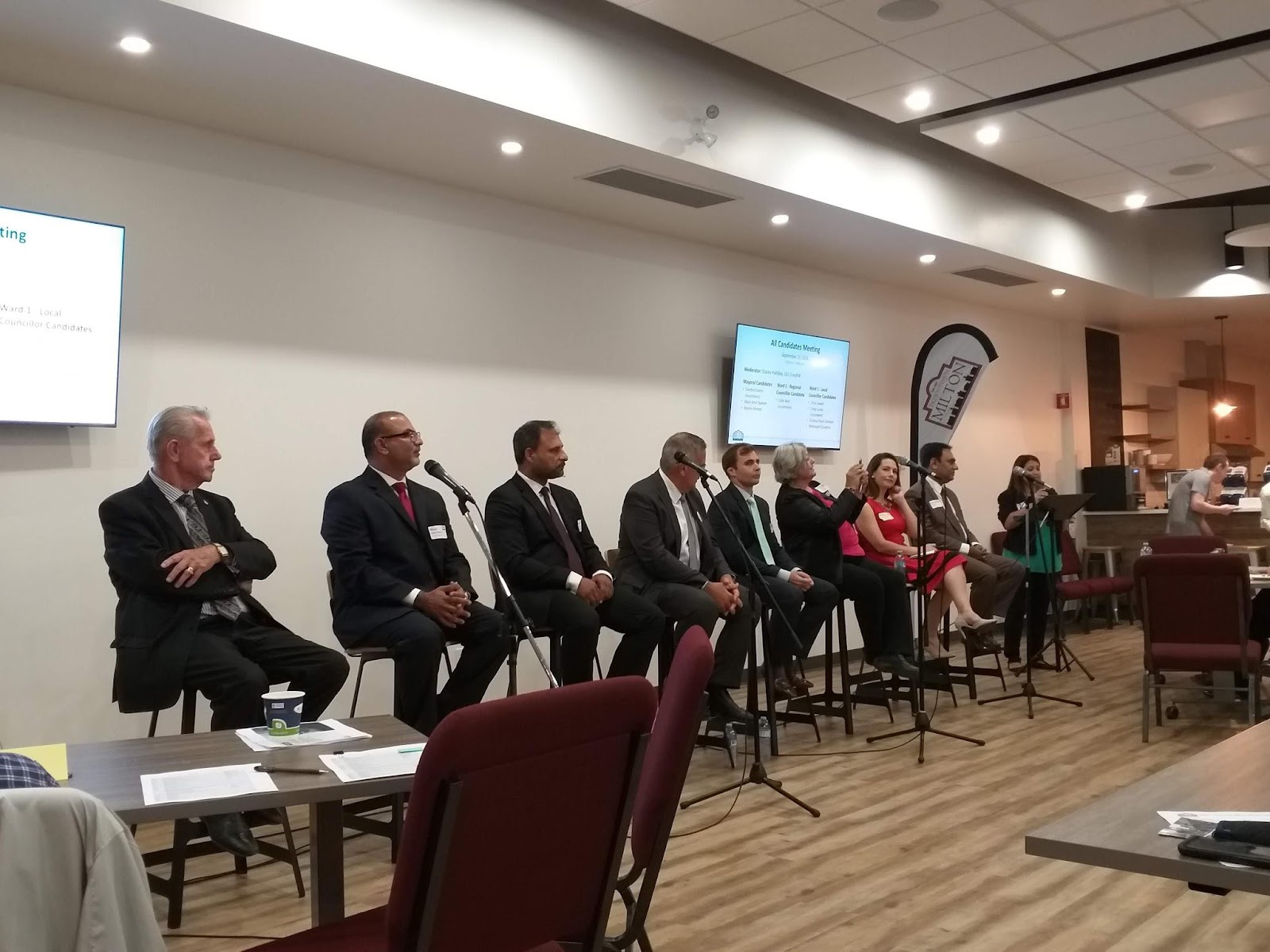 The all candidates meeting was organized by the Downtown Milton BIA, with the moderator being local Milton radio personality Stacey Halliday. 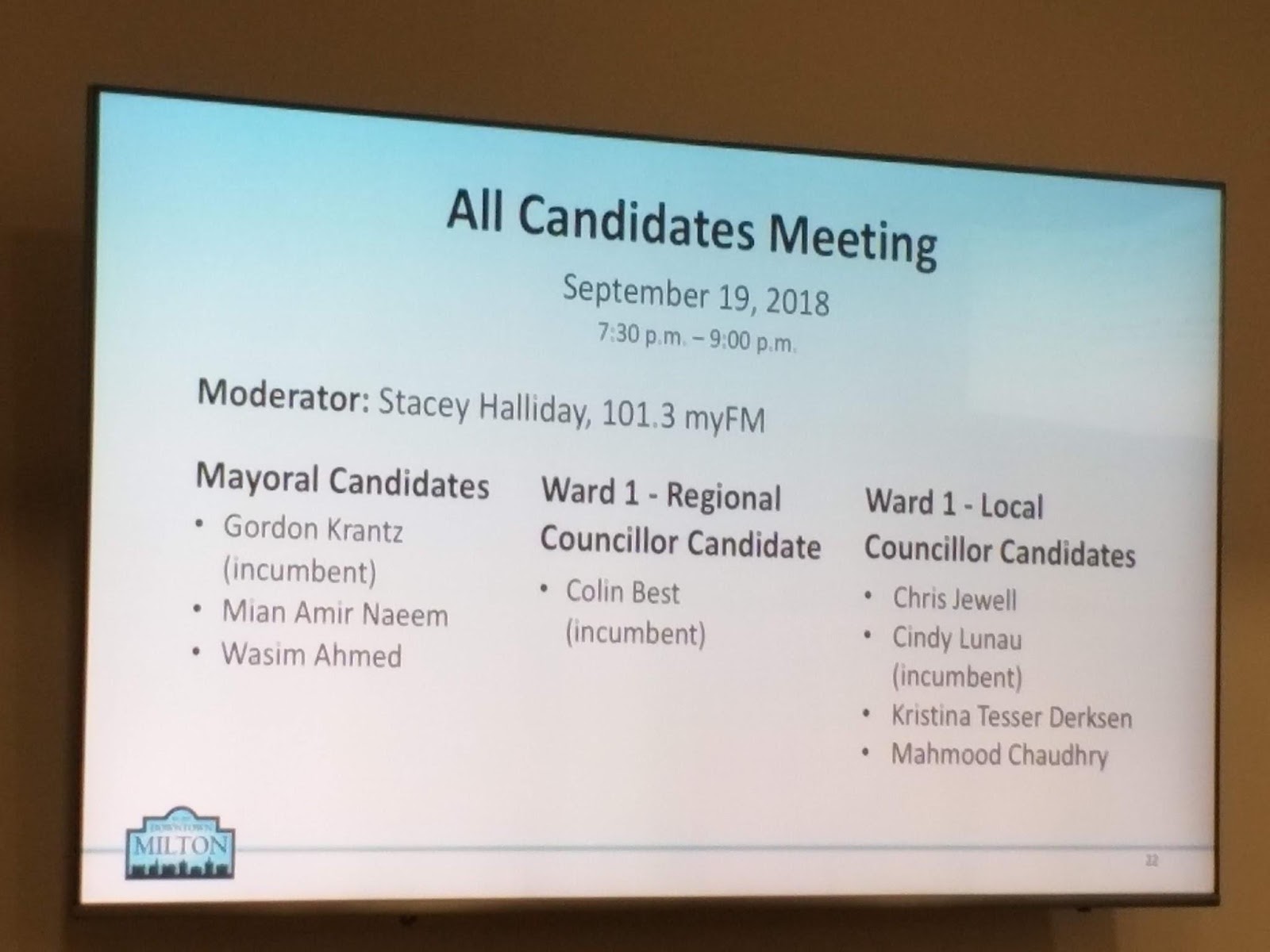 All mayoral and Ward 1 town council candidates were present, but Regional Coun. Colin Best was the only regional councillor candidate in attendance.

“In politics, showing up is most of the work,” Best said to a round of applause, paraphrasing an old Woody Allen quote.

While Mayor Gord Krantz and Best were able to lean heavily on their years in office to answer questions about these issues, the other candidates also offered new ideas and perspectives that warrant attention. 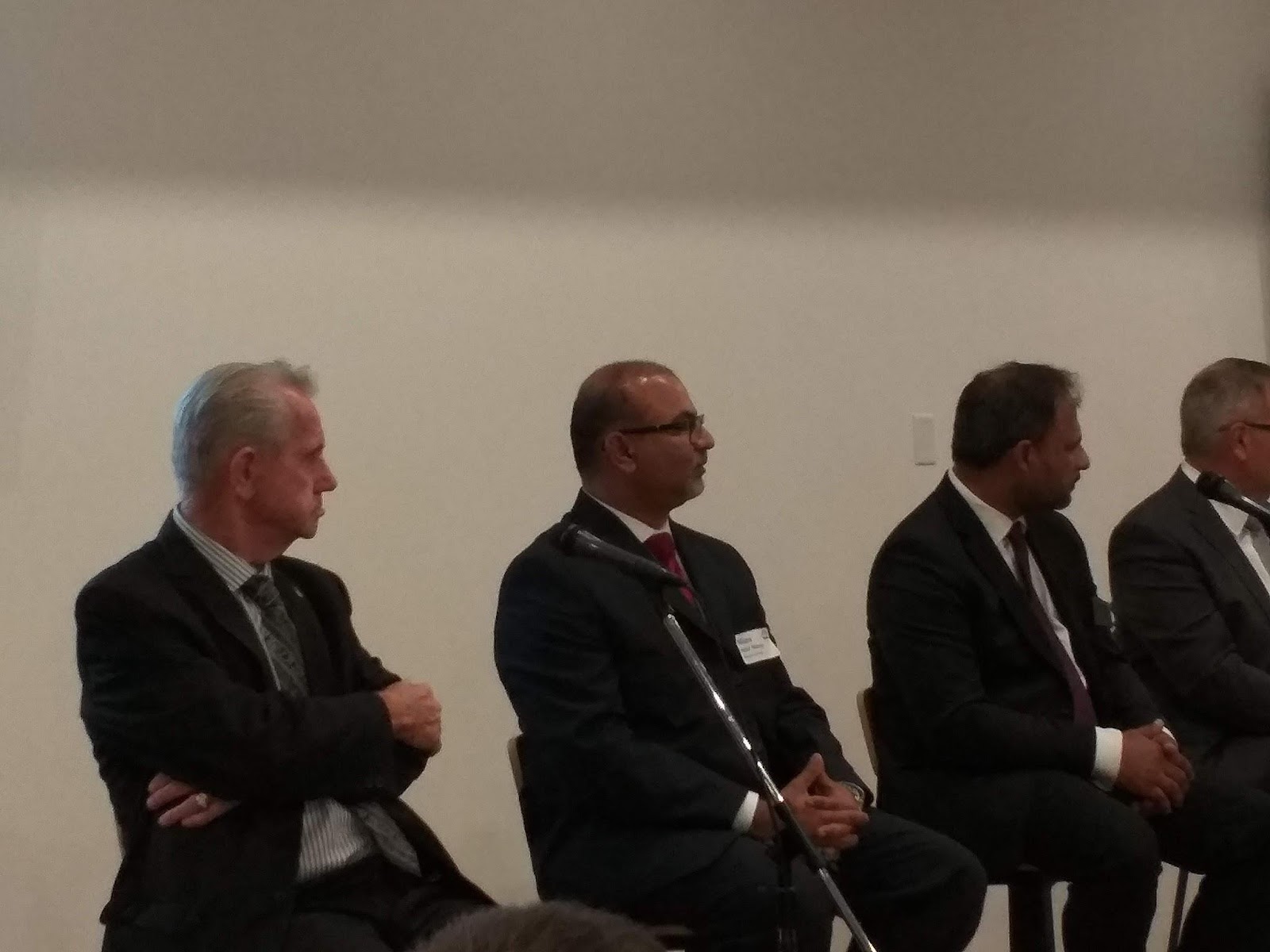 Krantz, mayor since 1980, may be unbeatable but that didn’t stop Mian Naeem and Wasim Ahmed from sharing their own ideas on what they would do as Milton’s chief magistrate.

Naeem, who has a background in computer science, spoke about how Milton needs to adapt to an increasingly urbanized world, saying things like smart traffic lights can regulate safer traffic and risk mitigation technology that can address flood prevention.

“We are still of the mindset of running this community like a small rural town.Milton needs to adopt ‘smart city’ strategies,” Naeem said in response to a question about how to make downtown safer and reduce crime and drugs in the community.

Ahmed is a local businessman also running for mayor, but aside from saying the need to work with downtown businesses to grow the area and do upkeep on heritage buildings, he was not saying much that really stood out. 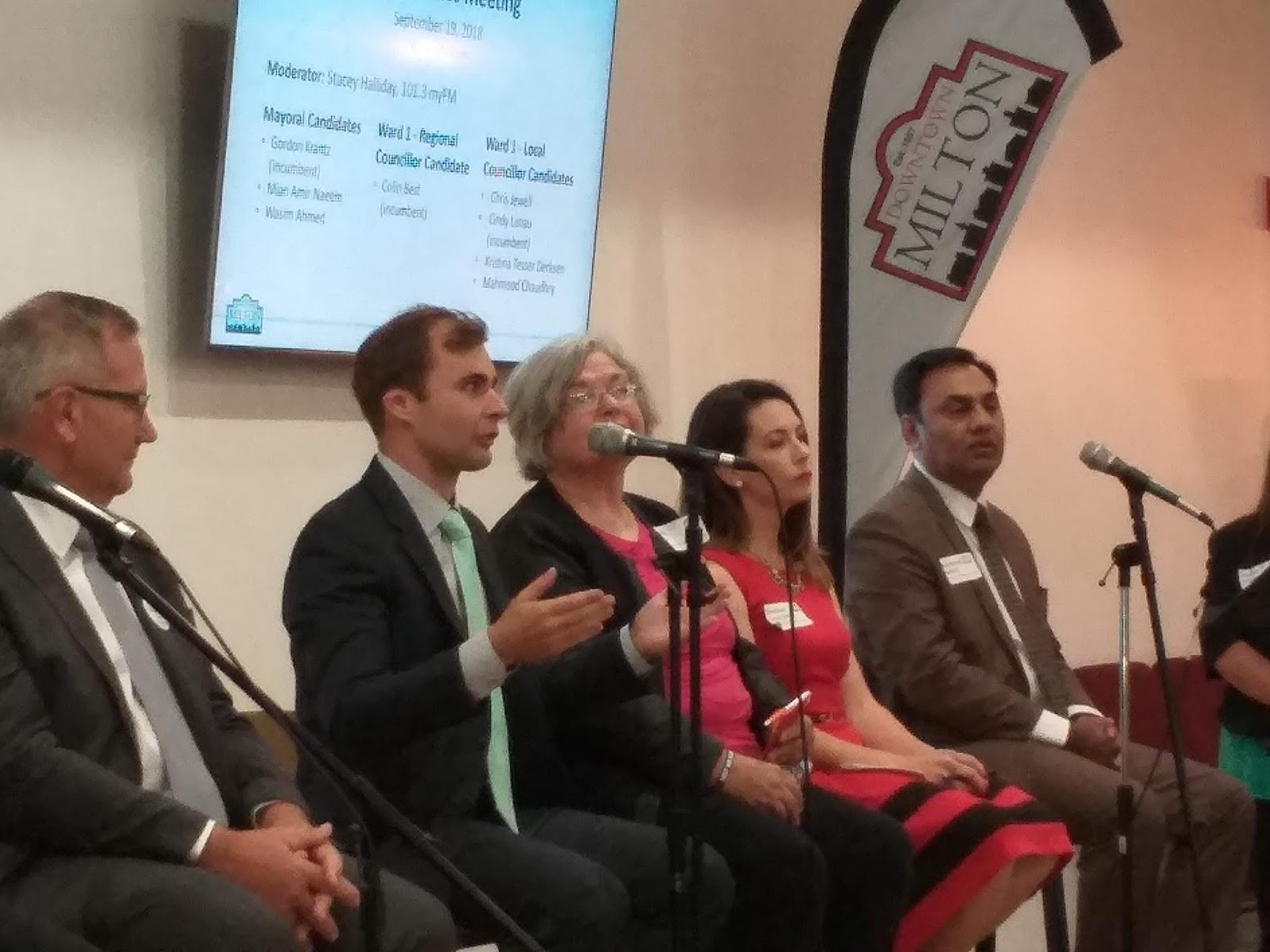 While incumbent Cindy Lunau leveraged her experience in her reelection bid as Ward 1 councillor, candidates such as Chris Jewell and Kristina Derksen portrayed themselves as new energy with different types of experience: Jewell works in the construction industry and Derksen is a lawyer who runs her own practice.

Jewell said his background in construction would give him a better handle on future developments and get them under control. “We need to see what we can do to get construction going again, cut through the red tape, and I know how to do that.” Derksen suggested examining if it is worth it to redevelop on the floodplain as well as reducing bureaucratic red tape.

A number of questions delved into areas that were outside Milton’s control. Flooding has become a major concern, but in terms of amending floodplain regulations Best said that was under provincial jurisdiction, although Lunau suggested that mapping technology could enable a remapping of the flooding area.

On another question that had more to do with the provincial or federal government, that of keeping Milton safe from crime and drugs, candidates offered solutions such as traffic calming measures, keeping the streetscape lit, reducing speed limits or more police. Drugs were a major concern, as the opioid crisis is a fast spreading epidemic in Canada. 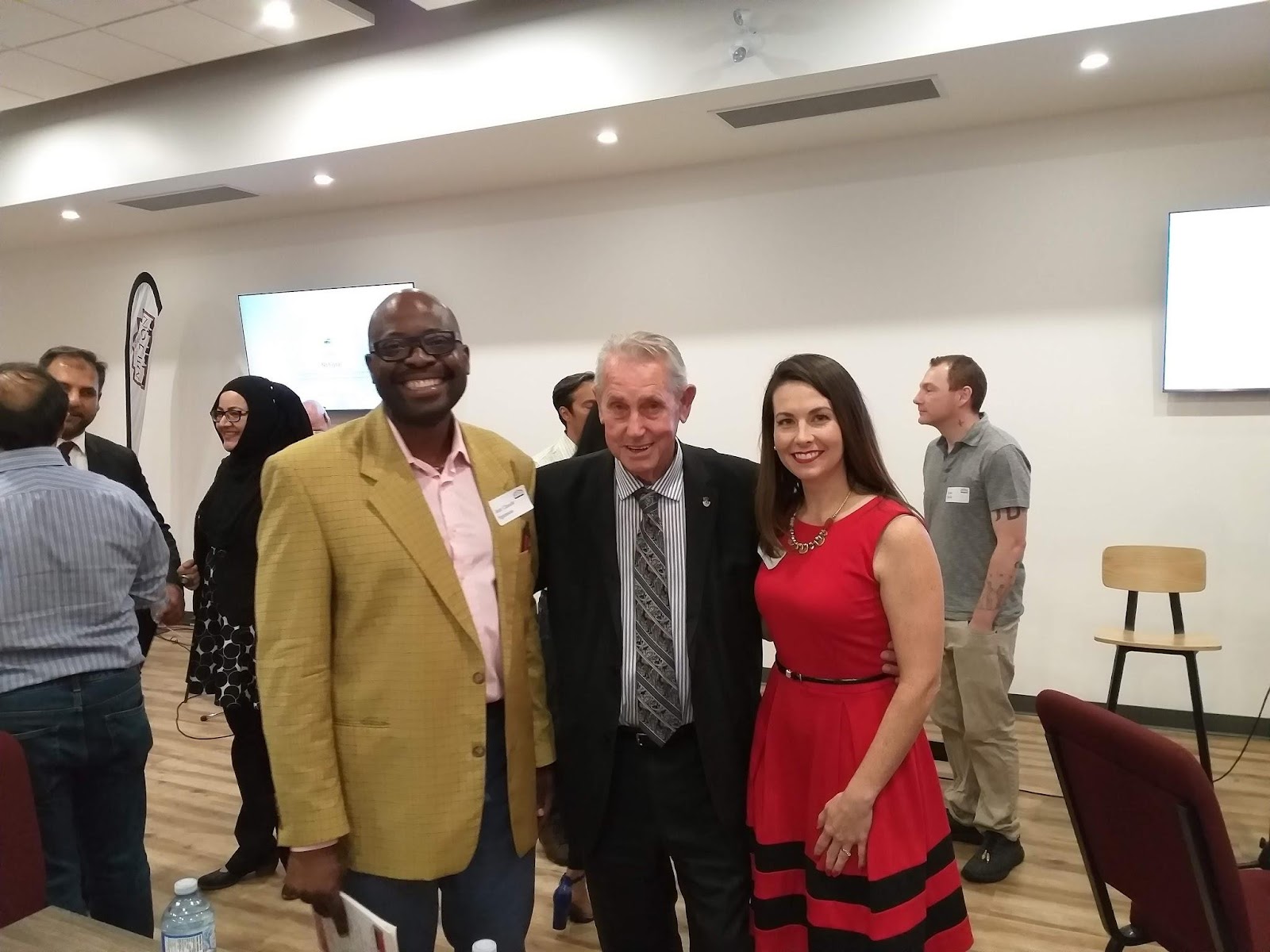 However, there were some interesting comments pertaining to crime and marijuana legalization, as stated by Jewell and the mayor.

Jewell said he door knocked on some homes of police officers, and they told him that the low crime rates were being inflated in order to keep them low, in order that Halton Region keep up with the statistic of being a safe community. That would be quite extraordinary if that accusation can be substantiated.

Mayor Krantz had a question of his own to the members of the BIA. “I put this back to you: would you support locating a marijuana shop in downtown Milton?”, Krantz asked as the debate neared the end. Most of the other candidates agreed that legalized weed was coming; the challenge going forward is how to properly administer the system.

One final issue that came up was how to bring more events into the downtown area. Derksen said she supported streamlining the permits system and the Civic Precinct District. But Jewell asked if anyone tried getting a permit for any event in Milton, citing the difficulties in doing so, especially if English is not the applicant’s first language. “We need a one stop shop,” regarding permits, he said.

Mayor Krantz brought up the issue of issuing permits to every type of event, noting that fees would need to increase if certain events required hiring police officers to provide security.

Overall, Krantz and Coun. Best appear to be heading into an easy reelection, as people still appreciate experienced politicians to sift through the number of important issues Milton faces such as development, flood mitigation, crime and incoming marijuana regulations.

But it’s also important to get some fresh perspective as well, and Ward 1 would be well served with either Jewell or Derksen as the new town councillor.