A few weeks ago, an Angus Reid survey revealed that the lack of affordable housing in Toronto and the overall GTA is making people miserable (their words, not ours).

Now, in news that comes as a surprise to no one, an RBC Economics survey has revealed that Canadian homes are becoming hugely–and concerningly–unaffordable.

Canadian housing affordability is now at its worst level since 1990, according to the latest Housing Trends and Affordability Report issued by RBC Economic Research. 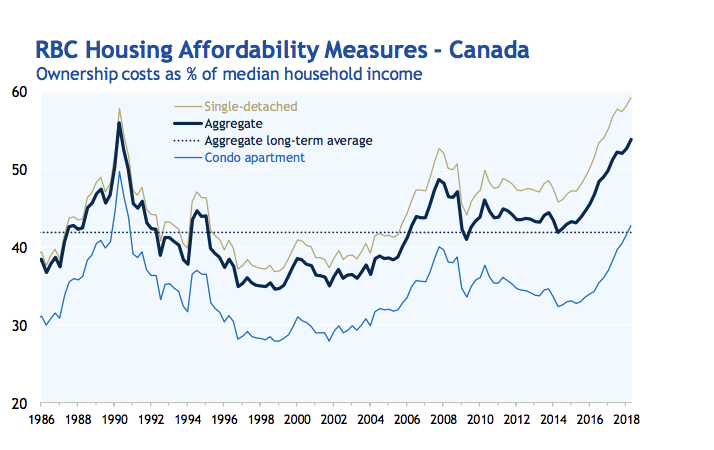 While it’s true that housing prices have come down from the wild highs they reached in winter 2017, homes remain expensive. In fact, recent data released by the Toronto Real Estate Board indicates that detached houses are still selling for over $900,000 in the 905. Condos, which are the last affordable housing type, are costing GTA buyers about $450,000.

Not surprisingly, RBC says condo affordability has eroded more than single-detached homes this year in Canada.

“Unaffordability remains off the charts in Toronto and Vancouver, with higher interest rates affecting nearly all Canadian markets in the second quarter,” the report reads.

According to the report, RBC’s aggregate housing affordability measure rose to 53.9 per cent in the second quarter of 2018– up significantly from 43.2 per cent just three years ago.

The report says that skyrocketing home prices in some of Canada’s largest markets gave the initial push, but it’s been rising interest rates that have been driving the measure to near-record levels in the past year. 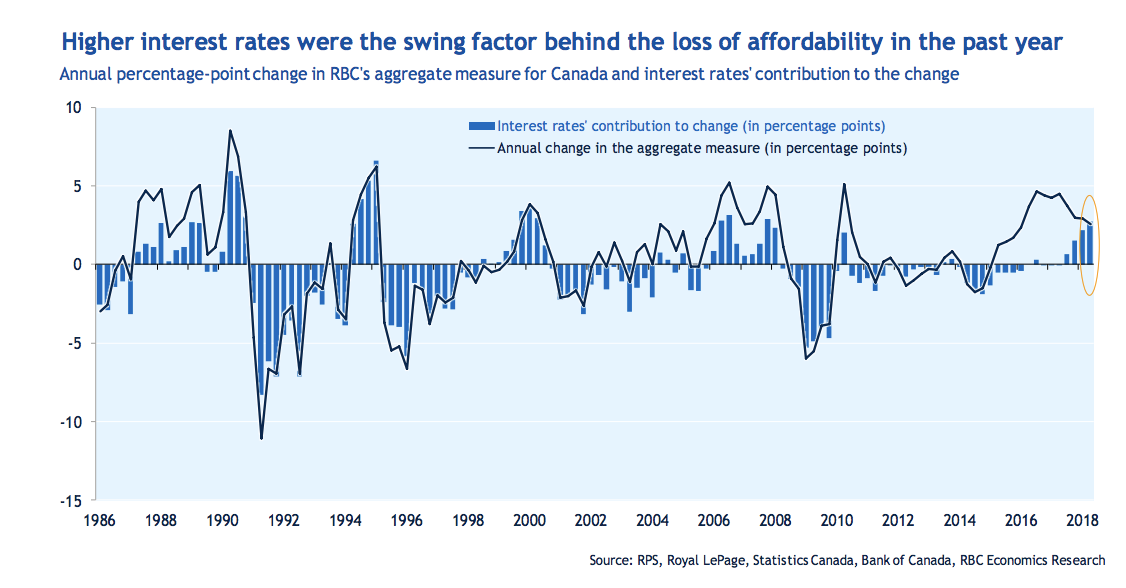 The financial institution says its housing affordability measure is calculated as a share of household income. A higher number means that buying a home is less affordable.

The report emphasizes the fact that recovering interest rates–which have been incredibly low since the 2008 recession–are making buying even more difficult for prospective homeowners.

“A lift in borrowing costs accounted for virtually the entire 2.6 percentage-point increase in RBC’s measure in the past year and most of the 1.1 percentage point advance in the second quarter of 2018,” the report reads, adding that the newly implemented stress test (which requires buyers to qualify at higher rates than they’ll actually end up paying) has made buying even more challenging.

“The grim outlook for prospective home-buyers will likely continue in the near term,” said Craig Wright, senior vice-president and chief economist at RBC. “We anticipate the Bank of Canada will proceed with further interest rate hikes well into 2019. This will keep mortgage rates under upward pressure and boost ownership costs even more across Canada.”

The report points out that condos, which are typically more affordable, are becoming increasingly more expensive.

In fact, condo prices are rising faster than detached housing prices in some areas, including Toronto.

As expected, the Toronto and Vancouver areas are disproportionately affected by escalating home values.

According to the report, affordability conditions remained “extremely strained” in Toronto and Vancouver in the second quarter. RBC’s aggregate measure for the GTA rose by 1.8 percentage points to 75.9 per cent – meaning a typical home buyer would need to spend an astounding three quarters of their income to cover ownership costs.

Sadly, conditions are not likely to improve.

“The prospect of further rate hikes doesn’t bode well for Toronto or Vancouver buyers, whether they’re on the look-out for a condo or a single detached home,” said Wright. “Affordability pressures are likely to become an even bigger issue for them, which we believe will limit how much home resale activity will rebound from its recent cyclical low.”

RBC says that in nearly all other Canadian markets, higher interest rates had a modest negative effect on affordability in the second quarter though conditions generally remain manageable.

Overall, potential buyers hoping to get a meaningful break in affordability will likely be disappointed.