Oakville is one of the fastest growing municipalities in the Greater Toronto Area and one of the most coveted places to live.

Oakville is one of the fastest growing municipalities in the Greater Toronto Area and one of the most coveted places to live. I personally have several friends who have recently moved there for the town’s quality of life and the feel of having that quaint small town feel (a big change of scenery after commuting from work in Toronto).

Those sentiments are somewhat reflected in Oakville’s recently released its 2017 annual report, providing residents with an overview of the town’s financial health and what the money is being used for.

The report also includes a snapshot of the town’s key achievements in delivering on the goals set out in the town council’s 2015-2018 Strategic Plan.

“Our annual report shows that the town works just as hard on maintaining strong financial health and good fiscal management as we work on always lifting our livability,” said Oakville Mayor Rob Burton. “I am proud to share the facts and figures of our success with residents and community partners who I believe are just as passionate about Oakville’s future as council and I are.” 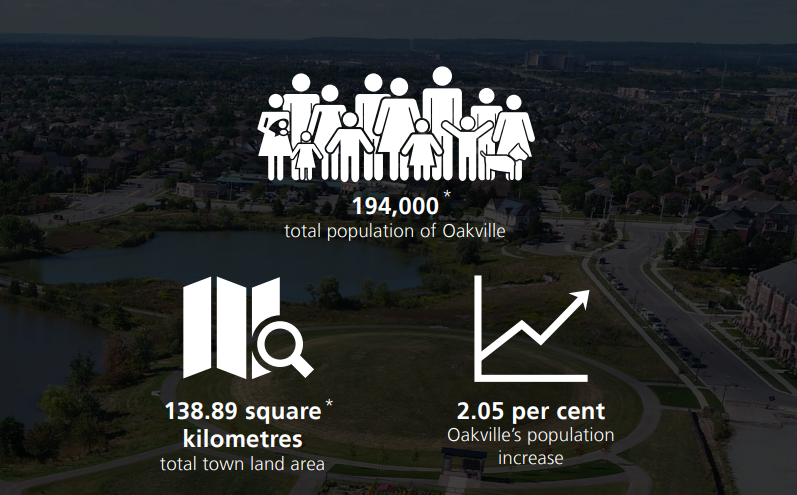 An outside audit of the town’s finances was conducted by KPMG, with council’s five key areas of focus outlined in the Strategic Plan: good governance, environmental leadership, economic growth, fiscal sustainability and outstanding service to residents.

Some of the town’s accomplishments in 2017 include:

Here are some of the highlights from the Oakville 2017 Annual Report: 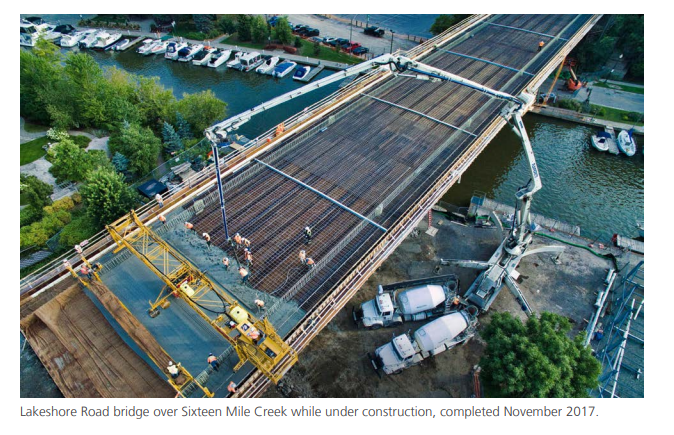 Completed last November, the Lakeshore Road bridge now includes two travel lanes and bikes lanes, a wider pedestrian sidewalk with a barrier wall to separate the sidewalk from vehicles, as well as pedestrian railings and lookouts are complete with LED lighting.

Ongoing work is continuing on the Brownfield Redevelopment Strategy and community improvement plans for privately owned lands in Oakville that were previously used for industrial or commercial purposes.

What Oakville is Spending Money On

The report identified some key budgetary challenges Oakville will be facing and various expenditures, such as:

Oakville Transit made two important changes to its service. Transit service returned to Burloak Drive on Route 14 and 14A with service on the western portion of the route split between Great Lakes Boulevard and Burloak Drive.

In addition, Home to Hub service arrived in parts of southeast Oakville. Customers can book their rides in advance, get picked up at the end of their driveway and dropped off at the Oakville GO station or Downtown Oakville (Church and Dunn Streets) to make connections with conventional transit service.

The purpose of reviewing the sign by-law was to see how signs could better allow businesses and groups to communicate with residents, while supporting public safety and maintaining the character of Oakville streetscapes. A draft by-law will go out for public consultation and will be presented for Council approval in late 2018 or early 2019.

Here are some of the details from the report by KPMG: 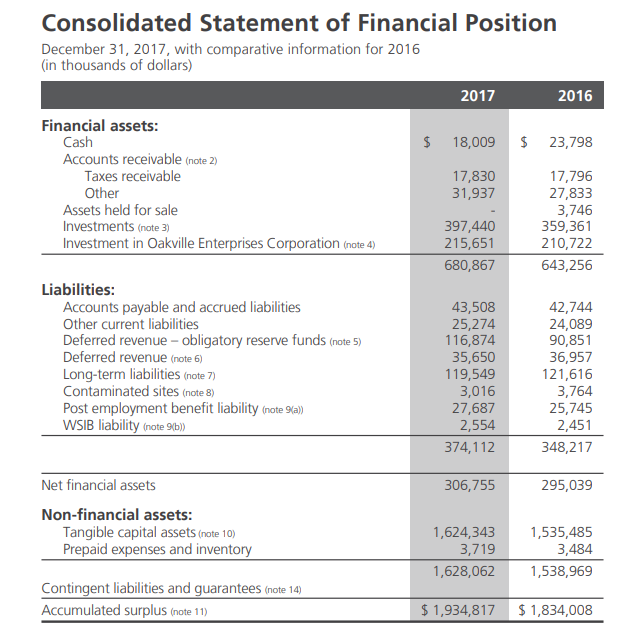 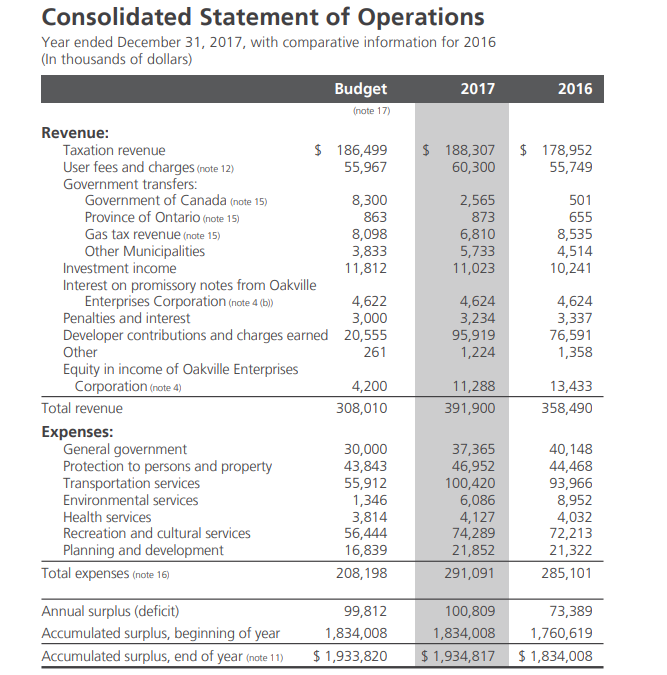 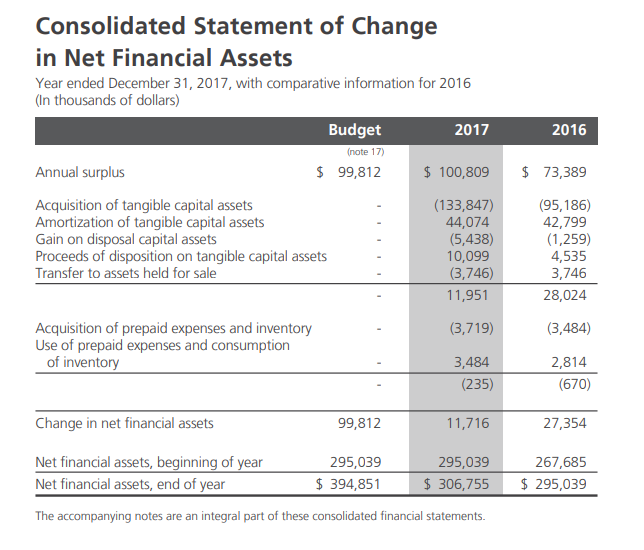 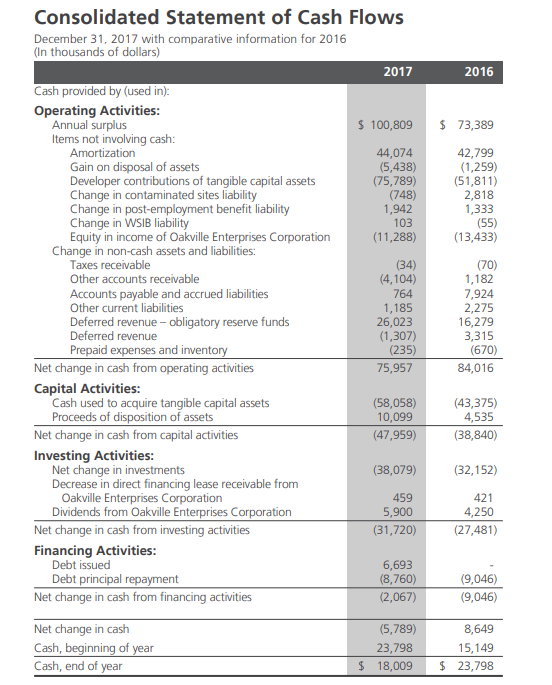 You can read the rest of the audit if you’re interested in doing deep dives into municipal accounting.

Overall, the state of Oakville looks pretty decent, and backs up a recent Moneysense survey ranking the town as one of the 50 best places to live in Canada.

But of course, all these statistics are based on your own perspective of how your community is doing.

Do you agree with the rosy picture of Oakville as outlined in this annual report?