The quantity of housing is becoming an increasingly important issue in the years ahead, what with real estate prices in the state they’re in and the lack of affordable housing in the Greater Toronto and Hamilton area.

The quantity of housing is becoming an increasingly important issue in the years ahead, what with real estate prices in the state they’re in and the lack of affordable housing in the Greater Toronto and Hamilton area.

Now, there’s a risk that there won’t be enough in the next few decades.

According to a new report from the Residential and Civil Construction Alliance of Ontario, The GTHA is at risk of missing provincially mandated population targets.This would potentially result in 7,200 fewer new homes being built each year until 2041.

It would also mean that the GTHA is at risk of not building 165,000 extra homes within the next 23 years.

The crux of the matter is that there isn’t enough what is known as “Missing Middle Housing”, according to the RCCAO, in comparison to the standard detached/duplex and semi-detached homes as well as high rises.

“Hamilton has made the most progress on the ‘Missing Middle’. Toronto, Mississauga, Markham, Newmarket less so, while Brampton is biased towards lower density starts,” says Paul Smetanin, President of the Canadian Centre for Economic Analysis, a socio-economic research and data firm.

As shown in the graph below, Toronto and Mississauga have the most pronounced change towards higher density dwelling formations compared to the makeup of their current housing stock. Brampton, Newmarket and Brock Township have the lowest. 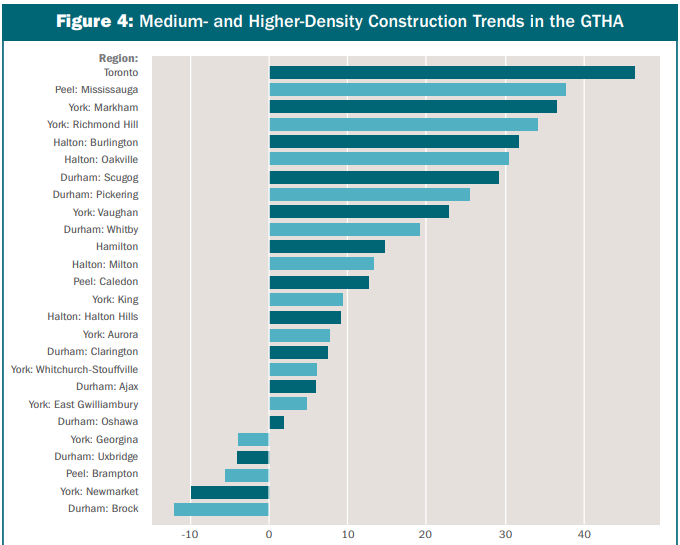 Here’s another chart, showing the characteristics of housing types in the various GTA regions: 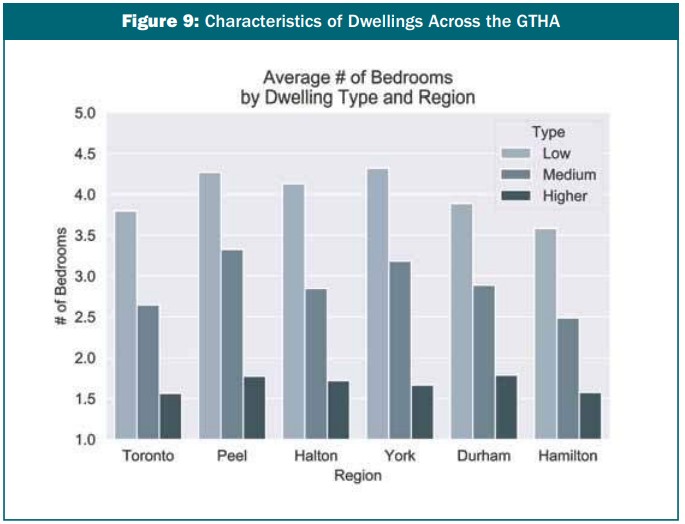 The report also highlights a number of issues among the most populated GTA municipalities:

Andy Manahan, executive director of the Residential and Civil Construction Alliance of Ontario, said: “We commissioned the report because we wanted to find out what the possible impacts of LPAT will be on delivering housing. We will work with provincial and municipal government officials to help ensure that the transition to the new LPAT system is as seamless as possible and does not create negative consequences for the housing supply in the province.”

The entire report from RCCAO can be read here.

The issue of “the missing middle” in terms of housing has been discussed thoroughly before, as Ryerson also issued a report about it for Mississauga.

It looks like builders and developers really need to start looking at more than just houses and high rises if they want to ensure the housing market is still viable in the coming decades.