House of the Week: $5 Mil Stunning Lot in Burlington

The Ontario PC Party announced during the provincial election this past June that they were not planning to go through the scheduled minimum wage hike come January 2019 to $15 an hour.

However, the government under Doug Ford may be taking one step further by repealing an entire piece of legislation that was designed to protect vulnerable workers, to the chagrin of many and the delight to some.

Bill 148, the Fair Workplaces, Better Jobs Act, was brought in by the previous Liberal government and passed into law. The bill was designed to protect workers and modernize workers’ rights by doing the following: 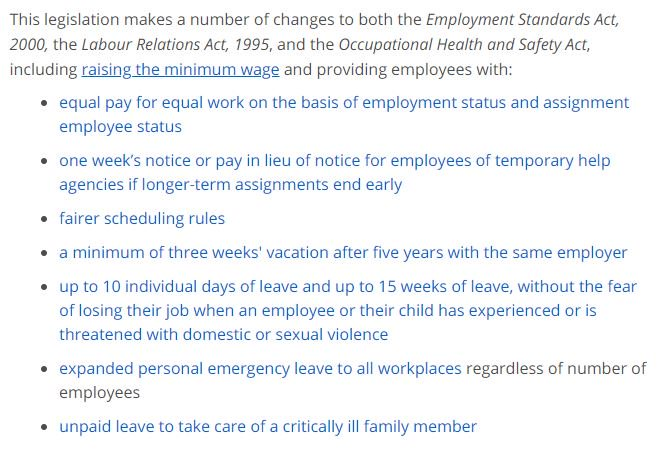 Ford stunned many when he announced plans to repeal Bill 148 during Question Period this week when asked by Liberal MPP Michael Coteau, particularly if the Tories planned to repeal the 2 sick days workers are afforded under the law.

“We’re going to tell the world that Ontario is open for business; we’re getting rid of Bill 148, we’re going to protect front line workers because 60,000 people lost their jobs under Bill 148!”, Ford replied, saying that when he traveled across the province, people were telling him mainly to get hydro rates under control and to repeal the legislation.

Doug Ford is now vowing to make things even worse for Ontario's workers.
His comment about rolling back labour laws was troubling to every mom who counts on those sick days, & every worker who earned vacation time with their family. Taking things away from workers is wrong. 1/4

“One government after another has left Ontario’s workforce without the improvements they deserve and need to build safer, more equitable workplaces and a better work-life balance. We could be making sure everyone gets paid $15 minimum wage, guaranteed paid leave for victims of domestic violence and providing sick time,” Horwath continued in her tweet, saying this is all to benefit Ford’s “rich friends in big business”.

However, there are supporters of the Premier’s move, such as Catherine Swift, the former president of the Canadian Federation of Independent Business.

Majority of unions are now in govt. Having overpd govt empees extracting more taxes from priv sector taxpayers who earn less is clearly not good for majority of citizens. Bill 148 hasn’t even been in force for a year. Going back to 2017 rules is hardly apocalyptic. https://t.co/rGPMdOwivZ

But it seems the government was not as clear as they should have been, considering that after Ford’s declaration, Economic Development Minister Jim Wilson told reporters at Queens’ Park that they were still reviewing the legislation, emphasizing that they were going to keep sick days and the $14 minimum wage.

Ford did say in his supplemental reply to Coteau that his government was giving minimum wage workers a tax credit, reducing their taxes by $850 as an alternative solution.

There is an old adage that says “you campaign in poetry, but you govern in prose.” It seems Ford is still campaigning in the election if he is giving answers like that, and it comes off as discombobulated as his own ministers seem to contradict him; Ford is declaring that Bill 148 will be repealed but his own minister says “that’s under review”.

Overall, Bill 148 was meant to protect those of us who don’t have a high paying job and are vulnerable if some unforeseen circumstances disrupt one’s ability to make a living. This government needs to be clear about what alternatives they have for working people in Ontario.

What do you think of Doug Ford’s idea to repeal Bill 148?