Burlington fourth among Canadian cities for average monthly rent in May

The idea of “Mobility Hubs” around Burlington’s three GO stations was introduced last December after a series of public consultations, with the purpose of providing a concentrated point for a variety of uses such as transit, employment, housing, recreation and shopping.

Mobility hubs are intended to be neighbourhoods that are environmentally friendly, infrastructure-efficient, walkable, bikeable and transit-oriented. In Burlington, the mobility hubs will be planned and developed near the Aldershot, Burlington and Appleby GO stations as well as in the downtown.

During the July 12 Committee of the Whole, city staff reiterated the need to focus growth and development around these hubs because Burlington has nearly run out of land to build on, and the city’s policy is to protect and maintain the rural areas to the north.

As the three GO stations have the potential to be linked to a future regional express rail network, staff said there is opportunity to increase density around those three stations. Downtown Burlington itself is also designated as a hub.

Below are three graphics showing a more detailed depiction of each hub: 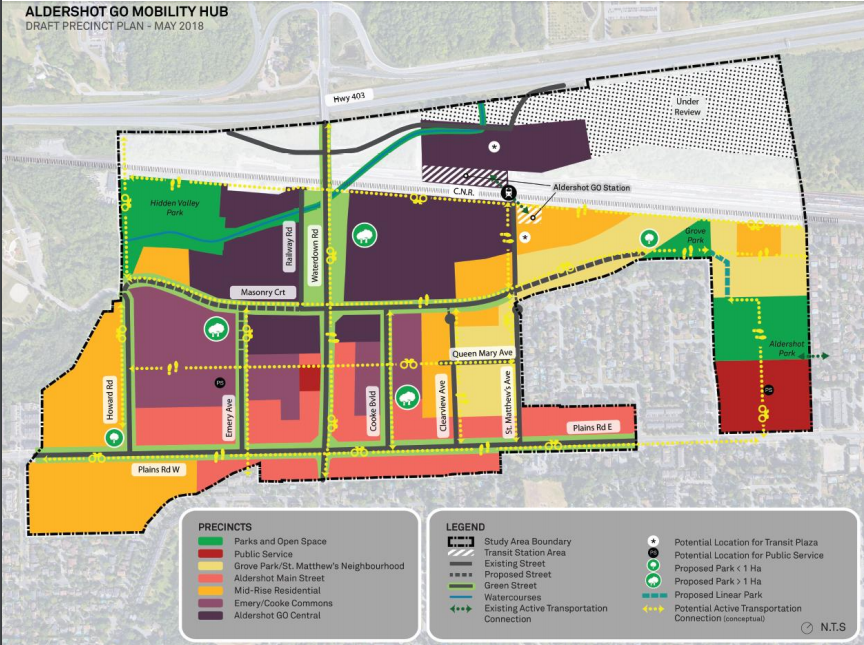 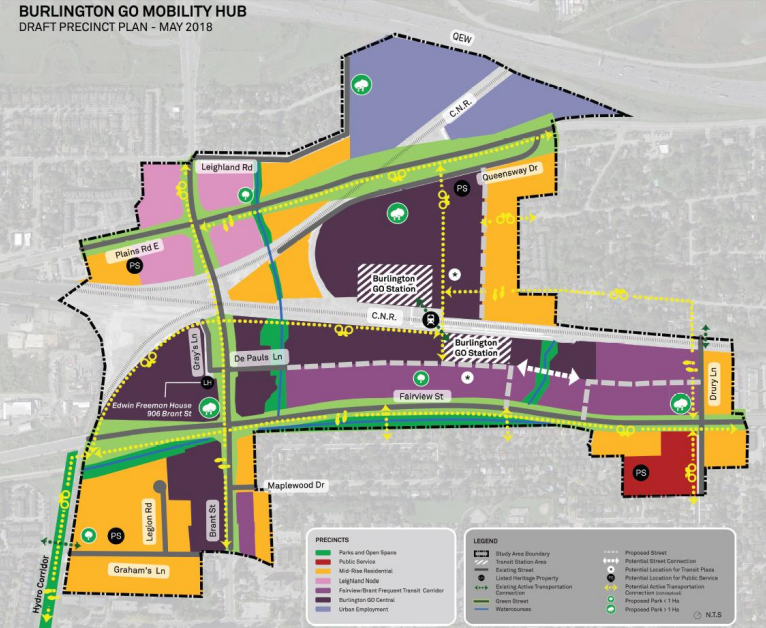 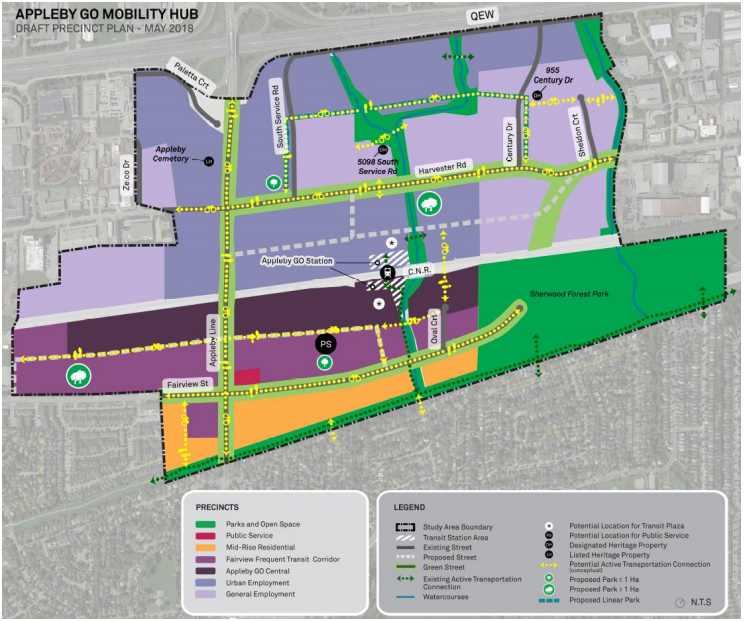 During two open houses held back in May for all three hubs, there were a number of comments from residents who attended:

This last point regarding the issue on Clearview Avenue was something Ward 2 Coun. Marianne Meed Ward pointed out during the committee meeting. Clearview was being redesignated as high density with a possible 11 storey building, which is an area that traditionally had been a low density neighbourhood. 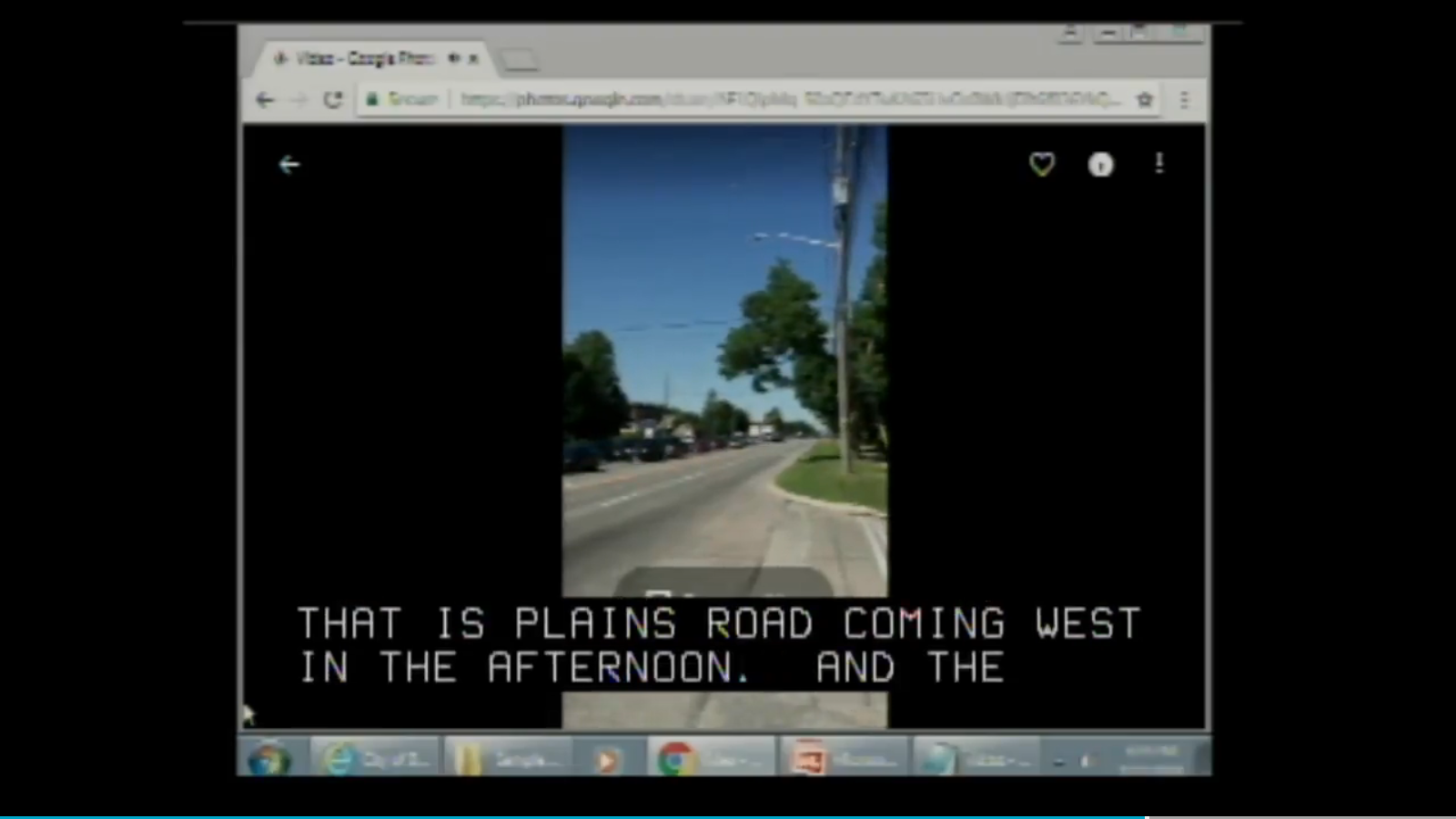 Meed Ward added a video in her presentation from a resident showing traffic conditions Plains Road intersecting with Clearview during a regular afternoon. “At this point the residents aren’t so much as asking for a traffic signal but asking not for further high density on that street,” Meed Ward said in her remarks.

Ward 1 Coun. Rick Craven said one of the reasons a traffic signal was installed on St. Matthews Avenue was to provide relief to Clearview, so those who wish on Clearview who wish to get out on Plains Road during rush hour, go along Queen Mary to St. Matthews where the light is.

Another councillor, Paul Sharman raised concerns over potential micromanaging of the mobility hub on issues like the Clearview matter. “Isn’t this seem like a bit of micromanaging in terms of traffic in one specific plot of land, instead of looking at the wider picture?”

Sharman added that he looked forward to continuing his work on this file when he’s re-elected in October.

In the end, Craven said he would prefer to deal with the issue of Clearview now, rather than let it simmer over the coming months in the election, as candidates jockey to replace him as Ward 1 councillor (Craven is retiring). He moved the following motion for staff direction, which was passed unanimously:

“This precinct is low density, and allows only single family homes, semi-detached and street townhouses.  Clearview never should have been included for high density. This is a stable low density residential neighbourhood and needs to remain so,” Meed Ward said in her blog post.

The entire plan will come back for council approval in 2019, after the municipal election.

“This is our LRT; except with buses,” said Coun. John Taylor, noting that it will take up to 50 years for the full plan to come to fruition.