Is This Uniquely-Shaped Condo Coming to Burlington?

For those of you already well into, or quickly approaching, your golden years, there is a new condo development that might be just right for you…or not, depending on how you feel about high-rise condominiums that have been proliferating in Burlington these past few years.

The last few developments have been rather contentious, with the City of Burlington requesting a review of the decision regarding the 26-storey Nautique condo at 374 Martha St. that was recently approved by the Ontario Municipal Board.

Ward 2 Coun. Marianne Meed Ward recently posted about six new development applications coming before the city in her new blog, which has a format that conspicuously resembles a re-election campaign website. Most of them are the standard stacked townhouses or high rises that inhalton.com has previously written about, but one of them stands out for its unique outer structure and architecture.

TRG New Guelph Inc., the developer, has submitted an application to build two 11-storey residential buildings at 2421 and 2431 New St. that would be joined by a bridge connection. The location is just outside the city’s downtown area:

Currently, the land is occupied by a small strip mall containing a laundromat, massage and chiropractor clinic, a tattoo parlour and other businesses. The site also has the Easterbrook’s Red Hot Grill. The applicant is proposing to replace them with this: 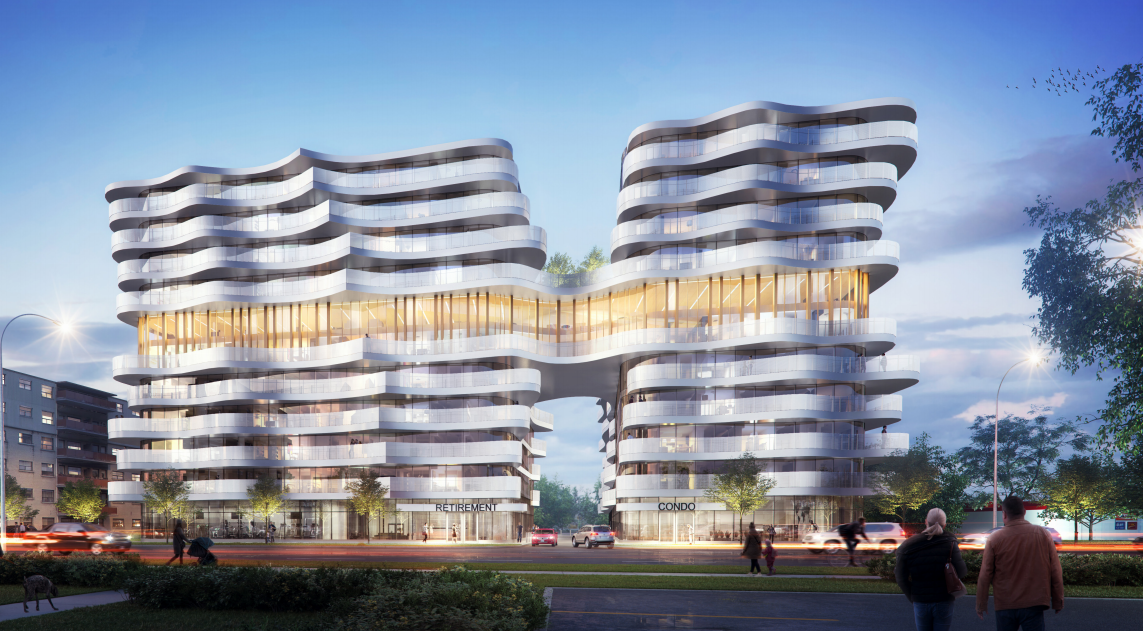 As the applicant explained in their urban design presentation, the undulating configuration and the bridged connection of the buildings suggest inspiration from the waves of a lake and the bridges that span across these bodies of water.

There are precedents that have an influence in this particular stylistic expression, such as:

TRG New Guelph also argues that their building provides an attractive public realm, as the siting of the podium and the layout of its internal uses help to create active and vibrant building frontages along the streets.

The main building entrances are directly facing, and can be accessed from New Street, that presumably would stimulate pedestrian activity at and near the entrance areas. Streetscape animation is furthered by the placement of amenity areas along the streets.

There were also a variety of studies submitted with the development application, such as architectural drawings of the building from the side view showing unit locations: 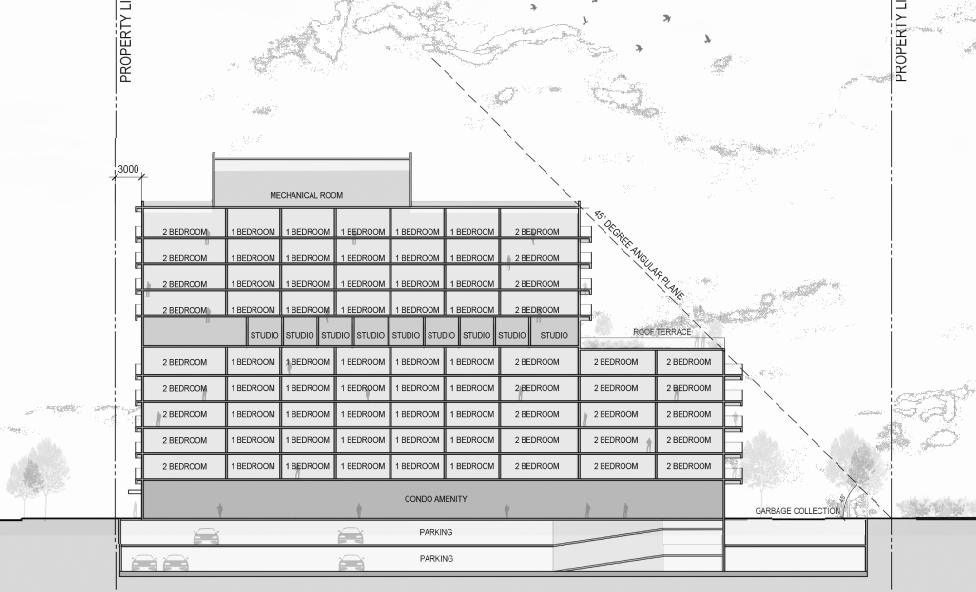 The floor plan for the 6th and 7th floors: 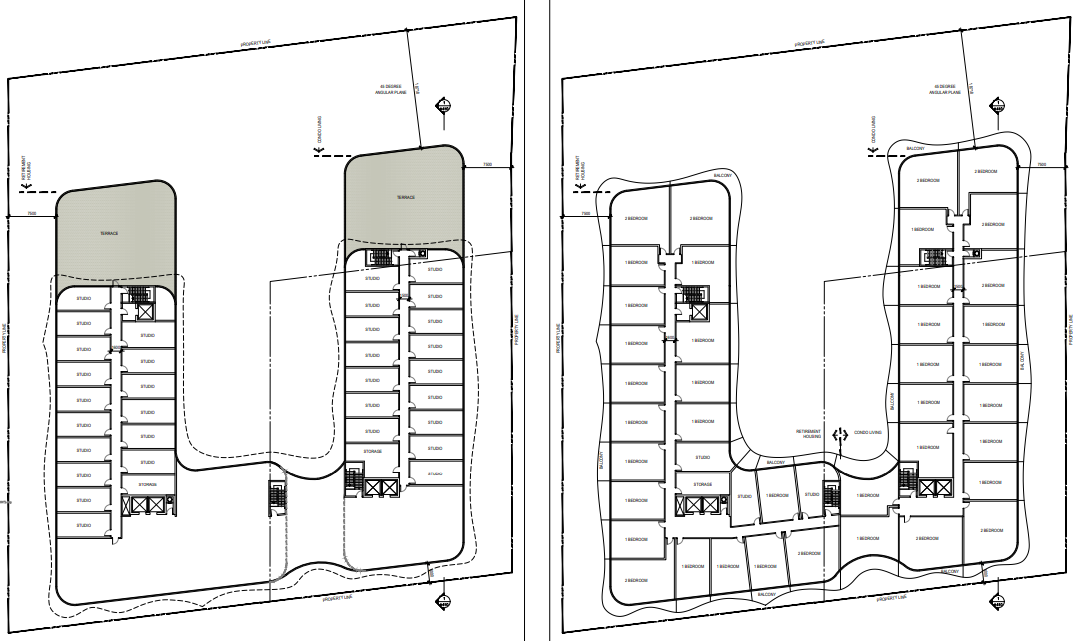 The landscape and site perimeter plan: 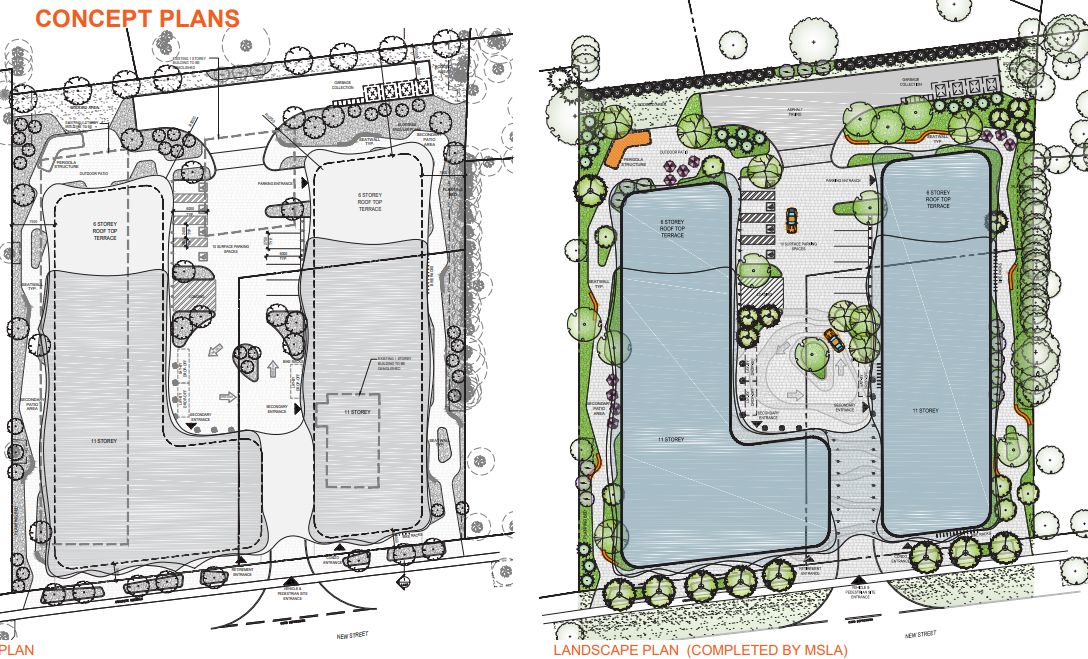 Other documents provided with the application include a shadow study showing which areas would be impacted during a typical day, and a height survey of the property in comparison with adjacent buildings.

But there is another matter that people should pay attention to. An environmental site screening questionnaire was quite noticeably interesting in that the applicant answered ‘uncertain’ as to whether the site is contaminated.

The reason for such answers on the survey can be found under the two Environmental Assessments that were done on the site, in Phase 1 and Phase 2. Phase 1 concluded that concentrations of tetrachloroethylene (PCE) in the groundwater were above the Ministry of Environment’s current levels, which originated from a dry cleaning facility in the neighbouring property. Another property at 466 Guelph Line was listed as a generator of halogenated solvents.

In the Phase 2 EA, boreholes were completed to extract soil samples, as well as monitoring wells to investigate the environmental concerns identified in Phase 1; those samples were then sent to laboratory analysis. Based on the results, the Phase 2 report concludes that the soil concentration of PCE in one sample was found to exceed the applicable Ministry standards, as well as the groundwater concentrations in other samples as well.

The report concludes that “it is apparent that there may be wide-spread contamination of volatile organic compounds (VOC) at the property and that the source of this contamination may be from offsite activity.”

Now, this could be just routine environmental matters that can be cleaned up and once again reassessed afterwards, but it would be best to hear from professionals to get a correct answer. A neighbourhood meeting has been scheduled for May 16 from 7 p.m. to 9 p.m. at the Burlington Seniors Centre in the Port Nelson/Wellington Room.

This is the obligatory meeting before the applicant takes their proposal before Burlington’s Planning Committee.

So if you have strong opinions on this latest development, it would be wise to attend the meeting.