How Many Storeys Should This Downtown Burlington Condo Have?

Burlington’s downtown has been designated as one of the major planning growth areas by the Ontario government. As such, it is not immune to the debate over what kind of buildings are “appropriate” in fitting with the character of the area in question. One of the more recently discussed developments regarding that growth is this high rise condominium that is being proposed across the street from Burlington City Hall.

This development from 421 Brant Street Inc. was deliberated over by Burlington city councillors last week. You can review the minutes, other documents and watch the entire meeting here.

There were some changes from the initial proposal from the applicant when it was presented back in May, which are the following:

Staff also included the comparisons between 23 storeys and 12 storeys currently allowed under the Burlington Official Plan: 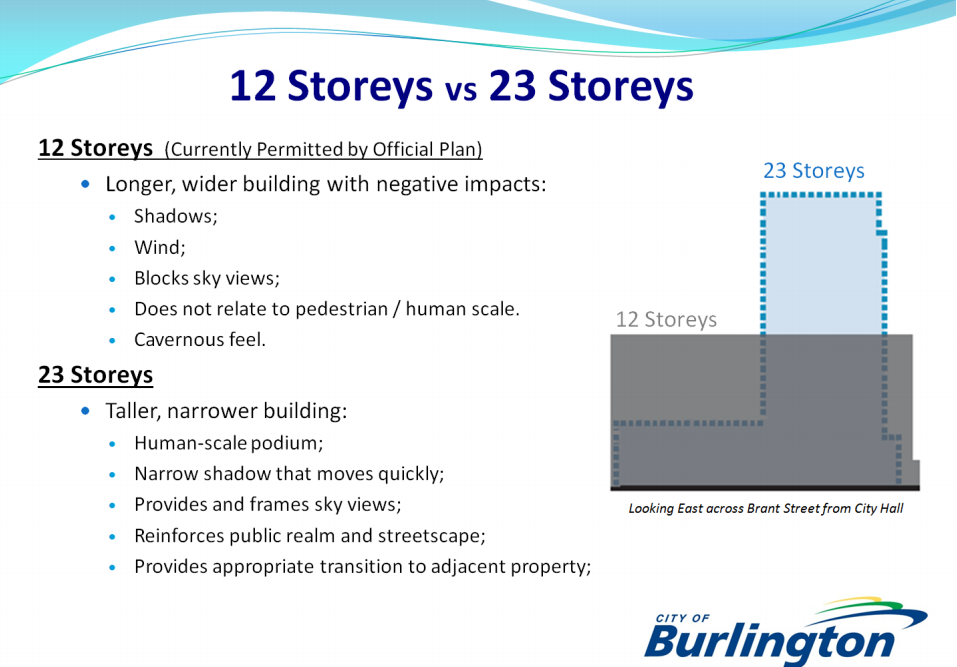 The staff report also presented what they described as the benefits of a modified proposal: 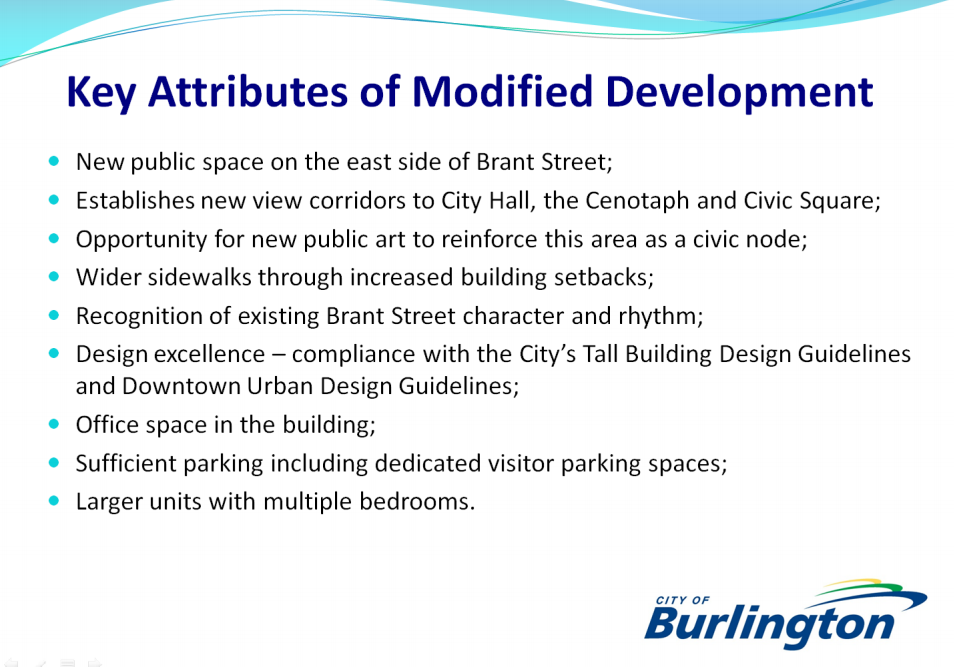 The applicant’s own report compared the original proposed height and the revised version, noting that to them there was not much shadow difference: 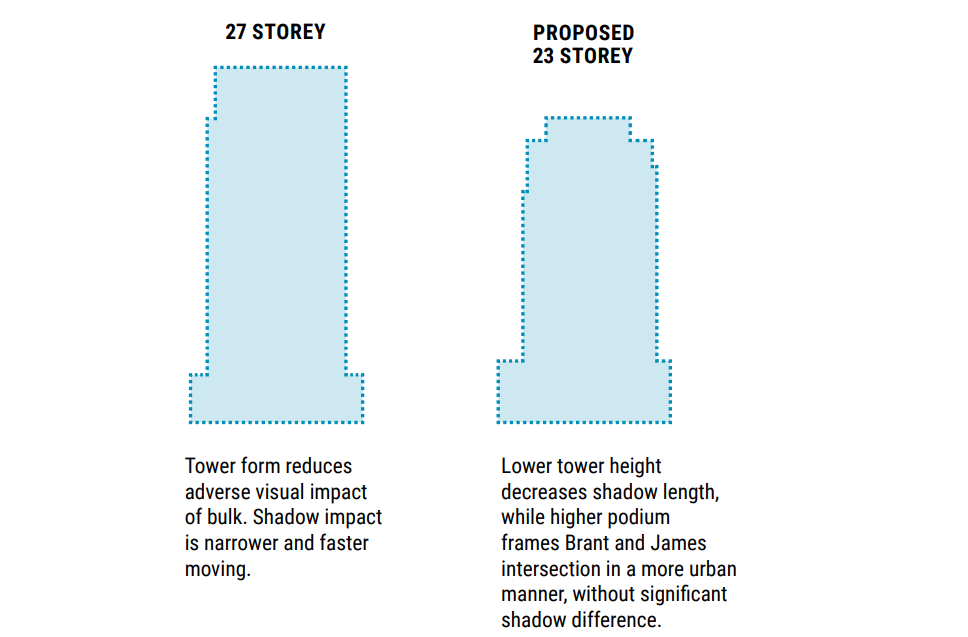 The staff report recommended amending the zoning by-law to accommodate this development. But some residents want to keep the current zoning requirements, launching an online petition to keep the current by-law allowing 12 storeys. As of this writing, the petition has so far garnered almost 800 signatures.

During the meeting there were a number of comments submitted to Kyle Plas, the city planner for this project, and Ward 2 Councillor Marianne Meed Ward from Burlington residents. “This sets a bad precedent,” said Steve Chen in an email to Plas. “The way things seem to work is that approval of one 27 story building will quickly lead to proposals for more of the same height. And, sooner or later, some genius will propose a Toronto-style tower of 50 stories and, voila, a high-rise jungle.”

Bill and Sue Cunningham expressed concerned at the lack of visitor parking proposed and feel this would exacerbate the parking problems already existing in the downtown. While being impressed by the overall design, the Cunninghams believe 27 storeys is far too high, and would make the building stick out like a sore thumb.

Phyllis Mair said the prominent focal point of downtown Burlington should be Burlington City Hall itself (an impressive structure it its own right) and not a 27 storey building. Mair suggested that, first and foremost, considerations should be made to enhancing City Hall to stand out above the rest of the street.

Meed Ward echoed the sentiments that this sets a bad precedent, making the observation that developers simply saw other “tall buildings” in the vicinity and decided another one was fine. But another councillor, Ward 1’s Rick Craven, said a changing skyline was inevitable.

“The future is in tall buildings. We’ll regulate them, we’ll direct them towards the proper precincts, we’ll do the very best we can, but it’s not going to satisfy everybody. We need to embrace the benefits of tall buildings,” Craven concluded.

Mayor Goldring said more people were looking for that downtown, walkable lifestyle, especially millennials, in a suburban setting. But the mayor offered a compromise, suggesting 17 storeys as a better suited way in protecting the core of Brant Street. Nevertheless, the other councillors voiced their support for the proposed 23 storeys, with some saying it was a difficult decision for them.

The vote was 5 to 2 for these recommendations to be sent to Council for the final approval, with Mayor Rick Goldring and Meed Ward being the lone dissenters. The ward councillor did her job to the extent that she was expected to, but the interesting political dynamics is that the condo is moving ahead with votes from councillors outside the downtown. Downtown Burlington residents can’t realistically vote them out, unless there were constituents from those other wards who are concerned about the changing Burlington skyline.

The final approval vote will take place the November 13 council meeting at 6:30 pm.