How Cannabis Will Affect Housing in Halton

While cannabis has been legal throughout Canada since Oct. 17, it’s not yet clear what kind of affect the newly legalized substance will have on the country’s real estate and rental market.

As you no doubt recall, Bill C-45–the Cannabis Act–allows Canadians to purchase, consume and grow limited amounts of cannabis from a provincially-regulated retailer (as of now, that’s the Ontario Cannabis Store, which is an e-commerce platform).

But while consumers are generally happy with legalization (hiccups with orders and delivery notwithstanding), real estate website Zoocasa says the new law could impact the housing market.

“That’s because, despite the drug’s newly-minted legal status, questions linger over how personal use and cultivation may impact the value, desirability, and even the insurable status of homes for sale.”

As of now, stigma pervades among current and prospective homeowners, as well as those renting out their property.

According to a new national survey conducted by Zoocasa that polled over 1,300 Canadians, sentiments remain largely negative regarding the following issues:

According to the survey data, most Canadians feel that smoking cannabis inside their homes is a generally bad idea. A full 64 per cent of those who indicated they were homeowners felt doing so would harm its resale value, an increase from the 39 per cent who indicated as such in Zoocasa’s previous Housing Trends Report.

Zoocasa says that 57 per cent of homeowners  felt that growing even the legal amount of cannabis (up to four plants), would have a negative impact on a home’s value.

This stigma extends to prospective home buyers, too: A total of 52% respondents say they’d be less likely to consider specific houses for sale if they knew even a legal amount of cannabis had been grown in them,” Zoocasa says.

Homeowners are also worried about cannabis dispensaries moving into their neighbourhoods.

Zoocasa’s findings reveal that 42 per cent respondents feel having a cannabis dispensary in the neighbourhood would harm the value of nearby homes.

A whopping 48 per cent of respondents stated the presence of a dispensary nearby would reduce their desire to purchase a specific property.

Only 14 per cent of all respondents said they would feel uncomfortable with a new liquor store opening in their neighbourhood. 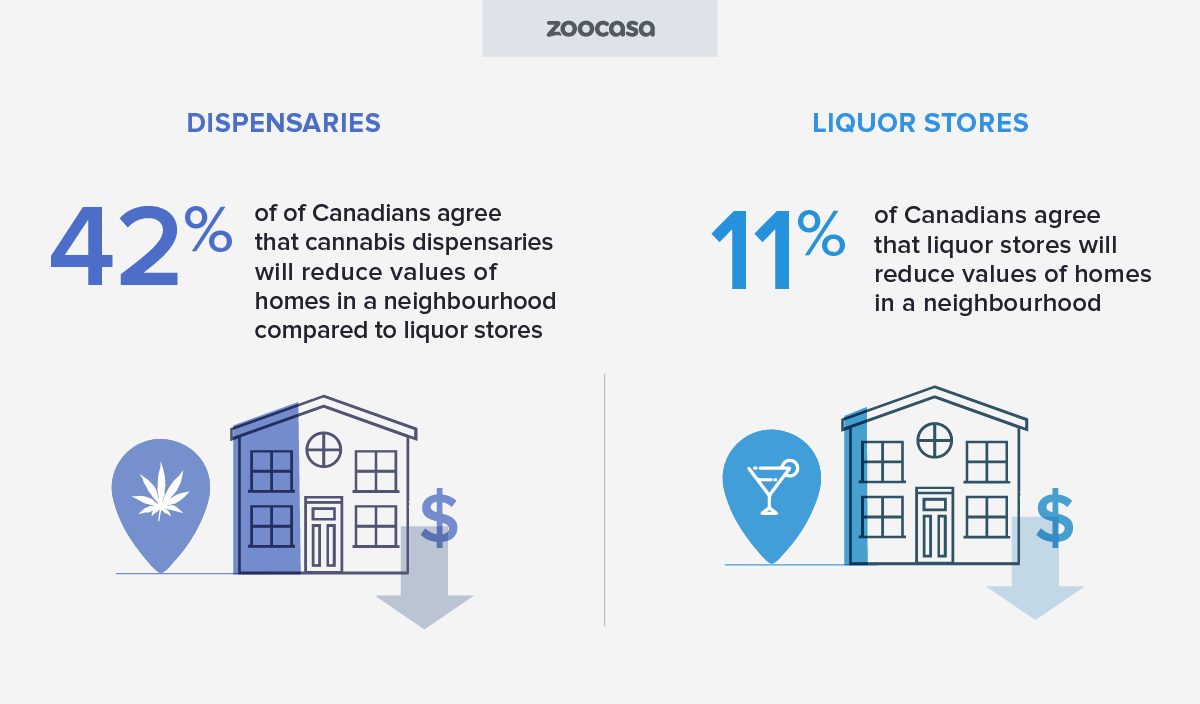 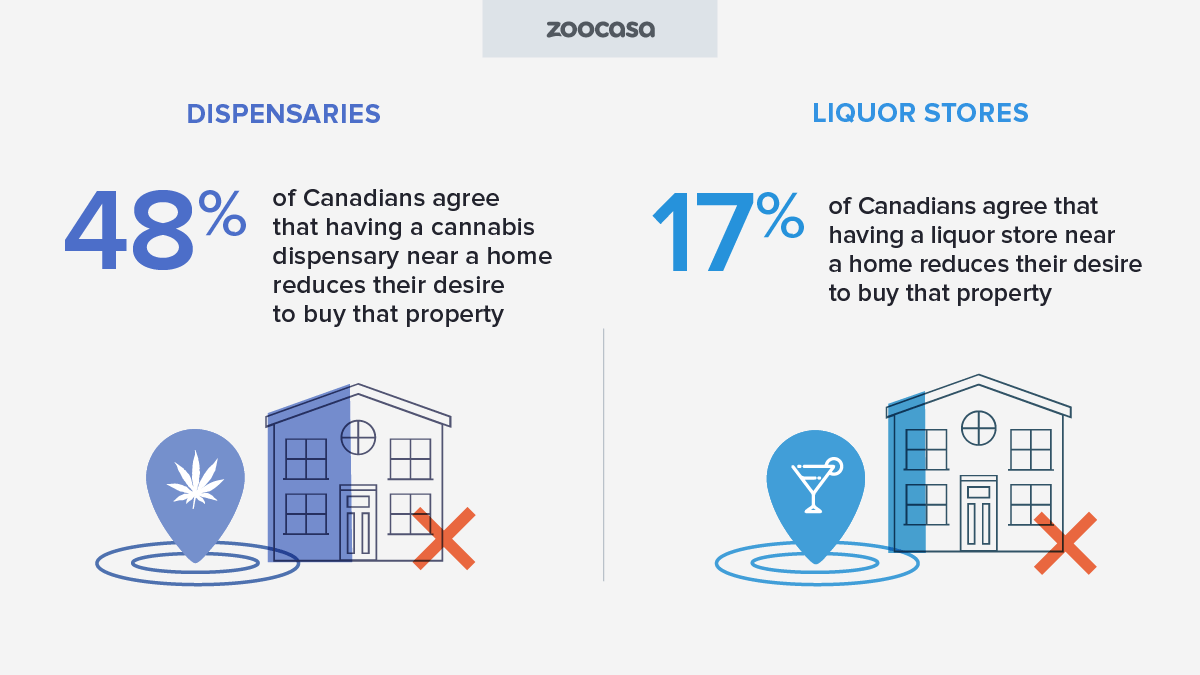 Cannabis is especially complex for those who live in high-rise condos and apartments.

“One of the most hotly debated pre-legalization topics is whether those who live in close proximity to their neighbours – such as condo unit owners and renters – should have the same ability to consume cannabis as those who live in detached homes, as condo boards and rental management have fought to control or ban use prior to legalization,” says Graham.

Zoocasa says that according to the data, the majority of Canadians aren’t in favour of condo or apartment consumption, with 61 per cent of all respondents saying that residents should not be able to smoke cannabis within their units, and 64 per cent believing boards and property managers should be able to ban the drug’s use in residents’ units.

Renters are a little unclear on how the rules will work for them.

In comparison, Zoocasa says 67 per cent of landlords agreed they understand their rights regarding what can and can’t be enforced when it comes to tenants smoking or cultivating the drug on their property. Interestingly, 65 per cent of landlords say they would consider lowering rent for tenants who do not smoke cannabis.