The municipal election campaign across Halton Region has now taken off after the Labour Day long weekend and a lot of activity has taken place.

Although the mayor’s elections in Milton, Oakville and Burlington are all being contested, not many are expecting a change at the top of those municipalities. Milton Mayor Gord Krantz and Oakville Mayor Rob Burton are expected to win another term, and even though he faces two high profile opponents, it is still Burlington Mayor Rick Goldring’s race to lose.

But there are interesting bits of news happening with various other candidates across Halton:

Burton is facing restaurant entrepreneur Julia Hanna and local lawyer John McLaughlin in his reelection bid, but it appears he is ducking chances to debate them.

Cogeco TV’s “The Issue”, a local public affairs program, announced they are cancelling a scheduled mayoral debate because Burton declined the invitation to participate, which didn’t sit well with both his opponents.

“The Issue had tried to assemble all candidates for Oakville mayor. Unfortunately, we have not been successful,” Mark Carr from Cogeco TV announced in a statement.

“Debates are an important part of the democratic process. Residents need to hear where we stand on the issues!,” Hanna said in her tweet, but McLaughlin criticized both of them for demonstrating poor leadership.

I will appear with Julia (and Burton), anywhere, anytime any topic. Julia made a leadership "blunder", in ignoring my debate participation and implying Rob Burton "ducked" her. Julia owes Rob Burton a fair chance to respond, that's bad leadership on her part on both counts!

It’s very strange that the network would not just have the remaining two other candidates debate; if you have two people willing to debate then at least you are giving residents in Oakville some options.

But that is one of the disadvantages of local media’s relationship with local politicians in smaller communities: this instinctive reaction to how they cover an election based on an incumbent’s decisions.

It can make it look–perhaps unintentionally– that the outlet is siding with the current officeholder.

Meanwhile, there are other opportunities to meet candidates 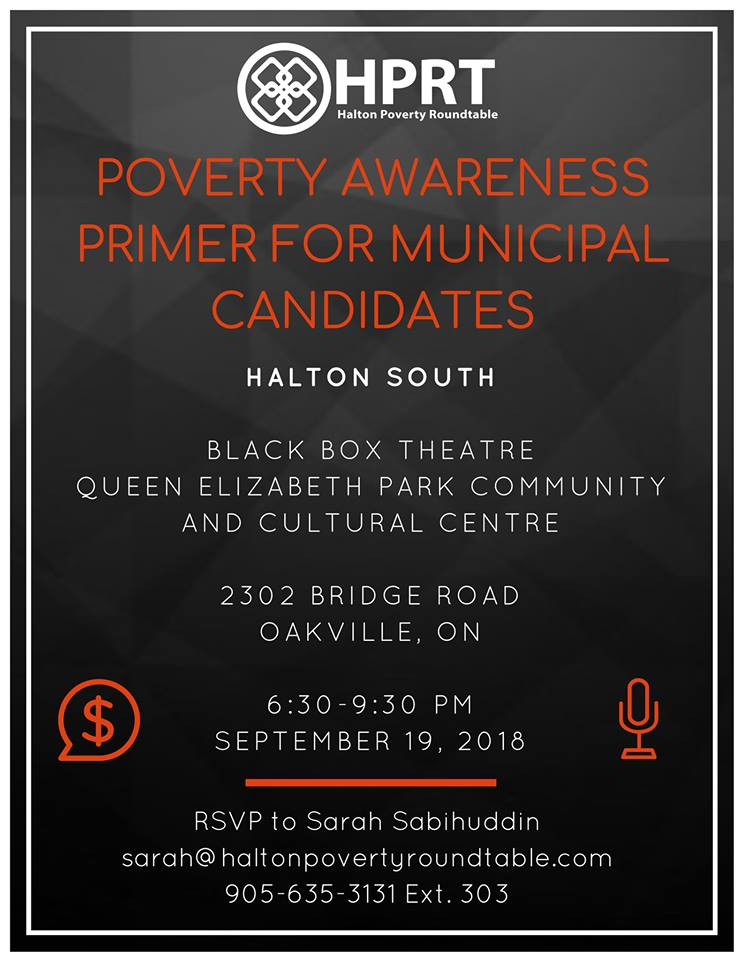 And the other takes place a week later on September 26. 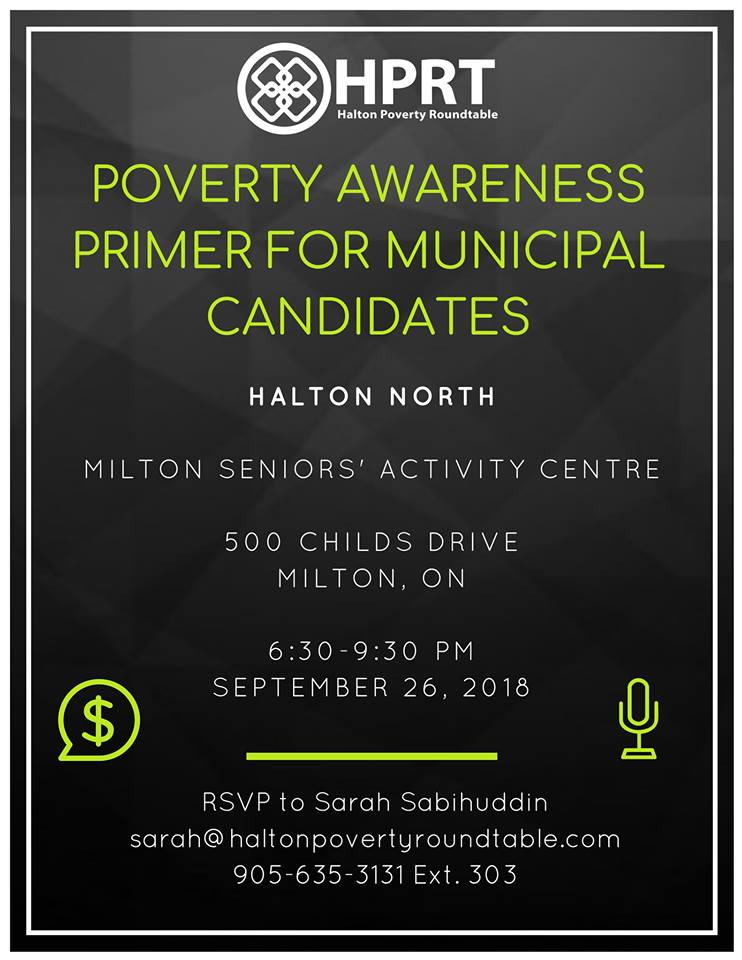 The purpose of both sessions is for office seekers to “learn from community change makers and nonprofit leaders on what poverty looks like in our community. Additionally, we will be discussing what important work is being done to assist those living the experience of poverty in our neighborhoods.”

Town councillor Zeeshan Hamid, who is running for regional councillor in Milton’s new Ward 4, recently took to Twitter to express his opposition to expanding the current Milton GO station with one of those massive parking structures.

We don't need a GO parking structure in Milton GO (Main & Thompson), that'll bring traffic to a complete stop. What we need is two new GO stations (Tremaine and Trafalgar) to take the load off and distribute traffic.

Plans to expand the current Milton GO station were announced back in February by the former Liberal government to include things such as the new station building; an upgraded parking lot with additional 850 parking spaces, reconfiguring parking lot layouts, bus loop, passenger pick-up/drop-offs and accessible connections to train and bus platforms.

Speaking to Hamid at a recent event, he said that by expanding that one GO train station, you’re eventually going to create a traffic nightmare as commuters ‘attempt’ to get out of the new parking lot, which would be virtually impossible. “You have commuters coming in as far as Cambridge taking the Milton line for access to downtown Toronto; that coupling with new developments nearby would make things even more congested.”

“What we need is two new GO stations, preferably on Tremaine and Trafalgar, to take the load off and distribute traffic,” Hamid continued, saying that redistributing the services would make it better for commuters who actually want to get home on time.

Now there appears to be a bit of contention over what constitutes as a proper donation under the Municipal Elections Act, as Williams sent a press release to media outlets a few weeks ago alleging Nisan’s campaign may be violating election financing rules.

“On September 9, Nisan held an event advertised as a “Community BBQ,” at which his campaign sold tickets for a raffle lottery with the proceeds going to his campaign. According to several of Nisan’s own social media posts, the sum total of prizes were valued over $900, and he also mentioned some prizes were donated by local businesses,” the press release reads.

Williams refers to some examples of what appear to be donations from businesses to Nisan’s campaign. Under the Elections Act, corporations and unions are forbidden from donating to candidates in municipal elections. 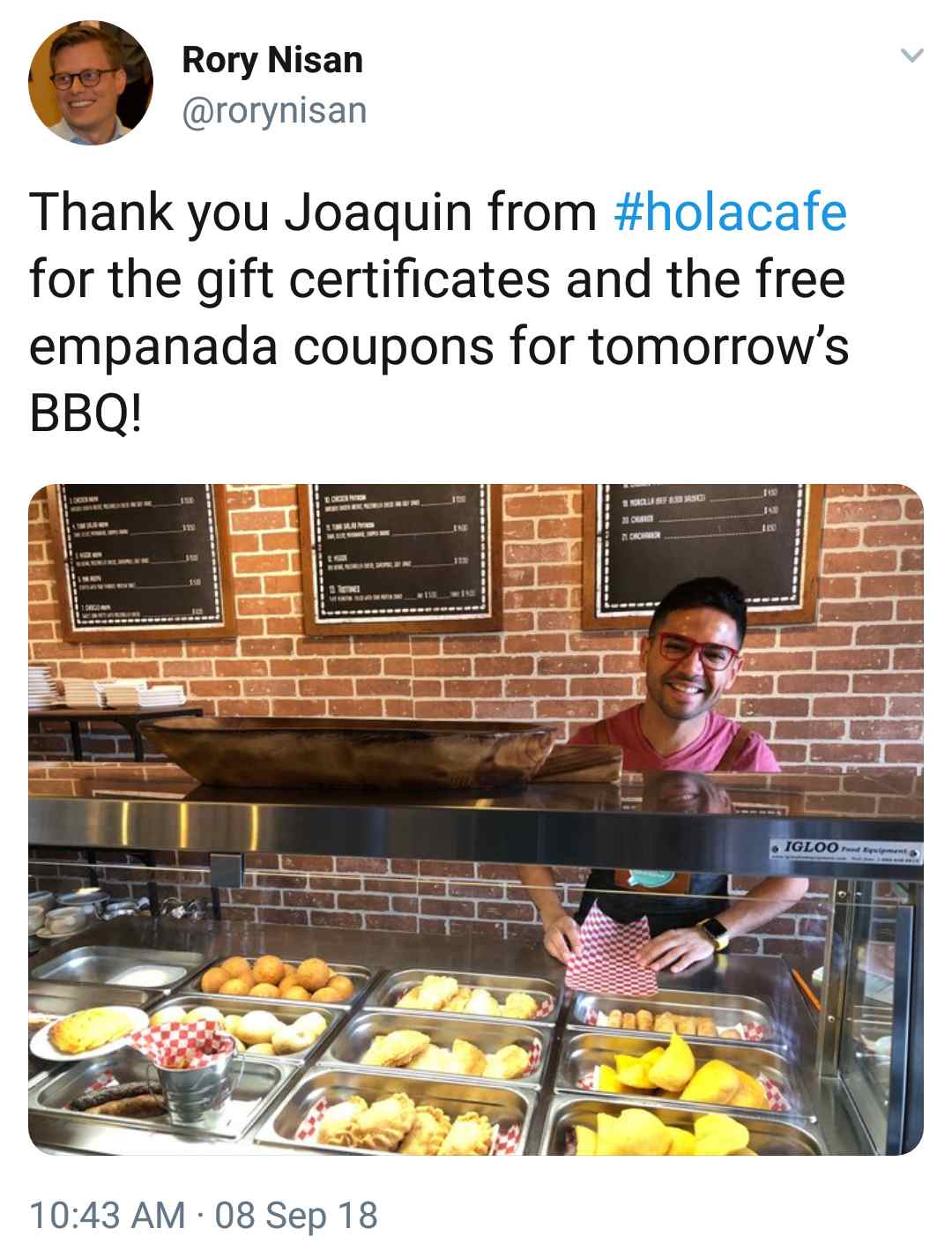 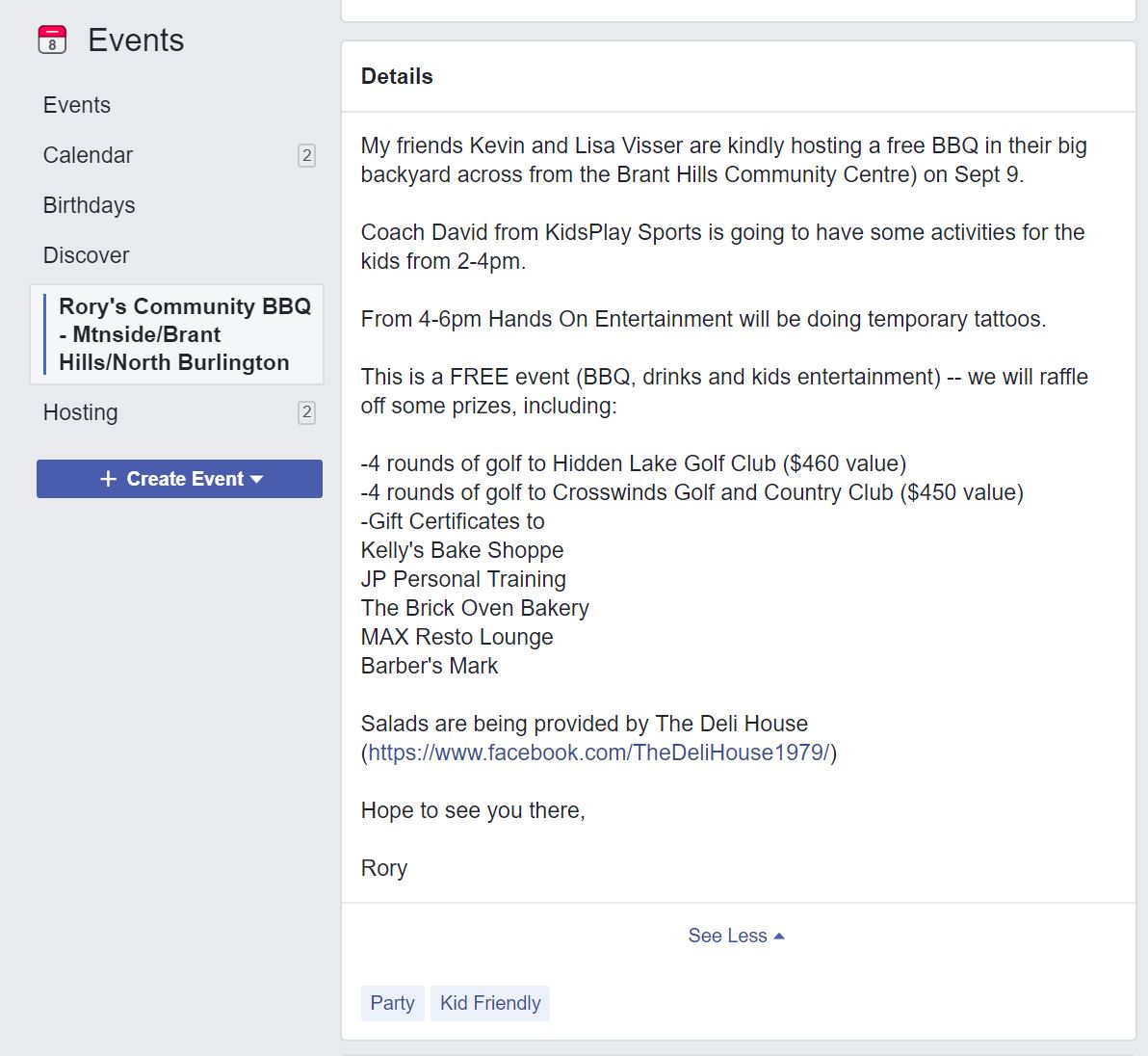 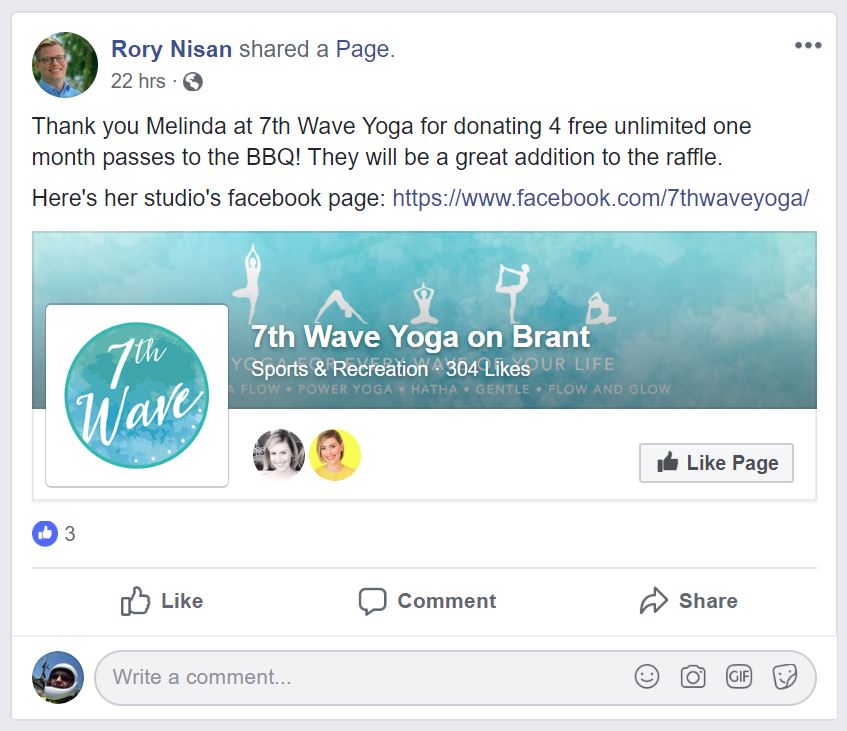 “Only personal contributions from Ontario residents. Nisan posted multiple times to social media thanking businesses for their donations to his community BBQ raffle. Based on these posts, it seems that Mr. Nisan may have accepted corporate donations.”

“Furthermore, according to testimony from witnesses, event organizers offered raffle tickets for selected prizes as an inducement for attendees agreeing to take a campaign lawn sign,” Williams continued, saying candidates have the responsibility to inform themselves of and follow the rules that govern election campaigns, and  Nisan appears to have either not learned the rules, or opted not to abide by them.

In response, Nisan issued this statement to inhalton.com:

“I was made aware by the City of Burlington on Monday afternoon that there could be an issue with the raffle held at a community barbecue I hosted on Sunday, Sept 9.”

“It quickly became clear to me that I had made a mistake by holding a raffle without a permit.  I regret this error.”

“I have reached out to the City to find out how best to rectify the situation. I have also voluntarily cancelled the raffle and have already returned almost all contributions and am in the process of contacting the raffle participants to provide refunds.”

“As far as corporate donations are concerned, the 2018 Candidates Guide for Ontario Municipal Council and School Board Elections states that vendors may make personal contributions of goods and services, and returning an ineligible contribution is the correct response. After discussing with the city and the province, I am convinced that there is no corporate donation being made to my campaign.” 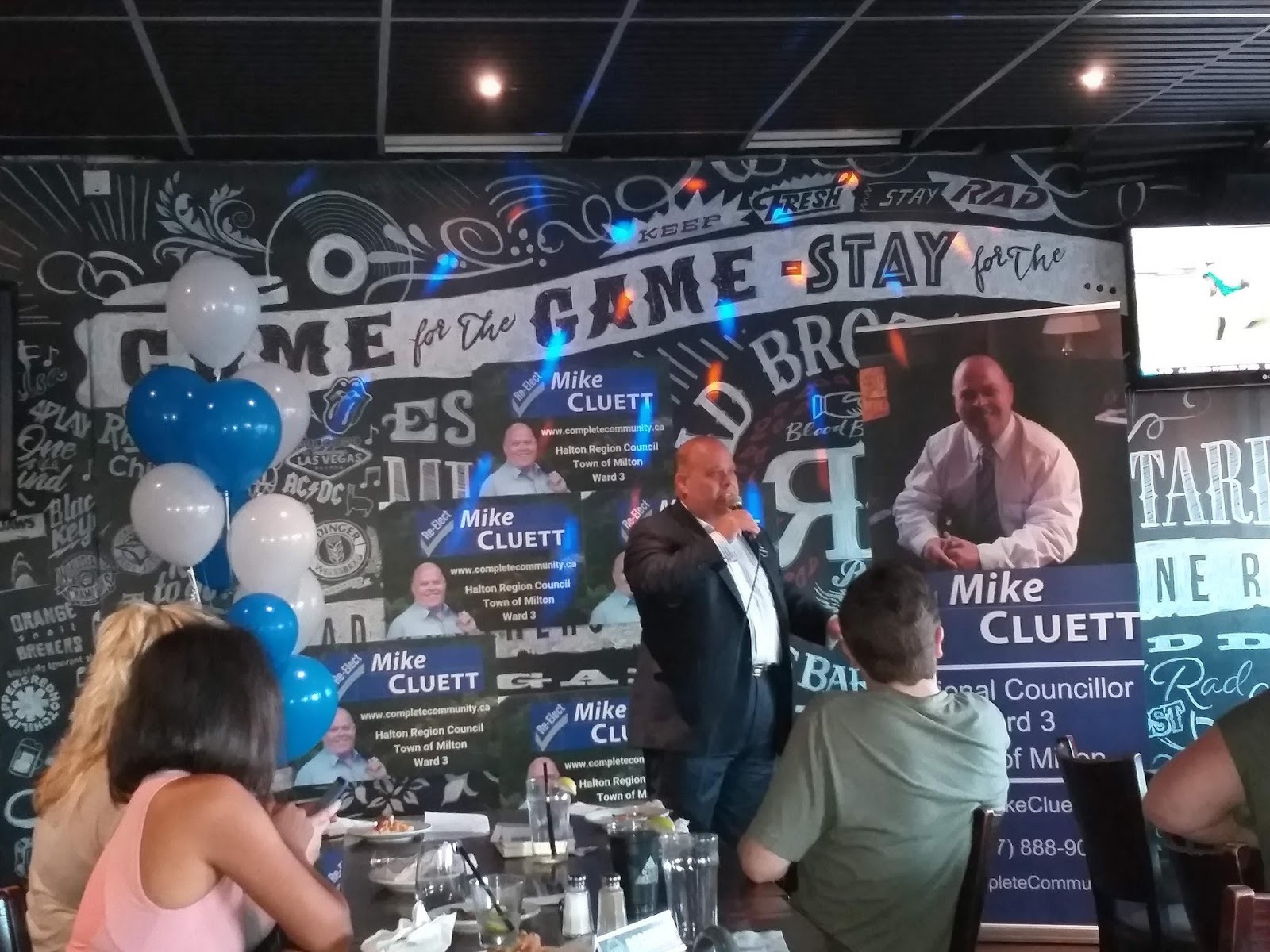 “We have to elect the right, experienced people if we want to continue with things like the new university, expanding the GO station, all day two way train service, the new hospital and fighting the CN Intermodal proposal,” Cluett said, who was also joined by former professional wrestler Tiger Ali Singh, who gave the councillor his wholehearted endorsement. 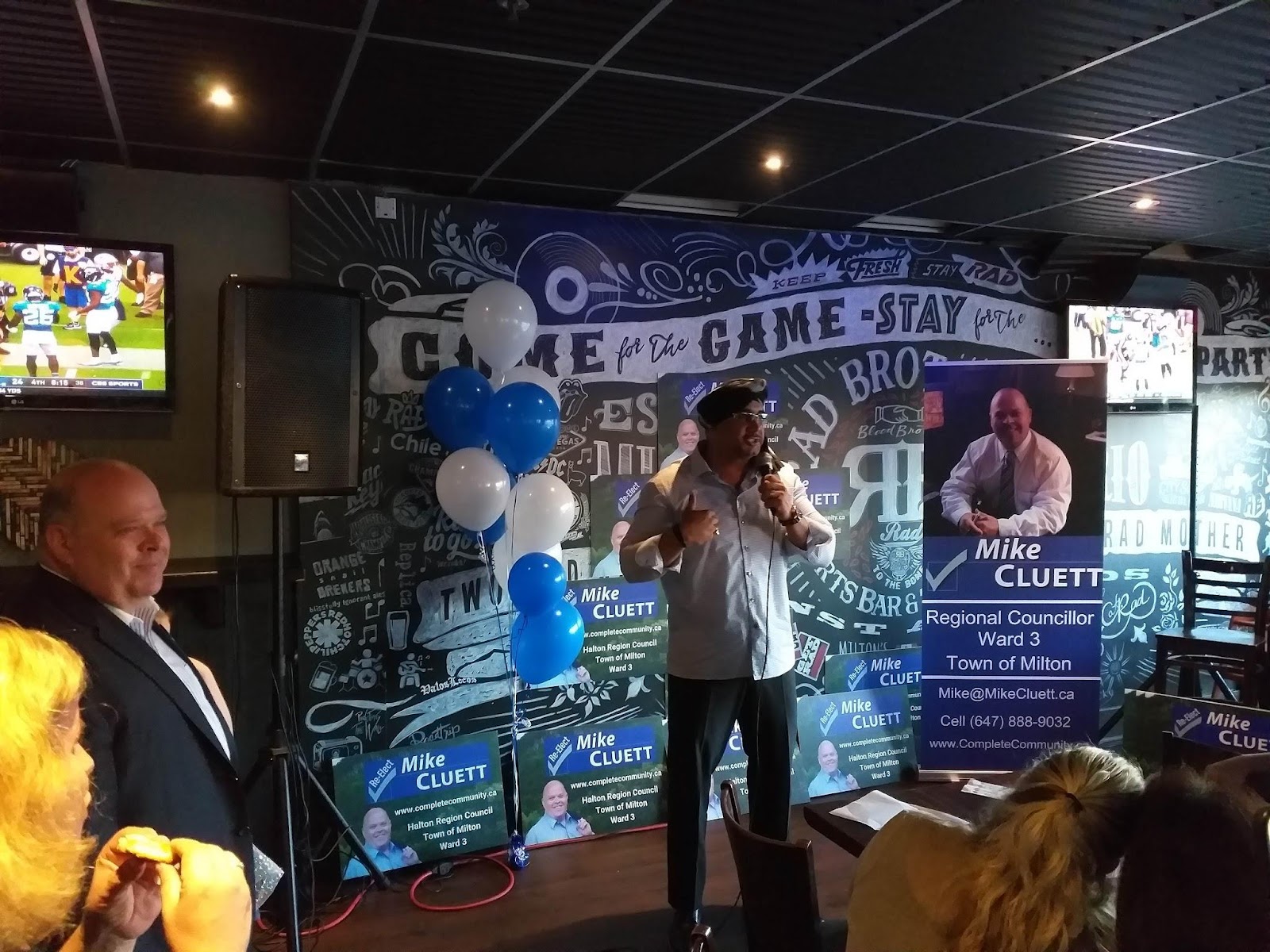 Singh said he would be happy to endorse Cluett no matter what he was running for, even (jokingly) Halton Regional Chair. The current chair, Gary Carr, is seeking another four year term on October 22.

Some more ‘shade’ continues to be thrown at Oakville’s Mayor Burton, as his other challenger John McLaughlin tweeted out how one federal MP was willing to meet with him to discuss issues with him, while the other one was not.

@PamDamoff discussed pensions, taxes & jobs with me, but John Oliver wouldn't. @JohnOliverMP is the Oakville MP in Parliament – to represent residents & address their needs. John even signed Rob Burton's election nomination! But he won't discuss Oakville's concerns. Oh my! https://t.co/3gwlMfTOcE

“While Pam Damoff discussed pensions, taxes and jobs with me, John Oliver wouldn’t meet with me. Oliver is the Oakville MP in Parliament – to represent residents & address their needs.  John even signed Rob Burton’s election nomination! But he won’t discuss Oakville’s concerns. Oh my!,” tweeted McLaughlin.

The election takes place in approximately one month on October 22.