Catholic Board to vote tonight on flying Pride flag at Oakville, Burlington and Milton schools

Although it is a relatively minor issue with most of the population, the topic of regional government and its future is one of the major files the Ontario government is currently dealing with, and now there is recent movement on that file.

The government announced that they are seeking online feedback from the public for their review on regional government in Ontario, specifically for Peel, Durham, York, Halton, Niagara and Waterloo Regions as well as Muskoka District and Simcoe County.

After Doug Ford cancelled a number of local elections for regional chair during last fall’s municipal election, the premier announced that they would start a consultation process on the future of these regions, bringing in former Waterloo regional chair Ken Seiling and deputy minister Michael Fenn as ‘special advisors’ overseeing the review.

“We promised the people of Ontario that all levels of government would work harder, smarter and more efficiently,” said Municipal Affairs and Housing Minister Steve Clark. “Our government is putting people first by seeking local input on how to improve governance, decision-making and service delivery for regional governments and their member municipalities.”

Fenn and Seiling will then assess the feedback received, provide their advice and recommendations to Clark this summer, with the government’s official decision revealed by the fall of 2019.

As a resident of one of those regions under review (Peel), I took it upon myself to do the online consultation. You can also provide your comments in writing and mail them back to Queen’s Park should you choose that method of communication.

Here’s what you would be expecting should you choose to partake. First you would be asked which region you reside in and to answer some general questions: 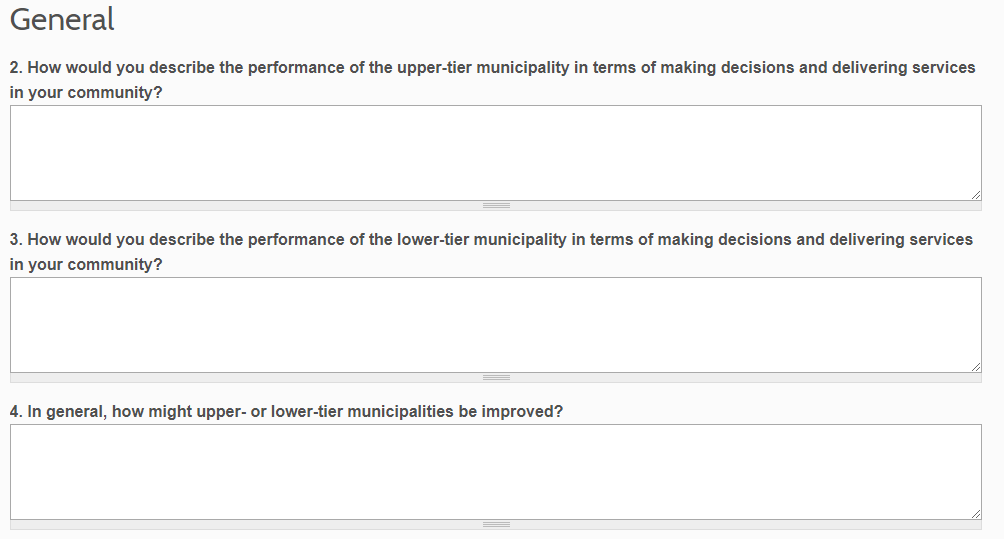 You are then asked to provide your views on governance in your respective regions.

The final section focuses on asking feedback on service delivery. 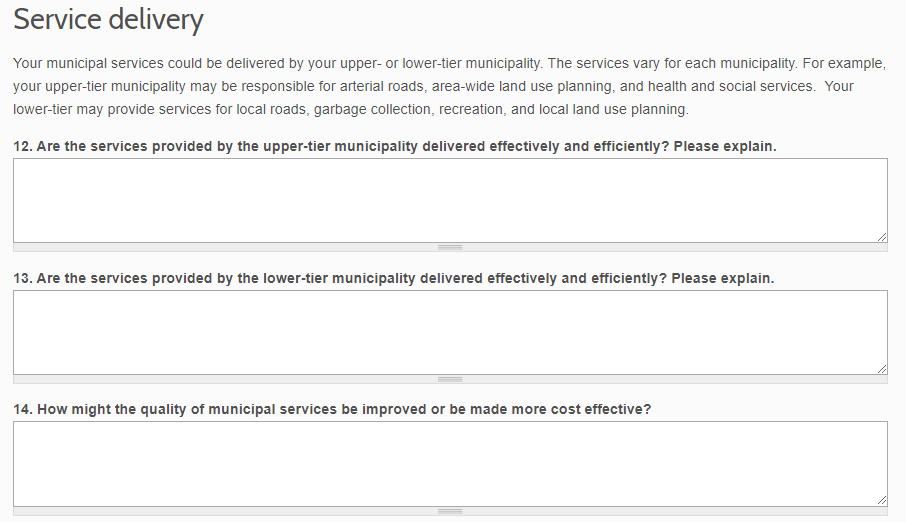 Before submitting your answers, you are asked to tell something about yourself and to confirm which regional municipality and city/town you reside in. 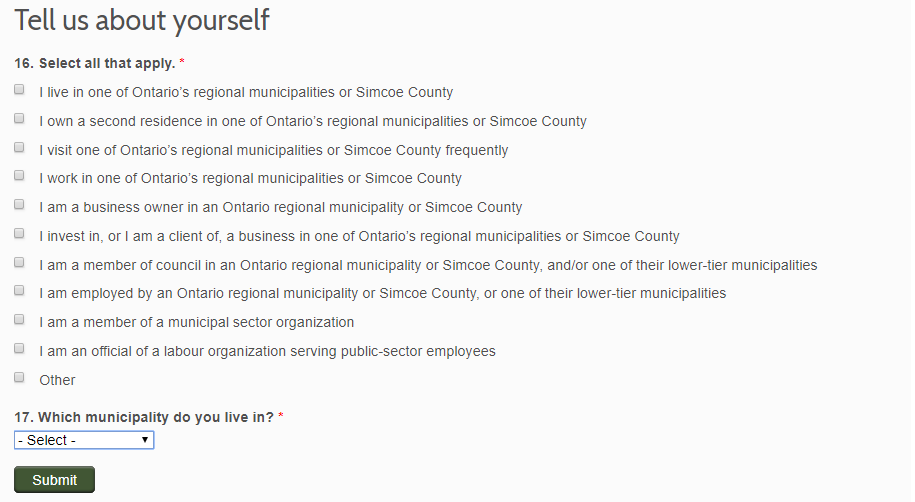 However, even though there is technically a ‘public consultation’, some were not convinced that the online survey asked the right questions, or was too restrictive to just talking about delivery of services and not about anything else related to regional government.

It is interesting that the survey has no likert scales, just open text boxes. The questions are repetitive as well.

The last time the topic of regional government was examined, echoes of amalgamation were floating around as people raised the prospect that the Ford government would just go for broke and create ‘mega cities’ and just turn the four regional governments around Toronto into four giant cities.

Mississauga residents may be advocating for the city to uncouple itself from Peel, while residents in Brampton and Caledon may be less enthusiastic on that notion. If you’re in Halton Region, perhaps the collective view is that things are working out just fine and “if it ain’t broke, then don’t fix it” is the order of the day.

The deadline for the public to submit their comments is April 23.

Will you be participating in Ontario’s regional government review?