Burlington road to be closed next week for watermain work

This past Tuesday the Ontario Legislature reconvened for their first session for 2019, as MPPs returned to Queen’s Park. However, the members of the Legislature were not alone as they were greeted by hundreds of students protesting in the legislative chamber.

Doug Ford’s government recently announced changes to OSAP funding, effectively ending ‘free tuition’ for students as well as a slew of other changes in the post secondary file. Back in the house, the premier faced questions over this issue.

In 2017, the previous Liberal government announced students from families with a combined income up to $175,000 would benefit from more generous grants and loans to assist with college and university expenses. This meant that more than one-third of all full-time college and university students in Ontario would receive free tuition.

The Conservatives recently said they were changing OSAP so the program would focus on lower-income earners, adding that the changes will ensure 82 per cent of grants will go to students with a family income of less than $50,000. Critics have lambasted the government for shifting the program from being grants to loans, which they said would put additional burden on students.

During Question Period, things got especially heated when Ford was questioned over OSAP changes by NDP leader Andrea Horwath, who implored Ford to reverse his decision and not ‘attack students,’ as those very students shouted at the premier from the gallery.

“Speaker, it’s true that student organizations do a lot of good work and provide a lot of valuable supports for students, providing health care plans and all kinds of other support programs for kids who are in crisis on campus. Some former student union leaders, in fact, are sitting in the PC benches right now,” Horwath said (Tory MPP Stephen Lecce is a former vice president of the Western University students union).

“Will the Premier call off his attack on the democratically elected student organizations and support the important work that they do?”

In response, the premier gave an answer that made him sound more like an old schoolteacher attempting to discipline misbehaving children than the guy running the province.

“That’s how they train our kids…with a filthy mouth. They should have their mouths washed out with soap.” yelled Ford in his response to Horwath. The premier also apparently called the students “socialists” as well.

After some student activists shout and get ejected from the public gallery during a question about #OSAP, Premier Doug Ford says “Here’s an example of indoctrination, what we just saw up there.”
Then after sitting down he adds, “They’re gonna be good socialists.” #onpoli pic.twitter.com/sQkvYpI4T8

As with the litany of controversial comments that come out of Ford’s mouth, reactions to his critique of students’ conduct was fast and condemning. Here is former Universities and Colleges Minister under Kathleen Wynne, Deb Matthews:

Watching Question Period at Ontario legislature, and am gobsmacked at the answers from @fordnation and @DrFullertonMPP . Either they do not understand what they have done to #OSAP, or they are outright lying. There is no other explanation. Truly shameful. #onpoli #saveOSAP

This person pointed out the apparent contradiction of the premier’s earlier announcement of a ‘free speech policy’ for post secondary institutions, yet here he is attacking students for being “Marxists”.

Doug Ford: Free Speech policies on ALL universities or get defunded!

Here’s another account of a former student who said he didn’t learn to believe in ‘socialism’. 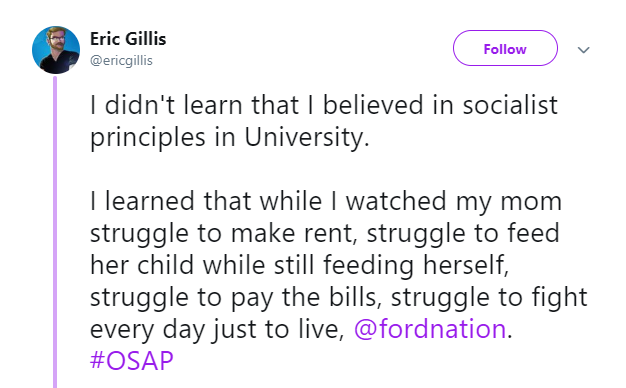 Another observer noted that, while he mistook Ford saying ‘salt water’ instead of ‘soap’, scolded the premier for behaving like a child. 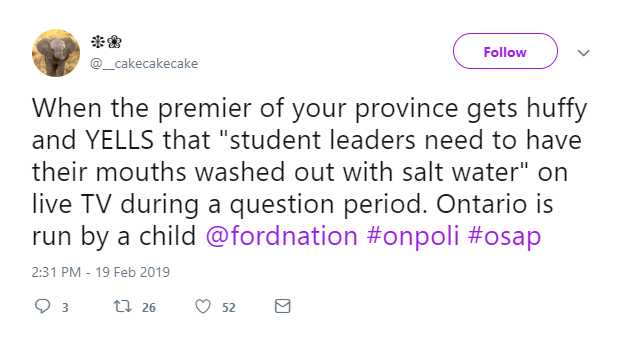 All this rhetoric aside, it’s just a huge contrast to see this coming from Ford, even though people should be familiar with “off the cuff”, bombastic rhetoric coming from this premier. It wasn’t that long ago when the provincial government got praise from students and post secondary education advocates for investments in that sector.

Considering that Ford once had a brother who had his own history with colourful language, it seems hypocritical that Doug Ford wanted to ‘discipline’ these students for engaging in the act of protesting his government’s policies regarding OSAP funding, which they have every right to do.