This may be an issue that gets not only Doug Ford’s PC party base solidly behind him, but most Ontario voters as well.

During last year’s provincial election, one of Ford’s key promises was that he would fire the CEO of Hydro One, Mayo Schmidt, who was being paid $6.2 million in compensation by 2017 under the former Liberal government. Schmidt was dubbed “the $6 million man” by Ford.

Once in office, Ford’s promise somewhat came true, as Schmidt himself announced he would retire but not without leaving with $10.7 million in severance (thanks to stock options), which was far more than the $400,000 Ford said. 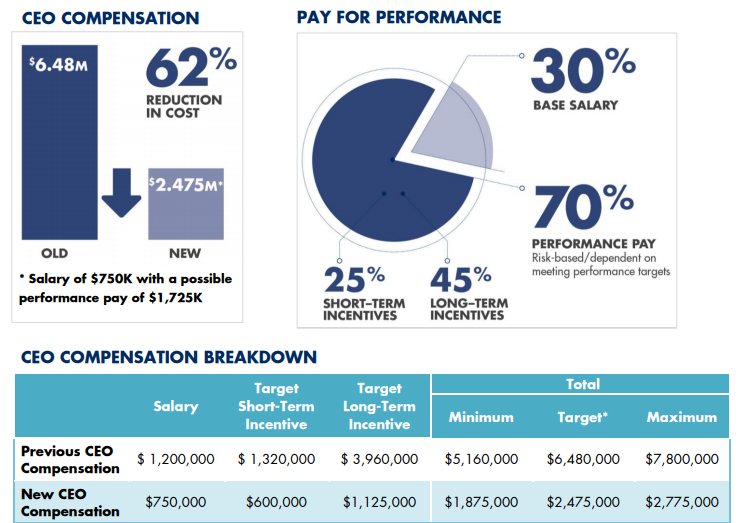 Whereas the previous CEO compensation was up to $6 million, the new framework would see what Hydro One dubbed ‘a 62 per cent reduction in cost’ totalling now $2.5 million, with a cap on compensation up to $2.77 million.

But it seems despite Hydro One’s revised compensation package, the Ford government was not satisfied, instituting their own cap on compensation which they announced in this press release yesterday.

“After receiving a proposal last week that included a CEO compensation cap of $2.775 million, it is clear that Hydro One’s Board of Directors has failed to take steps to adequately reduce compensation for both the CEO and themselves as board members,” said Energy Minister Greg Rickford.

“Under the authority granted through the Hydro One Accountability Act, 2018, the Management Board of Cabinet has issued a directive requiring Hydro One to set a hard cap of $1.5 million per year in total maximum direct compensation for the next CEO of Hydro One.

In addition to the cap on compensation to $1.5 million, the annual salary would now be $500,000, similar to what the CEO of Hydro Quebec is making. It also includes an annual cap of compensation to $80,000 for board members and $120,000 for the board chair.

“These incentives will be tied to measurable performance targets to be developed by Hydro One, including the CEO’s contribution to reductions in transmission and distribution costs that contribute to achieving our commitment to a 12 per cent reduction in electricity bills,” the statement continues.

Hydro One continues to search for a new CEO in the wake of Schmidt’s departure.

For the full copy of the government’s directive to Hydro One regarding compensation, governance as well as other issues, click here.

If you needed further evidence that this is a solid red meat issue for the Tory base, Ford fired off a fundraising email to his party’s supporters as he issued the directive to Hydro One.

Premier Doug Ford fires off a fundraising email, asking supporters to financially back him as he “directs” Hydro One to limit its CEO compensation. #ONpoli pic.twitter.com/haOtsGzBNT

Partisan gamesmanship aside, there may be more to reducing hydro rates and stabilizing Ontario’s electricity system than just dealing with how much the people in charge get paid every year.

What do you think of Doug Ford’s move to cap the salary and compensation package for Hydro One’s executive and board members?