It should be no surprise that the issue of development in Burlington took centre stage recently at a mayoral candidates debate held at Burlington Central High School.

The event was hosted by Engaged Citizens of Burlington and the room was packed with residents waiting to hear from the four people running for mayor. 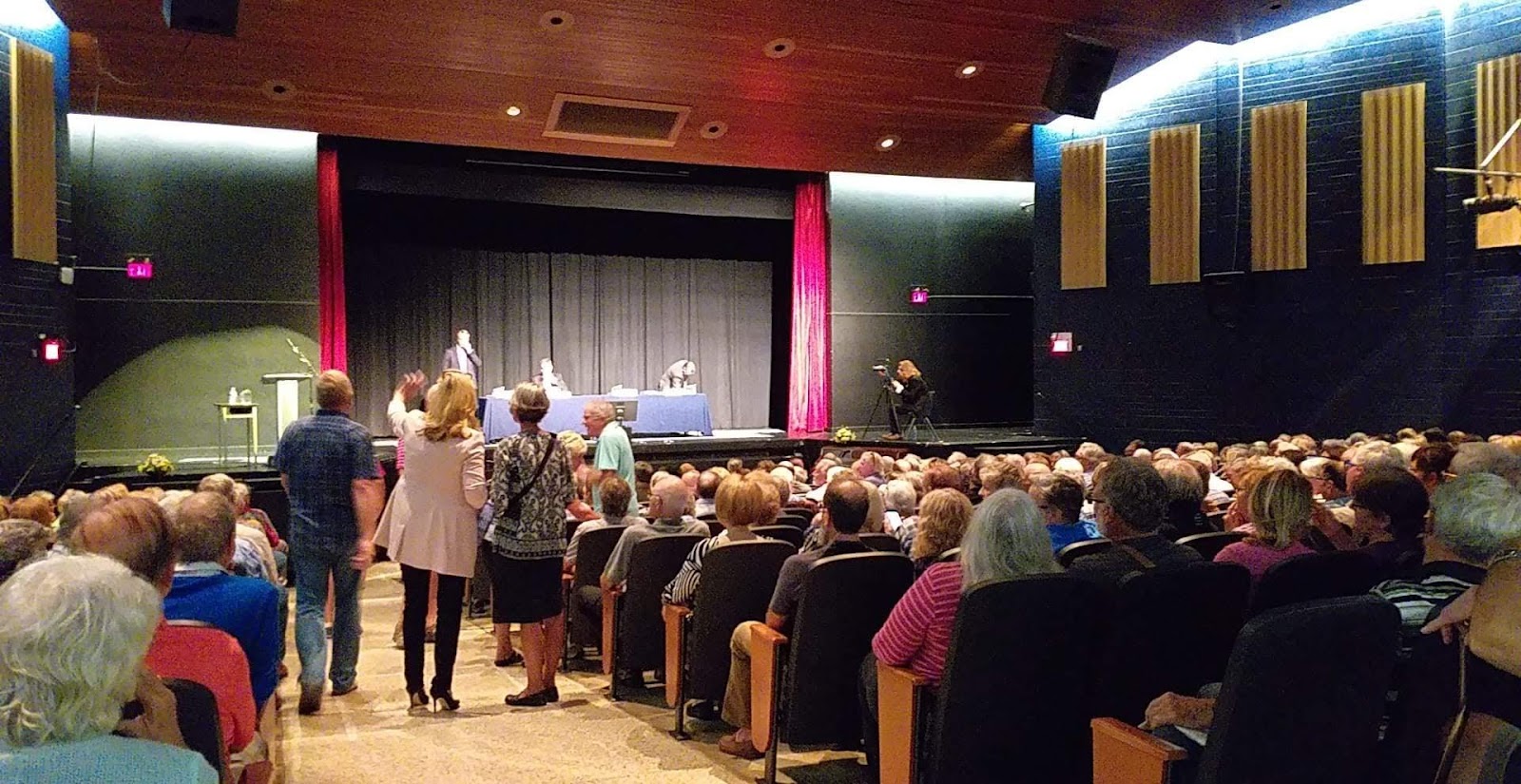 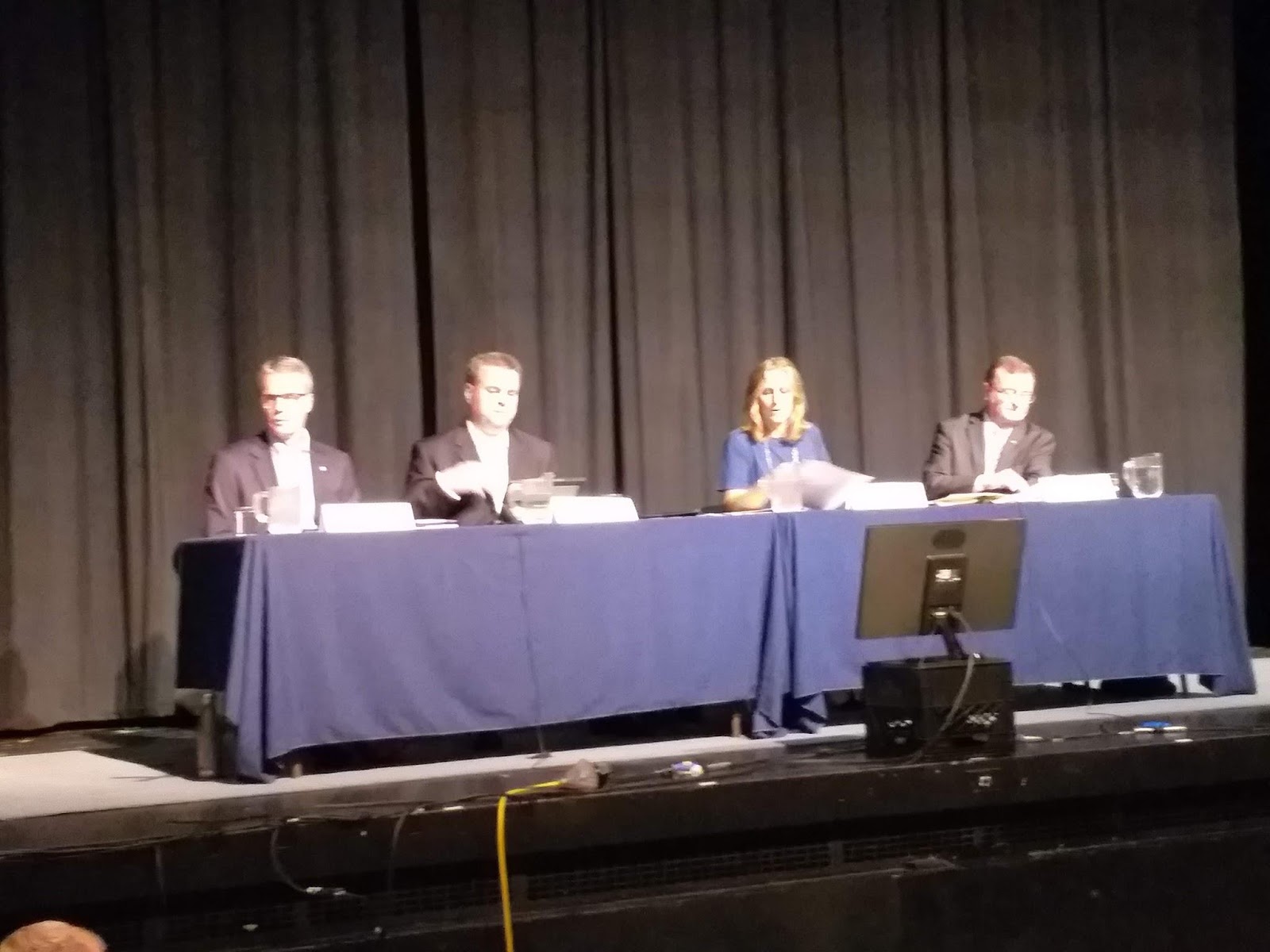 Outside the auditorium, several tables were laid with the various candidates’ pieces of literature. 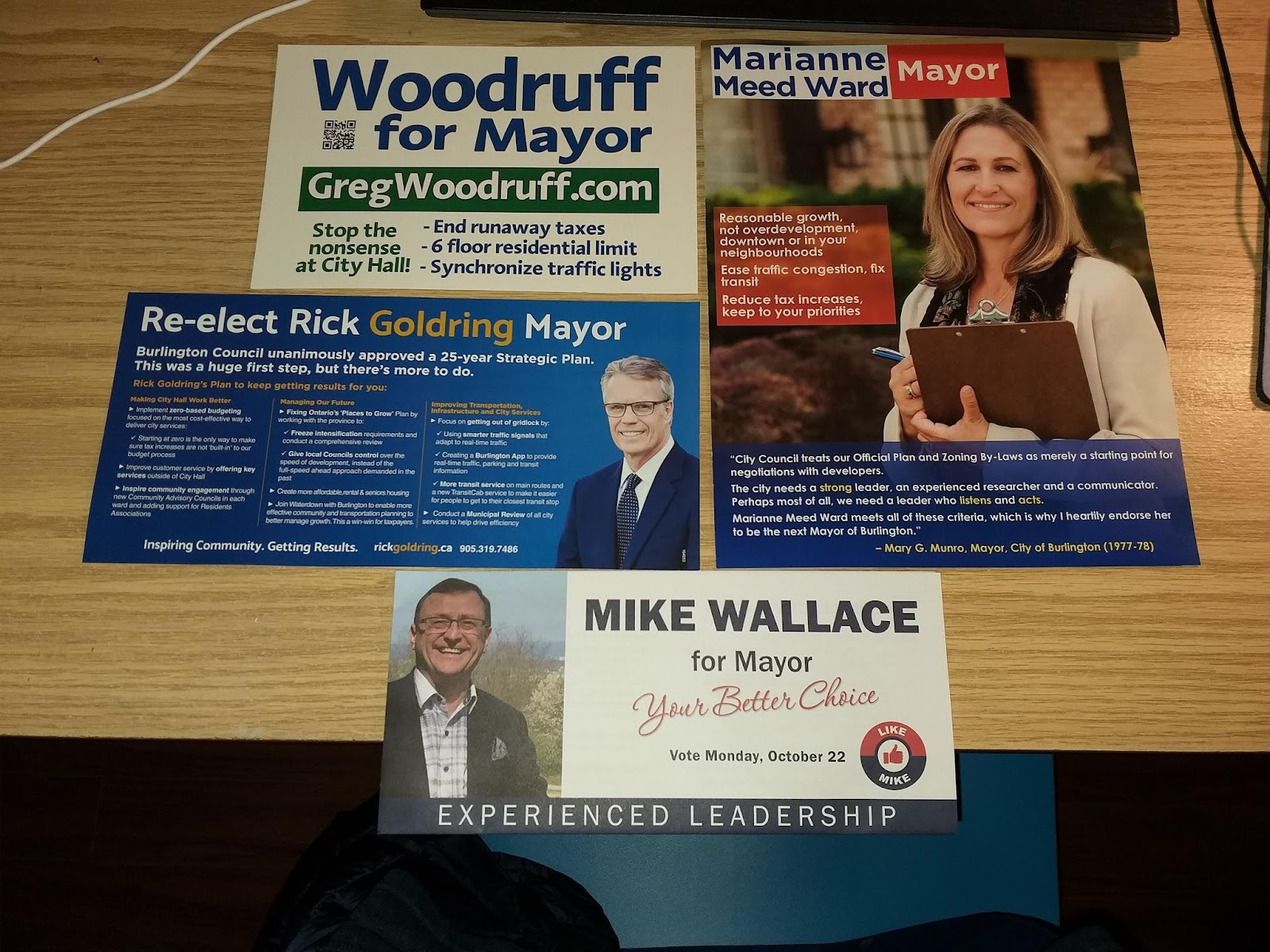 Although the debate focused much on development and how that issue related to economic growth, taxes and affordability, the end of the debate was when sparks really started flying.

In his closing remarks, Goldring used the opportunity to accuse Meed Ward of using her position as councillor to approve closing two schools, Bateman and Lester Pearson, while serving as a member of PARC committee at the Halton District School Board.

Meed Ward spoke about how she has been slandered and personally attacked in her closing statement, alluding to “outside forces” attempting to influence the mayoral vote.

An Aldershot resident and businessman who was also on the PARC committee penned this column to dispute Goldring’s allegations. But considering what Peter Rusin, who is running for Ward 3 councillor, put up as a ‘contrast’ between Meed Ward and Goldring, it’s not surprising she would say that.

Regarding the debate itself, development overshadowed almost the entire discussion as Meed Ward reaffirmed she was not some “NIMBYism / BANANA (Build Absolutely Nothing Anywhere Near Anyone) candidate”.

“Let me be clear: I am not against development; I am pro-growth, but the conversation is about where to growth,” Meed Ward said, citing how ludicrous it is to think 30 high rises in downtown Burlington, 4 times beyond what the city’s official plan called for, made sense.

In response, Goldring went back to how the province imposed these growth targets across all GTA municipalities back in 2006. “We need opportunities for young people and seniors looking to downsize into something smaller,” the mayor said, saying that this notion of 30 new high rise buildings, underneath an active pipeline, was not reasonable thinking.

Should he get re-elected, Goldring says he wanted to fix the province’s Places to Grow plan to freeze intensification requirements, conduct a comprehensive review and give council more control over the speed of development, instead of “a full speed ahead approach as demanded in the past.”

Wallace, the former federal MP and councillor, said he is the real ‘change agent’, compared to the bickering between Goldring and Meed Ward. “Switching seats around the council table is not real change,” said Wallace, while reflecting on his past record of cutting Burlington council’s size from 17 to 7 councillors and getting “7 straight years of 0 per cent tax increases,” although Wallace admitted how that contributed to an infrastructure backlog.

He also spoke of a vision of a “Liberty Village West”, a key plank in his platform of building a mixed-use development community, although Wallace’s policy paper doesn’t specify where it should go as of yet.

Woodruff was not so much promising many things but his candidacy came off as an attempt to lay out the realities of how politics and development is being done in Burlington, as he remarks came off more like deep dives into policy and how things really work, than the usual talking points.

“Development is about what do we (as a community) really want, and who is responsible for this style of development that nobody seemingly wants,” he said, blaming the province for the development targets, saying apathy is huge in Burlington and people need to start paying attention to what happens especially after the election is over.

“We have this self imposed idea of tall buildings in Burlington, so every single strip mall in this city has been targeted for redevelopment,” Woodruff continued, saying a simple truth that should seem obvious: if the city takes in more people, the traffic system gets worse because there will be more cars. Eventually, the traffic system would fail.

Woodruff is calling for a 6 storey height limit on all residential buildings in Burlington and traffic light synchronization as two of his major policy promises.

The four candidates also made other interesting points that came up during the debate:

The crowd did not sound like they bought into Goldring’s attack on Meed Ward about her alleged ‘undue influence’ over school closures. Considering the crowd was much older and most likely to vote, it sounded like desperation on the mayor’s part, though he sounded more optimistic when inhalton.com spoke with him after the debate.

“I’m pretty confident about my reelection prospects,” Goldring said. “I won with 48 per cent in 2010, then 86 per cent four years ago; I don’t think I’ll do as well this time, but I’m confident voters will send me back (to the mayor’s chair).”

We will see if he’s right come October 22.