Residents in west Burlington are up in arms over the plans of a nearby brick manufacturer to cut down trees behind their homes, a move that, according to residents, could have long lasting environmental and health impacts.

Meridian Brick, which operates the Aldershot Quarry, announced recently they were planning to clear cut the trees as part of their expansion of their commercial shale quarrying operations. The cutting is to take place beside Burlington’s Tyandaga neighbourhood.

The approximate location of the quarry can be seen in the map below, with the quarry being next to a large blanket of trees just north of the quarry. The residential homes are clearly visible nearby: 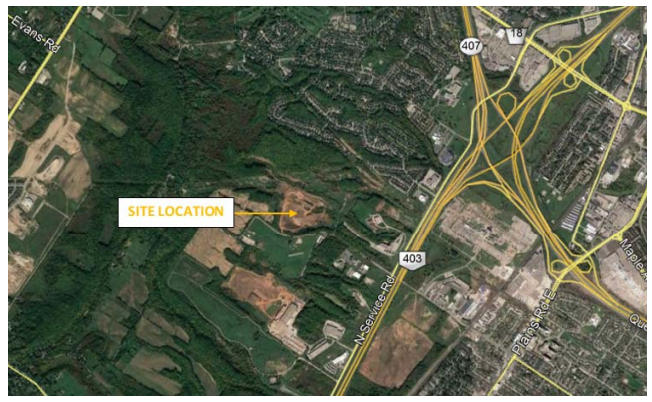 Meridian’s proposal would see the expansion of the current site from what is called their Centre Quarry with a crossing through a hydro corridor into a new East Quarry: 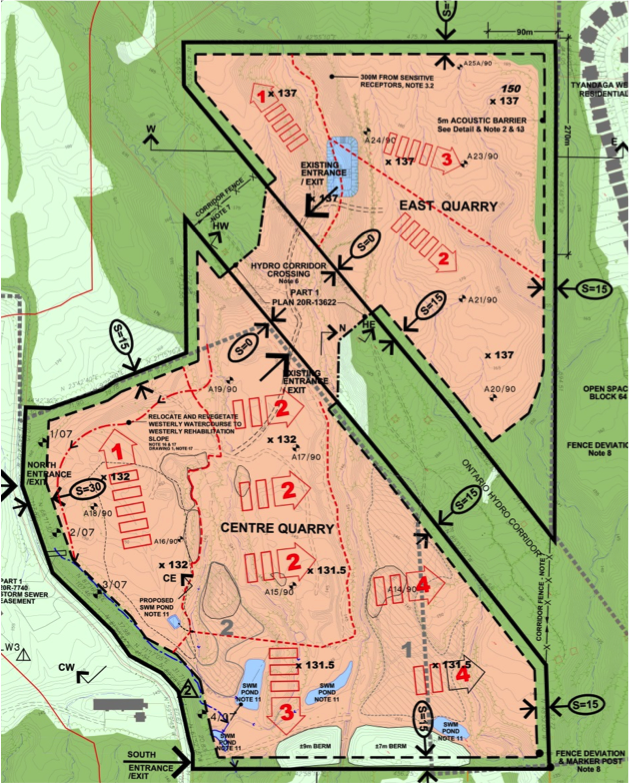 The company is invoking a 44 year old license that was issued in 1972 under the Pits and Quarries Act which, according to former Ontario Environment Commissioner Gord Miller, is legislation that no longer even exists. Miller gave his findings during a public meeting organized by the Tyandaga Environmental Coalition (TEC), saying that such a request would never have been approved under the series of laws on the books today.

An online petition to the Ontario Minister of Natural Resources and the Minister of the Environment has so far garnered almost 4,000 signatures, asking the province to revoke Meridian’s right to quarry the land. TEC has also provided a number of other opinions on their website. 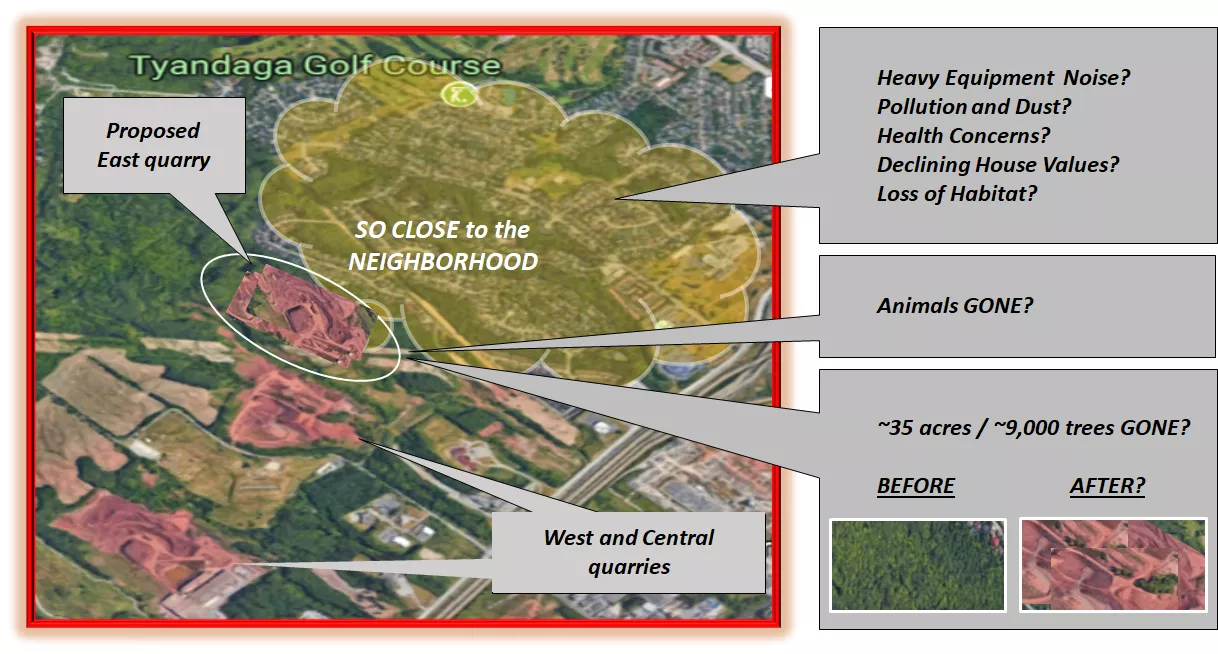 Meridian provided a number of their own studies as far back as the spring of this year, releasing latest reports a few days before a public meeting on November 29. At the meeting, Meridian and their consultants were presented with an updated version of this presentation that was delivered back in May, such as: 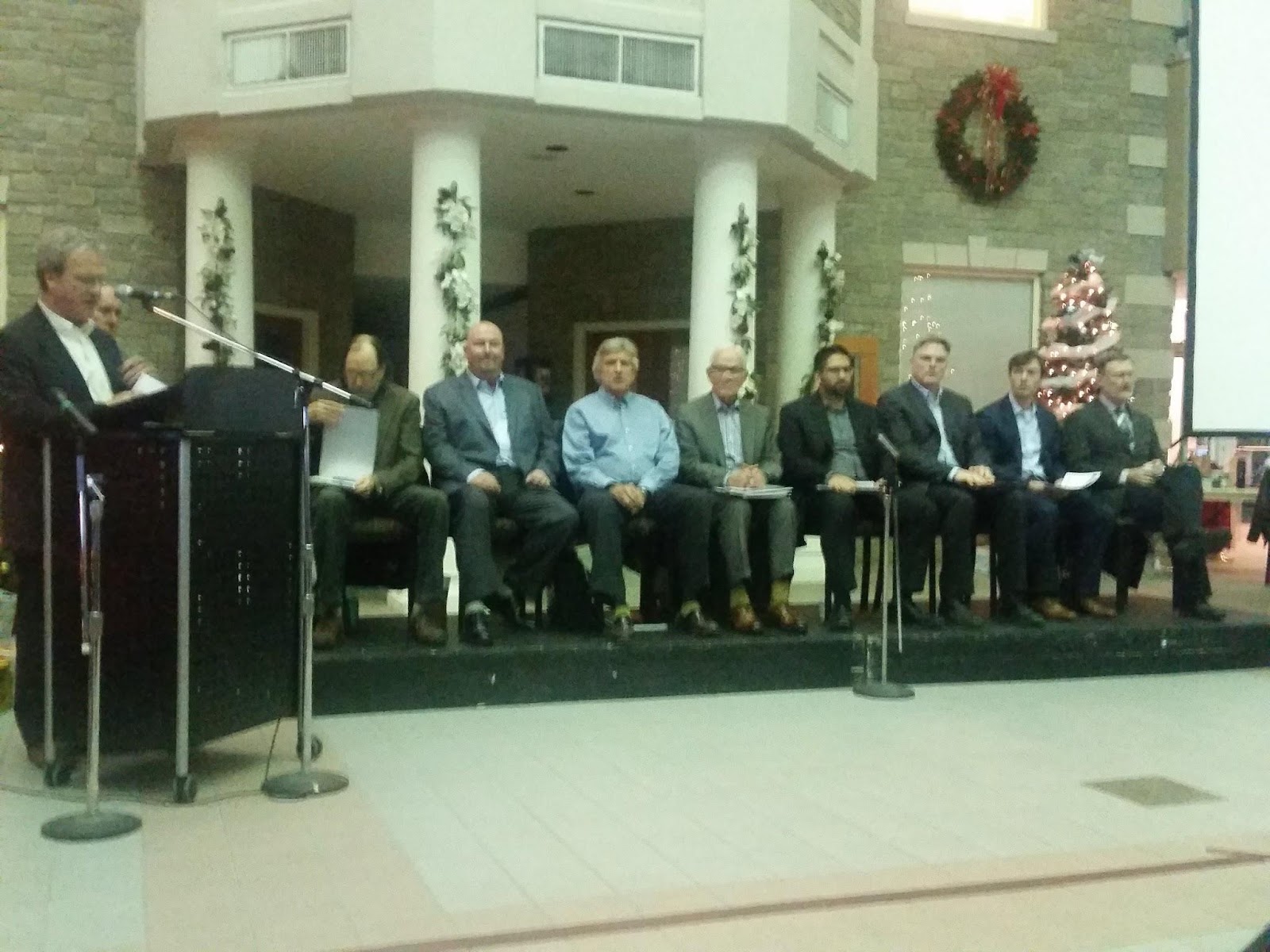 Representatives from Meridian and consultants take questions from Burlington residents at the Crossroads Centre in Burlington, Wednesday November 29

Suffice it to say, the residents were not very happy with the last minute reports released only days before. Nor did it seem the people from Meridian were prepared to take substantive questions from the audience, notably from David Donnelly of the TEC.

Donnelly was speaking in regards of having Meridian’s studies given a peer review, but it seems that TEC would have to put up resources themselves to get the peer review done, instead of Meridian taking the due diligence to put their research to a peer review themselves. Subsequently, a woman described how she used her own swimming pool to see how much particulate red clay was layering on the water’s surface.

One of the big issues was the timing of the cutting of the trees, because Meridian was given every indication that the tree cutting would take place during the winter months, before their final report determining the viability of cutting down trees would be issued. Unfortunately getting a straight answer on that question was quite difficult.

But it seems, according to Patrick Kelly from Meridian, “the studies would not have changed whether they cut down the trees or not,” in response to a question from someone asking if Meridian wanted to be good corporate neighbours, why were they adamant in rushing the clear cutting in the winter months?

Burlington Mayor Rick Goldring was in attendance during this meeting, as was Ward 2 Coun. Marianne Meed Ward and the local councillor who represents Tyandaga, Ward 1 Coun. Rick Craven. Another point of criticism was that it seems the city was not doing anything about this matter; one man told me when they spoke to a councillor (he didn’t specify whether it was Craven), he was told “Meridian has a license”.

Mayor Goldring has provided the following statement to inhalton.com in regards to the Aldershot Quarry meeting:

“I heard continued concerns from residents about the need for Meridian to provide them with greater assurances about how the quarry will operate. I have talked to many residents who share these concerns, and I support their requests for information that addresses any perceived threats to their quality of life. I understand that the residents are looking to file a request for review with the Environmental Commissioner under the Environmental Bill of Rights. This is an option I support.”

“The city has not taken a position, but my view is this: I will do whatever I can to protect the health of residents in this area, and the ecology of this site. I support requesting a Minister’s Zoning Order to review this area. The quarry is operating under (the) license issued in 1972.

“The key question is with everything we now know about our environment, human health and quarries, would they be issued a license under today’s standards?

“It was very disturbing to hear Meridian plans to begin cutting trees between January to March. The message from residents to Meridian (on November 29): don’t cut the trees at all, and certainly not before all studies are complete. I was very disturbed that they will not and have not released the raw data from the studies to the public, only their own interpretive reports. Some of these studies are not complete.

“Meridian said they would only release the data to an expert hired by residents. The public has a right to have these documents and shouldn’t have to hire their own expert to peer review them, in order for them to be released.

“It was disturbing that they haven’t developed a plan yet to consult with indigenous communities, even though they have recently found indigenous artifacts on the site. They must consult. The city can and should work with the public on this matter; the implications for our residents, and environment, and indigenous heritage should be of concern to everyone in the city.”

Inhalton.com did not receive a response from Craven at the time of this writing.

So unless the Ontario government comes in and intervenes, Meridian will start cutting down the trees during the winter months between now and into early 2018. But as it has been shown, there are still unresolved issues lingering and it seems Meridian is adamant on proceeding as planned, regardless of public feedback. Indeed, many of those in attendance felt this latest public meeting was simply window dressing for the corporation to go through the motions of having one.

If you were going to tell residents you were planning to clear cut thousands of trees to expand a quarry, possibly causing long term effects to human health and the environment, one would expect you would be somewhat more forthcoming with the information, or at least agree to have your research reviewed through more updated regulations.

For a company that says they have been part of Burlington for 60 years and has an investment of some $150 million in the local economy, Meridian really dropped the ball on this matter. At this point, it would not be surprising if we hear residents chaining themselves to the trees slated to be cut down in an attempt to block the clear cutting from happening over the winter.