Just when you thought the page had turned on this 18-storey condo recently approved by Burlington city councillors, another chapter in this story gets written.

In their appeal, the developers requested the restoration of the 23 storeys as they presented in their original version back in May. 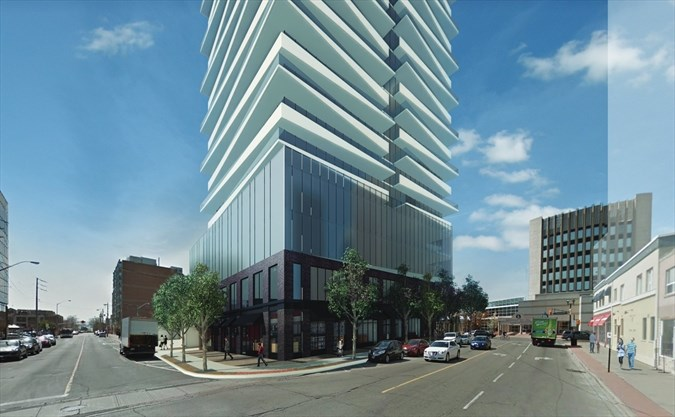 A quick examination of applications filed under LPAT under the City of Burlington does not currently show this appeal scheduled for a hearing.

Inhalton.com reached out to David Bronskill of Goodmans LLP (the firm representing Reserve Properties) for copy of the appeal from his client, but neither he nor anyone else at Goodmans has responded as of this writing.

Burlington mayor Rick Goldring had this to say:

“It’s disappointing to hear of Reserve Properties’ appeal of Council’s decision. Our message to developers must be clear: they are expected to conform to our planning policies. City staff provided an alternative recommendation for Reserve Properties that complies with the new adopted Official Plan as well as provincial policy.”

“Compliance with the new OP and provincial policy is critical in defending our decision and puts us in a favourable position at LPAT,” the mayor concluded in his statement to inhalton.

Ward 2 Coun. Marianne Meed Ward, who voted against approving the condo and is running for Burlington mayor, said city council left the door open for this appeal when they approved the other 23 storey building at the corner of Brant and James last November.

“I did not vote for either tower, and would have supported projects in keeping with the existing Official Plan for low to mid-rise here, which is appropriate and accommodates growth while being respectful of the character and infrastructure downtown,” Meed Ward said.

“The height and density of both towers are excessive for Brant Street; there is a reduction of overall commercial space by almost 70 per cent, so much for the argument that towers are good for business; and mitigation measures are required for shadow and wind impacts, among other concerns.”

“The towers will fundamentally alter the small-town feel and historic, low to mid rise character of this stretch of Brant Street,” adding that 12 storeys was the allowed height on one of the assembled lots (due to an earlier Ontario Municipal Board decision).

Burlington’s new Official Plan has not been approved by Halton Region, so therefore it is currently not yet in force and in effect.

The narrative is quite clear: the developer is not satisfied with getting the tall building to their exact height specifications, missing by 5 storeys, therefore they are appealing to the new LPAT.

Will the new LPAT system be more favourable to the decision made by local councils? In this case, either result was not palpable for those not in favour of the building, whether it was going to be 18 or 23 storeys.

Only time will tell.