One last attempt was made by Burlington residents to change councillors’ minds regarding a 23-storey condominium to be erected directly across from City Hall.

“Burlington has a quaint village feel in its downtown, and this city does not need to rush to look like Toronto or Mississauga,” said one resident during a packed city council meeting on Nov. 13

Back on Nov. 1, councillors voted five to two to send this application back to council for final approval.

While residents were hoping to change the minds of at least two councillors, thereby flipping the decision four to three against the development, the eventual result was never really in doubt.

It was the same councillors who sat on the planning committee who made the final decision, making this vote more of a formality.

Their vote this time was the same as before, with all but Mayor Rick Goldring and Ward 2 Coun. Marianne Meed Ward voting in favour as shown in the below graphic (Goldring hit the ‘yes’ button by mistake, hence his comments about ‘an inaccurate vote’ and council taking a second vote): 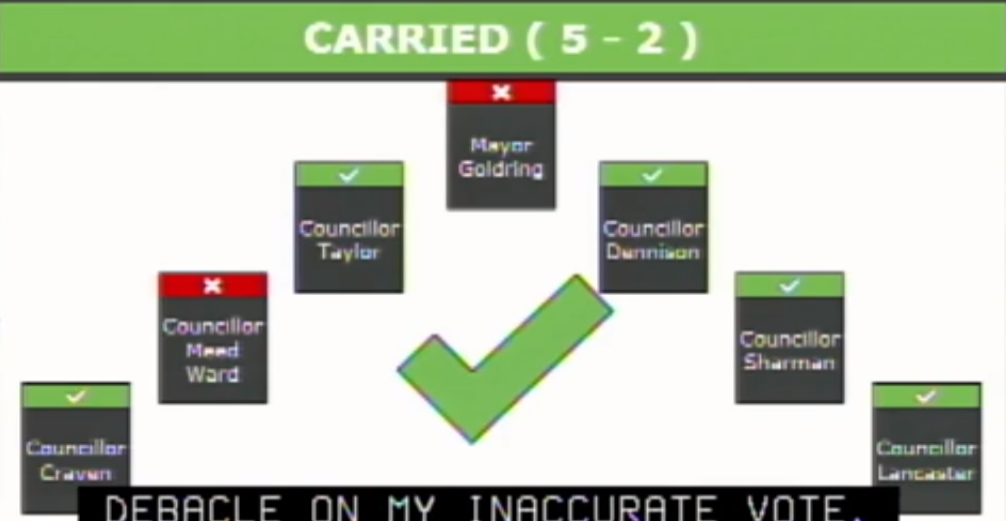 Goldring and Meed Ward repeated earlier concerns over the precedence this would set, saying allowing one tall building at this particular site now may alter future planning decisions. It’s not as though Burlington turns down tall buildings on a regular basis, said Goldring, as he cited Ironstone and The Strata as examples of other tall buildings erected around Burlington, but this site across City Hall was just not the right one.

“I think we are moving towards building a downtown that nobody will want to live in,” Meed Ward said in one of her responses, putting up this video about how these condos were creating a ‘retail desert’, stripping away Burlington’s quaint character in the downtown in favour of bland storefronts:

Burlington’s chief planner Mary Lou Tanner disagreed. She said urban downtowns thrive when there is a mix of residential, commercial, as well as extensive public green space. Tanner said those aspects are being expanded under Burlington’s Downtown Mobility Hub plan.

The chief planner also said the amount of retail space a community can support is fundamentally related to the amount of people that live in close proximity within a 10 minute walking distance.

Other city councillors also weighed in on upgrading the official plan, going back to a familiar refrain about the need for intensification. Some disputed the notion that such tall buildings were being crammed into downtown. Ward 3 Coun. John Taylor he voted against having tall buildings down by the waterfront because that would have obstructed the view of the lake, and said arguing over six more storeys without taking in context of the entire downtown is not good planning or good politics.

Ward 4 Coun. Jack Dennison agreed, saying this does not mean every building in the future will have 23 storeys, stressing the city had to grow in a way that met future financial obligations. “No one is calling for a downtown full of tall buildings, and this one 23-storey building won’t make that happen,” Dennison said to an audible chorus of boos and hisses from the audience.

There were some remarks from members of the audience who registered to make deputations in front of councillors before the vote. A gentleman named Dave commented on how attractive this proposal would actually be for millennials. He asked how plausible it would be for young people between 20 and 35 to actually be able to afford a 600-sq. ft. unit that is most likely going to cost close to $400,000. That is not exactly affordable housing, unless Halton Region buys them and adds it to their housing stock.

Another consideration was the additional vertical commute young people would have to take getting down the elevator. You know who doesn’t need to worry about how long it takes to get up and down in an elevator? The 23-storey building wasn’t really for young millennials, more like well to do retirees. Burlington likes to talk about ‘growing bold’, but Dave said it should change the slogan by taking out the letter ‘B’, since the plan sounded more like “Growing Old” should be the slogan.

Another gentleman named Gary said the justification for intensification in the downtown because it is a mobility hub was rather weak. He asked how did Oakville, with only one “mobility hub” at the Oakville GO station, escape intensification with the presence of the station and bus routes, yet Burlington is “over-building”? Is it wrong for city council to question the arbitrary decisions of the provincial government? Gary called for two councillors to change their minds, and at least switch on a yellow light for more incremental developments.

There was one man who said that since this was a political meeting, a political decision has already been made by councillors that do not seem to be listening to the people who elected them. Taylor earlier said arguing over a few storeys was not good politics. But the definition of good politics depends on where you sit. It may not be good politics for residents sitting in the public gallery, but for at least five Burlington city councillors sitting around the chamber, the politics don’t look that bad.

Take into consideration that aside from the mayor, this was a decision imposed on the residents of Ward 2 by every other councillor excluding the actual councillor representing this area. I have no doubt that residents from elsewhere across Burlington have concerns over their downtown, but are there enough of those people in opposition in all the other wards in the city to cost incumbent councillors votes in next year’s elections? Most likely these councillors factored in that consideration when casting their votes, seeing they would have little to lose.

But might their decision for this high rise downtown condo be the catalyst that would spur some people to mount heavy challenges against them in their constituencies? These are the results from the 2014 Municipal Elections in Burlington. All but Ward 6 Coun. Blair Lancaster were re-elected by comfortable margins; could that change?