What Brampton Mayoral Candidates Are Saying in Debates

While Mississauga Mayor Bonnie Crombie appears to be sleepwalking into an easy reelection come October 22, sparks are flying and much shade is being thrown in the race to elect Brampton’s next mayor.

There are 7 candidates all with their own ideas on how to run Canada’s ninth largest city. One of those not previously profiled, Vinod Mahesan, now has a website and Facebook page identifying himself and why he’s running for mayor.

But what do these six men and one woman (that being Mayor Linda Jeffrey, seeking a second term) actually stand for? Three debates that took place this past month gave people a glimpse into where they want to take Brampton in the next four years.

This is the debate hosted by the Brampton Board of Trade on September 17, with Jeffrey, Patrick Brown, Coun. John Sprovieri, Bal Gosal and Wesley Jackson in attendance.

The second debate was held on September 20 at Sheridan College Davis campus, hosted by former Toronto Star reporter San Grewal, and included candidates Mansoor Ameersultan, Brown, Gosal, Jackson, Mahesan and Sprovieri. Jeffrey was originally scheduled to attend but called in sick. Parts 1 and 2 are below:

And a third one was hosted this past week by Brampton Focus Community Media, but only Jeffrey, Brown, Gosal and Sprovieri were invited to debate at the Rose Theatre in front of one of the most packed crowds for an election campaign, with audience members jeering and cheering loudly whenever candidates spoke.

For a detailed live tweet of what transpired at the Rose Theatre debate, this local policy wonk did a fantastic job putting down what happened. 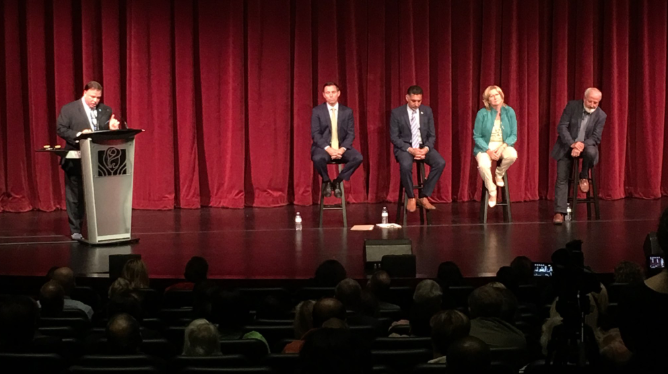 The political vitriol between the current mayor and the former PC party leader is on full display, as each brought up past scandals involving cancelled gas plants (for Jeffrey), sexual misconduct allegations and legal issues with PC party nominations (for Brown).

“I’ve been in Brampton since 1983; I’m invested in this community, not just here trying to resurrect my political career,” Jeffrey said in her opening remarks at the Rose Theatre debate, to a chorus of jeers and boos.

Meanwhile, Brown kept invoking Hazel McCallion, the former Mississauga mayor, saying he would aggressively attract businesses to Brampton the way McCallion did for her city. Brown kept returning to this theme that Jeffrey was only able to get “scraps” when it came to the university or more hospital beds from her former Liberal provincial colleagues.

“If I was the mayor and the health minister came to Brampton saying the province is adding (only) six new hospital beds, I would have kicked him out of town,” Brown said at Sheridan College, saying he would fight for better hospital funding.

The third debate at the Rose was when Brown and Jeffrey really had their opportunity to go after each. Jeffrey brought up the trust issue, referring to an ongoing police investigation into PC party nominations. Brown then brought up how the former Peel police board chair was fired by Jeffrey and others, which Jeffrey disputed.

“You (Patrick) are just lying and misleading and you have no idea what you’re talking about,” the mayor replied. Overall, if the election was between those two it was a matter of who would be able to deliver for Brampton; Jeffrey touted progress is being made while Brown said things needed to move faster.

Sprovieri fends off charges of ‘racism’

Jeffrey wasn’t just going after Brown at the Rose; she had harsher words for her colleague on council, John Sprovieri. The 30 year council veteran is saying that his experience would be better suited to get Brampton’s priorities moving. “I think I actually have a chance to talk to Doug (Ford) than Patrick,” Sprovieri said in reference to Brown’s complicated relationship with the Premier.

On a question regarding his alleged racist comments from last year, Sprovieri mentioned how he checked his ancestry and discovered that he has North African heritage in his family. “I am not a white supremacist, nor am I a racist,” he said to jeers from the audience, but if you have to say that out loud in public, that speaks volumes.

“He is the only member of my council that has caused me, and the city, much embarrassment with his comments. Brampton still struggles with its diversity, and we need to do a better job,” Jeffrey added. The mayor also said there were new, ‘more diverse’, candidates running that people should take a look at, though she didn’t name anyone specifically running for council.

Sprovieri picked up further flack for his role in cancelling the LRT into downtown Brampton three years ago, particularly from young people in the audience. “I still support the LRT, but an east to west route,” he said.

Watch out for Wesley Jackson

The Brampton lawyer was left out of the Rose debate, so the most recent one he attended was at Sheridan College. But he’s provided some rather interesting answers that came off sounding more like philosophical deep dives than political talking points.

In response to a question about carding, Jackson pointed out inherent biases of police officers who do not know they are biased when accused of racial profiling, although he did state he is against bringing back carding. The same inherent biases also were at play when it came to Jeffrey’s decision making on the LRT.

He also referred to numerous writings on Brampton’s Vision 2040 proposal, saying properties like the golf course needed to be reclaimed but the city needed to revise their infill planning policies and that Brampton needs to make building higher density housing more profitable.

Jackson was not shy about spending money to build another hospital. “I have the political will to bite the bullet and spend the money to build a third hospital and upgrade Peel Memorial,” Jackson said, saying there was existing land that the city owns that could be used.

In 2010, Calgary saw an obscure university professor named Naheed Nenshi running for mayor, but nobody took him seriously in comparison to two more high profile candidates. About a month before the election Nenshi polled around 8 per cent; he ended up winning the election with 40 per cent, becoming the first Muslim mayor elected in Canada.

Jackson has that professional background and is articulating policy positions in a concise manner like the Calgary mayor. If someone like Nenshi can come out of nowhere to win, who’s to say Jackson may not suddenly become a surprise dark horse contender as election day rolls around?

Why is Bal Gosal even running?

He may have good intentions in mind, and some different experience having been in the federal cabinet of the former Conservative government, but it seems many are asking why Bal Gosal, the former sports minister, is even running at all.

In all the debates, he’s parroting lines that Brown or Sprovieri are saying, but with a softer tone and obviously less baggage than Brown or the controversial councillor. Aside from saying there should be more community policing stations and tying economic development to promoting sports, Gosal has yet to give a clear reason why Bramptonians should vote for him as their next mayor.

The one upside could be that many of Gosal’s former federal colleagues now serve as ministers or MPPs under Doug Ford; that may be a good opening to leverage those relationships in getting more for Brampton. And speaking of…

The looming shadow of Doug Ford

If the Premier was vindictive enough to cancel democratic elections outright in order to thwart the plans of political foes, it wouldn’t be surprising to see Ford or his people get involved with the Brampton mayoral race.

He’s not going to cancel the mayor’s race, let’s be clear about that, but it may be the more traditional forms of attack, such political ads or dirt on Brown that could hurt his standing in the race. It may even become desperate enough that Ford may start saying nice things about Jeffrey, a former Liberal minister.

Stranger things on the political scene have happened already; these suggestions are rather normal by comparison.

Will there be a debate with all seven candidates?

It’s passing strange that in an election with seven candidates, no one has been able to organized one with all of them attending. By a stroke of bad luck, Grewal’s debate at Sheridan College only missed Mayor Jeffrey due to her feeling under the weather.

The BBOT debate and Rose Theatre one left out certain candidates while giving stage to others. But if there is only 7, then residents should have the chance to at least hear from all of them even once before the October 22 election arrives on their doorstep.