Varying opinions hashed out on a future Brampton university

What does Brampton want for a potential future university?

That’s the question City Council deliberated over as they held a town hall inside council chambers on Tuesday, January 28 about the city’s proposed future post secondary institution.

“We’re proposing a new, innovative solution; ‘Brampton U,’ a city-led effort with the goal to get provincial approval to launch our own fully accredited university right here in Brampton,” Mayor Patrick Brown said when the idea was first announced, saying the city is seeking the right partnerships with academic institutions as well as support from the community.

After Brown was elected mayor in 2018, the provincial government made an announcement that they would no longer be funding the city’s downtown Ryerson University-Sheridan College, which was previously promised by the Liberal government.

While Brampton currently has Sheridan College’s Davis Campus, along with smaller partnerships with Ryerson University’s Chang School of Continuing Education and Algoma University, Brampton’s 2040 vision calls for a university of its own.

The town hall reviewed findings done by polling firm Mainstreet Research on what Brampton residents have to say about having a university in the city, as well as the specific action the city is requesting higher orders of government take. Namely, bringing Brampton U into existence via provincial legislation. 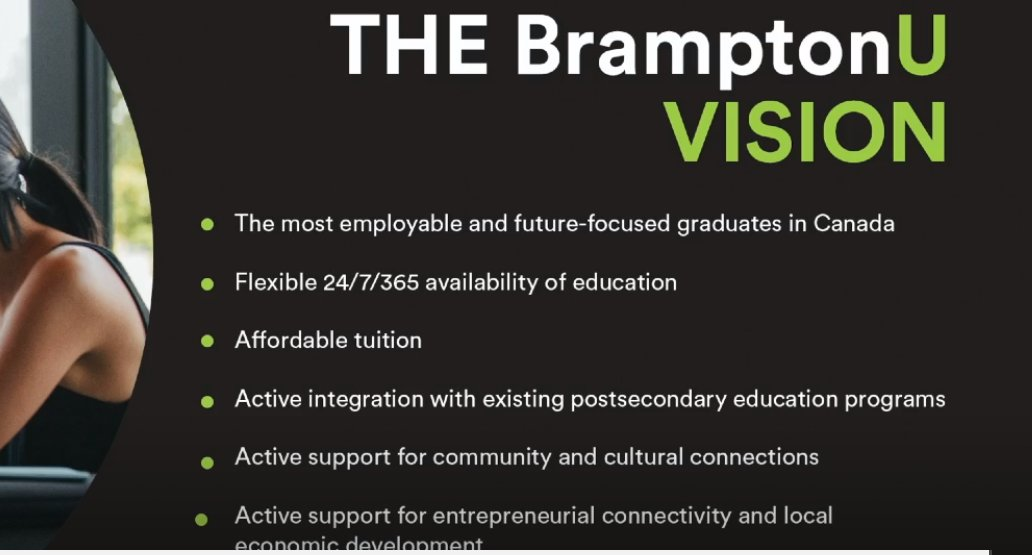 Along with members of council, Dr. Janusz Kozinski (a ‘higher education expert’) was there to present what a future university would look like and should focus on and Joseph Angolano presented findings from the Mainstreet poll, which sampled 1066 adults, 18 years or older living in Peel, between December 5 and 11.

Below are the four features of a potential university residents in Brampton and Peel Region rated as on top of their minds, with 65 per cent prioritizing that the institution be closer to home.

“People don’t want the same university that their parents or grandparents went to,” Angolano said, saying that having a general arts degree these days would not be servicing the current needs of Brampton. Kozinski added that a future university should focus on other curriculum.

Following the presentations a number of councillors, Mayor Brown and residents came forward offering their questions and comments.

Health care worker Ameek Singh, who also hosts the show “Big Talk” on Sauga 960, asked if Brampton U would lead to an actual job stream with business partnerships and how the other university partners in the city fit in this picture.

Other residents asked about having a cybersecurity component, already part of the agreement with Ryerson, entrepreneurial “hubs” and having a medical school in the proposal.

Steve Kerr, a pastor and former city council candidate, talked up the need for a ‘state of the art’ athletic complex as part of the proposed university. “We can put Brampton on the world map for athletics,” he said, saying city can attract more sport options besides cricket and have the ability to attract athletes from places outside the city, like Georgetown and Milton.

As for what steps the City of Brampton has actually taken besides asking for the province to enact legislation. Brown said that in the province’s pre-budget consultations for the 2020 budget, the city included Brampton U in their proposal to both opposition parties and the government. A list of ‘shovel ready projects’ was also presented to Brampton’s federal MPs at a recent meeting.

The mayor added that representatives from Algoma U and Ryerson are scheduled to address council the week after this town hall.

“The numbers show that Brampton has been left behind,” Brampton NDP MPP Gurratan Singh, who attended the town hall, said, referring to previous university funding cancellation, motion from NDP to reverse that cancellation.

While most people who spoke to council were of the opinion that they want a university, there were two others that brought up some points not previously mentioned or often highlighted.

Sylvia Roberts, who often live tweets council and planning meetings as @BramRecorder, pointed out that an existing post secondary institution, Sheridan College, already offers the programs that the city is proposing that Brampton U should offer, saying there are not enough students going to university to justify having one in Brampton.

“There wasn’t enough of a student population to justify having a university; that’s why the (Ford) government cancelled the funding,” Roberts said.

Former mayoral candidate Wesley Jackson asked why it seemed the entire discussion only revolves around downtown revitalization, and the university isn’t even being considered anywhere east of Highway 410.

“When is Bramalea going to get recognized?,” Jackson asked, adding that some $4 billion is being on downtown revitalization, while east of the 410 there is basically nothing. “Bramalea has better access to amenities than downtown,” he continued.

Coun. Paul Vicente assured the crowd that, along with downtown Brampton, other locations are still under consideration.

When it comes down to it, it’s up to the province to accept or reject Brampton’s request to legislate a university into existence. A solid and credible business case needs to be presented, as this is a government concerned over spending and the numbers, as they self profess.

But there are lingering questions, mainly based on the proposed location as well as the need for an entirely new university at all. As many have stated, there is Algoma U, Sheridan College as well as Ryerson. Isn’t Sheridan College already offering the same programs that this new Brampton U is supposed to offer? Why not just expand on Sheridan College.

It may be called a ‘college’ but with the way post secondary education has advanced, Sheridan is pretty much a university in all but name.

The point about location could be the start of a wider discussion of developing other areas of Brampton besides downtown. Let’s just look at one aspect: parking. The parking situation is abysmal in downtown Brampton; do you really think you’d accommodate a future student population down there? The area around Bramalea City Centre has more parking spaces for students, as well as amenities like food and the library.

As Jackson stated, why does it HAVE to be downtown?