Police investigating reports of a break-in in Brampton

This Embattled Brampton MP Is Not Resigning After All

A Brampton MP who announced he would be stepping down to deal with “personal and medical issues has now changed his mind.

Liberal Raj Grewal put out this video to the Globe and Mail last week, which he also put up on his Facebook page. In it, the 33 year old politician said his earlier announcement that he would step aside was made under duress.

“In a highly emotional state, completely exhausted and facing an extreme time constraint, I made an ill advised statement on Facebook that I would be resigning my seat. I can see how some might think that it is right for me to resign,” said Grewal. He added that he will now be leaving the Liberal Party caucus, taking a leave of absence to focus on his mental health and recovery.

He also addressed a number of other controversial issues surrounding him the last few days. With regards to the mental health issues, Grewal said they stemmed from compulsive gambling that dates back since his university days. While in Ottawa he was staying at the Hilton Hotel in Gatineau, which was also connected to the Casino du Lac Leamy.

“In early 2016, I first started to visit the Casino recreationally to play blackjack. This quickly escalated into a significant problem as I started to play high stakes, high limit blackjack. On an average sitting, I would spend between 15 to 30 minutes at a table, and I either won a lot of money, which made me continue to chase wins, or I lost a significant amount of money, which threw me into complete despair,” Grewal said.

Another allegation was that Grewal was using his position on the Finance Committee in Parliament, asking questions about money laundering to see if his gambling was being tracked by the authorities was “a stretch of reality and to take the situation completely out of context,” in Grewal’s words. What he is referring to was this exchange last week during Question Period between an NDP MP and Prime Minister Justin Trudeau.

Liberal MP Raj Grewal asked troubling questions on money laundering at the finance committee. I asked the Prime Minister if he knew about RCMP concerns and why back in September he removed the MP from committee. Trudeau refused to fully answer my question. pic.twitter.com/3w31IfGk1n

The MP also said that while he had borrowed money to feed his gambling addiction, he said he paid back every loan he had taken out. Regarding other areas of his personal finances, Grewal said he and his wife maintain separate bank accounts, that he does not own more than one vehicle (only co-signed a lease on a vehicle for a friend) and that he does maintain three lines of credit which were disclosed to the ethics commissioner.

“My wife and I jointly purchased one condo in Toronto for $1.44 million where we currently have a for $1 million. Like many young Canadians, we worked hard, saved, received help from our parents and invested in real estate as part of our financial plan. The media has implied that the mortgage is in excess of its purchase price, which is not true and not possible under Canada’s banking regime,” Grewal said.

Finally, there is the controversy that he is moonlighting with another company while serving as an MP. Grewal said that these “other employment relationships” were both disclosed to and approved by the ethics commissioner.

“Since January 2018, I ended my relationship with one employer and continued to work in a limited capacity with another for the purposes of maintaining my legal skill set. I have worked with the ethics commissioner regarding my employment and will continue to cooperate with his office,” the MP stated.

Grewal ended his statement saying he will make a decision about his political future before Parliament resumes in the new year.

In the end, what does this mean for the people specifically in Brampton East?

The toughest issue to hear about is Grewal’s gambling problem. Sometimes we forget that those in elected office are only human beings, subject to the same human failings as the rest of us. It is even tougher to swallow when mental health issues are involved.

As for the issues surrounding Grewal’s finances, there’s nothing stopping anyone in Canada from embarking on the decisions that Grewal made with his money, such as taking out a mortgage for a downtown condo and opening several lines of credit. Even his resignation from Parliament would not have stopped any investigation from taking place.

But this goes to the wider issue of whether greater scrutiny is needed not only in the federal government when it comes to screening or giving security clearance to Members of Parliament, which is not the case right now, but whether political parties need better internal mechanisms to screen the people who run as candidates under their banner.

Before when he apparently resigned, the talk was who could run in that seat. Now the talk is probably whether Mr. Grewal can weather the political storm (he was recently nominated to stand as a Liberal candidate in Brampton East for the 2019 election) and get reelected.

One other thing to take note of, and this is either very sad or just goofy, is a case of mistaken identity taking place with Sikh politicians. Here is a tweet of a story about Grewal from the Toronto Star, but apparently they used a picture of NDP leader Jagmeet Singh instead.

did the star just run a story on raj grewal with a picture of jagmeet singh? because, if so, that's, uh… bad. pic.twitter.com/uA6fGyG8yF

As if that wasn’t enough, here is another story about Grewal, but this time the publication used a picture of Gurbir Grewal, the Attorney General of New Jersey instead. 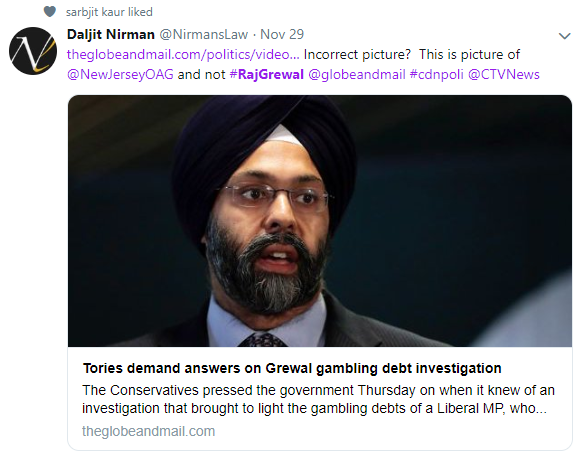 Do you think Raj Grewal’s political career is over, or does he get a second chance?