It looks like there may be some changes in bus routes in Brampton in the future, as there are plans in the works in conjunction with the Queen Street Bus Rapid Transit Corridor.

The city has launched a number of public information sessions to get feedback on Brampton’s annual transit plan held in various locations across the city, such as at the Brampton Gateway Terminal, Cassie Campbell Recreation Centre, Gore Meadows and the Bramalea Terminal.

Here’s a look at one of those sessions held at Cassie Campbell this past weekend.

With $166 million approved in the recent city budget, staff were on hand to present a number of proposed bus route changes in Brampton, particularly in the Gore Meadows and Mount Pleasant areas.

For example, here’s the existing Brampton Transit routes in the northeast corner of the city, off Queen Street and Highway 427. Next to it are two proposed options. 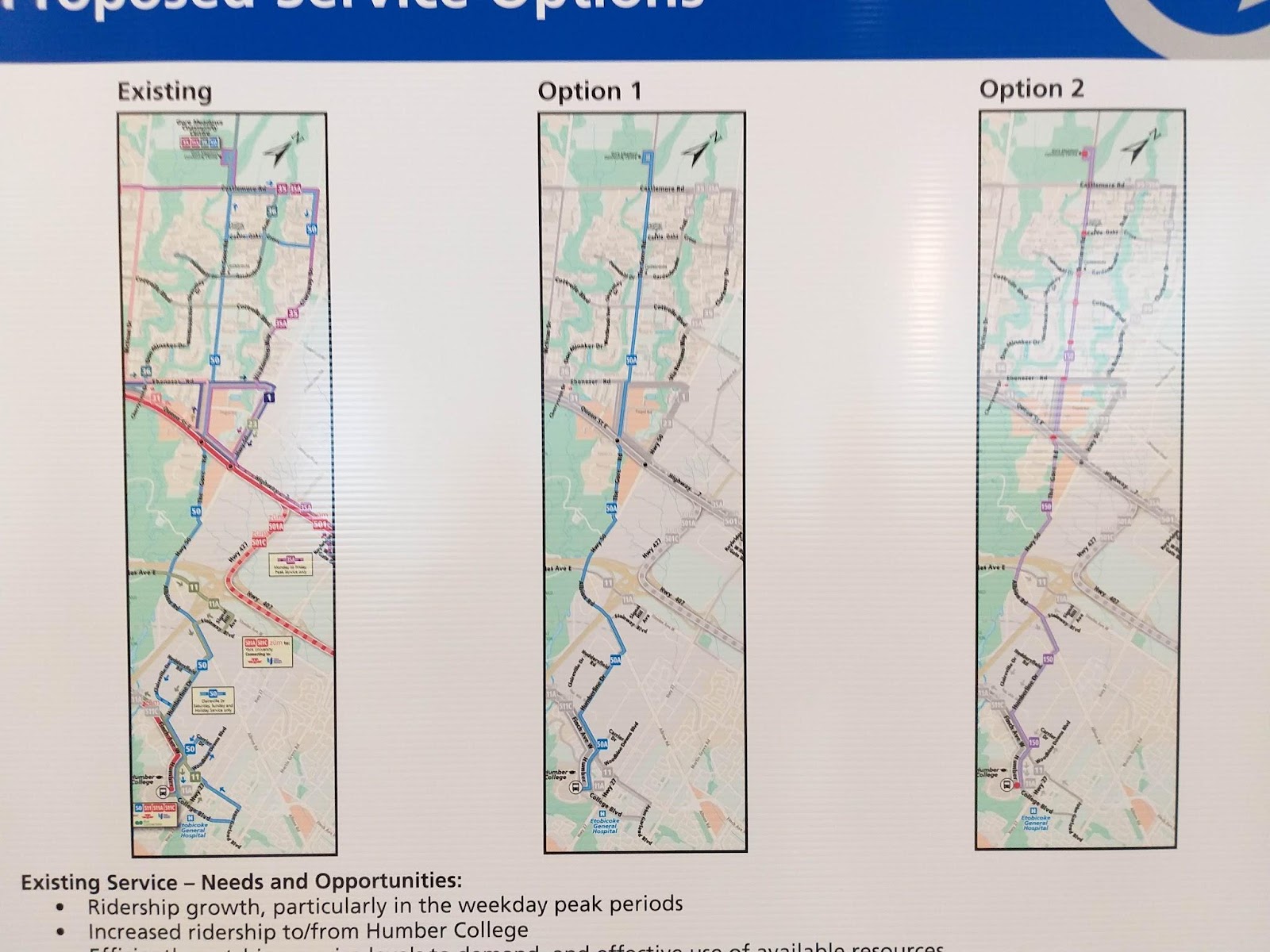 Here are the various options for this set of existing bus routes. 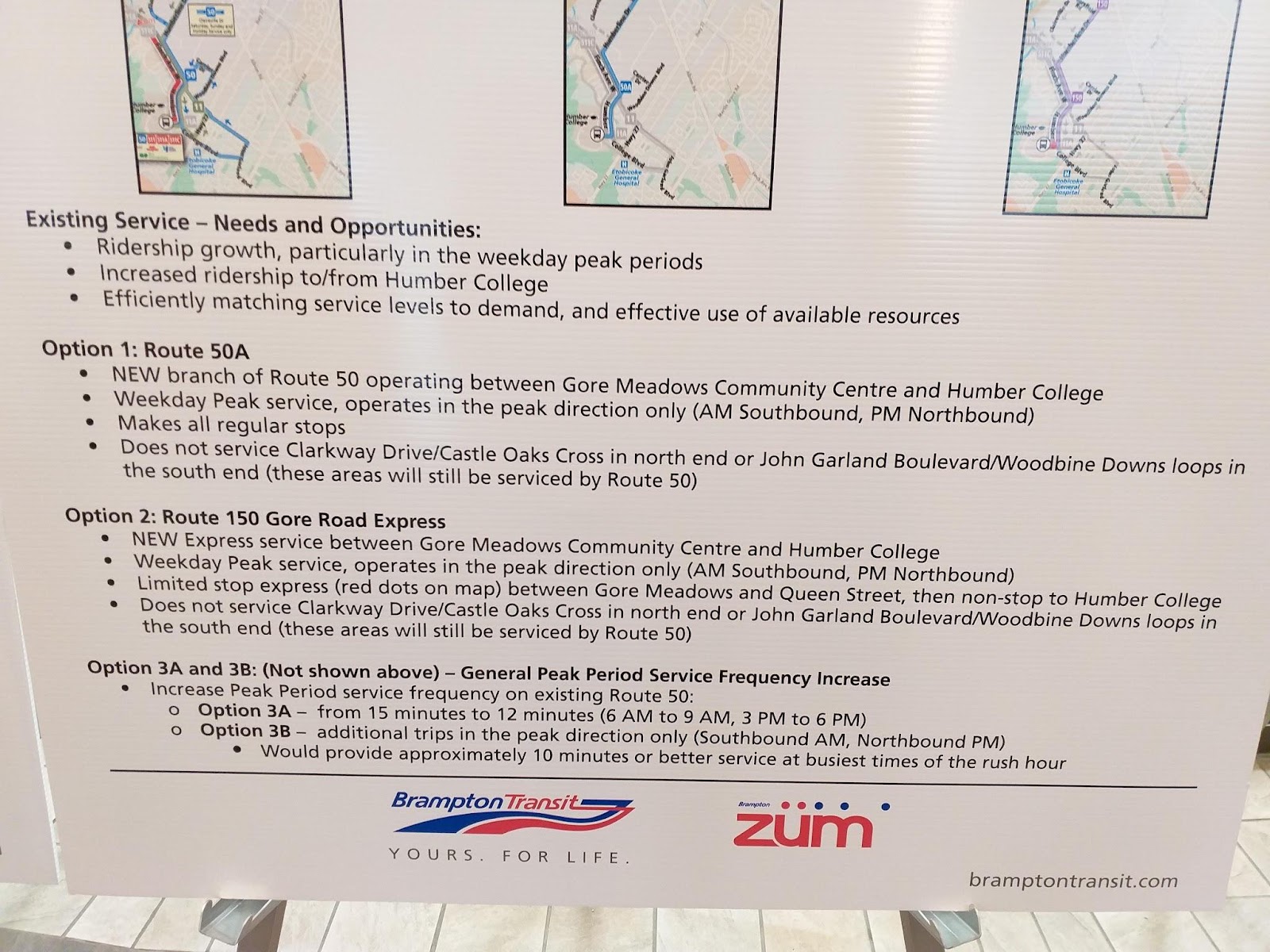 Next were examinations for bus routes in the Mount Pleasant area. 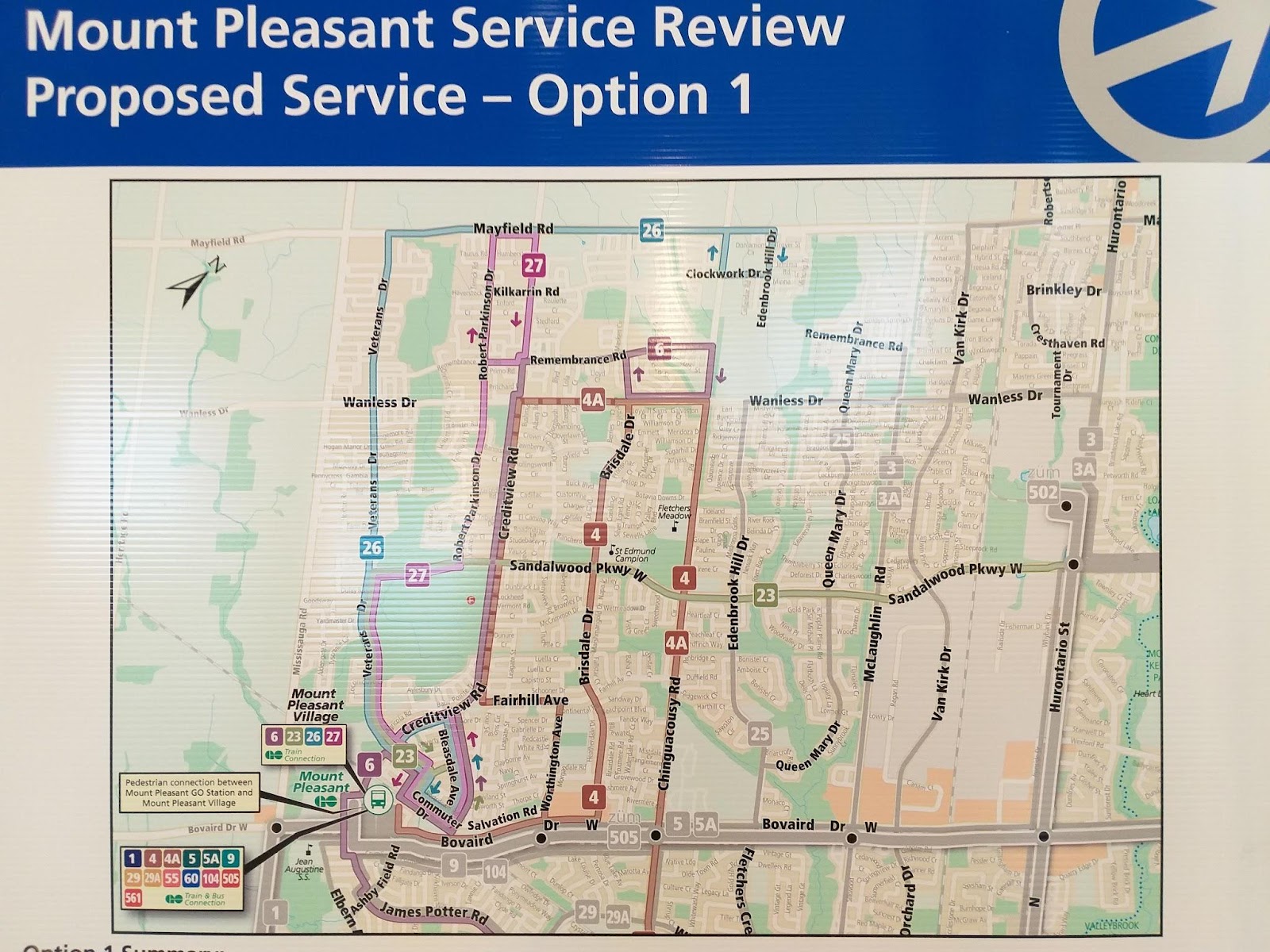 As stated below, Option 1 realigns some routes to cover new areas, but with some gaps in coverage on evenings and weekends. This is being proposed to reflect planned longer term realignment of routes in the area. 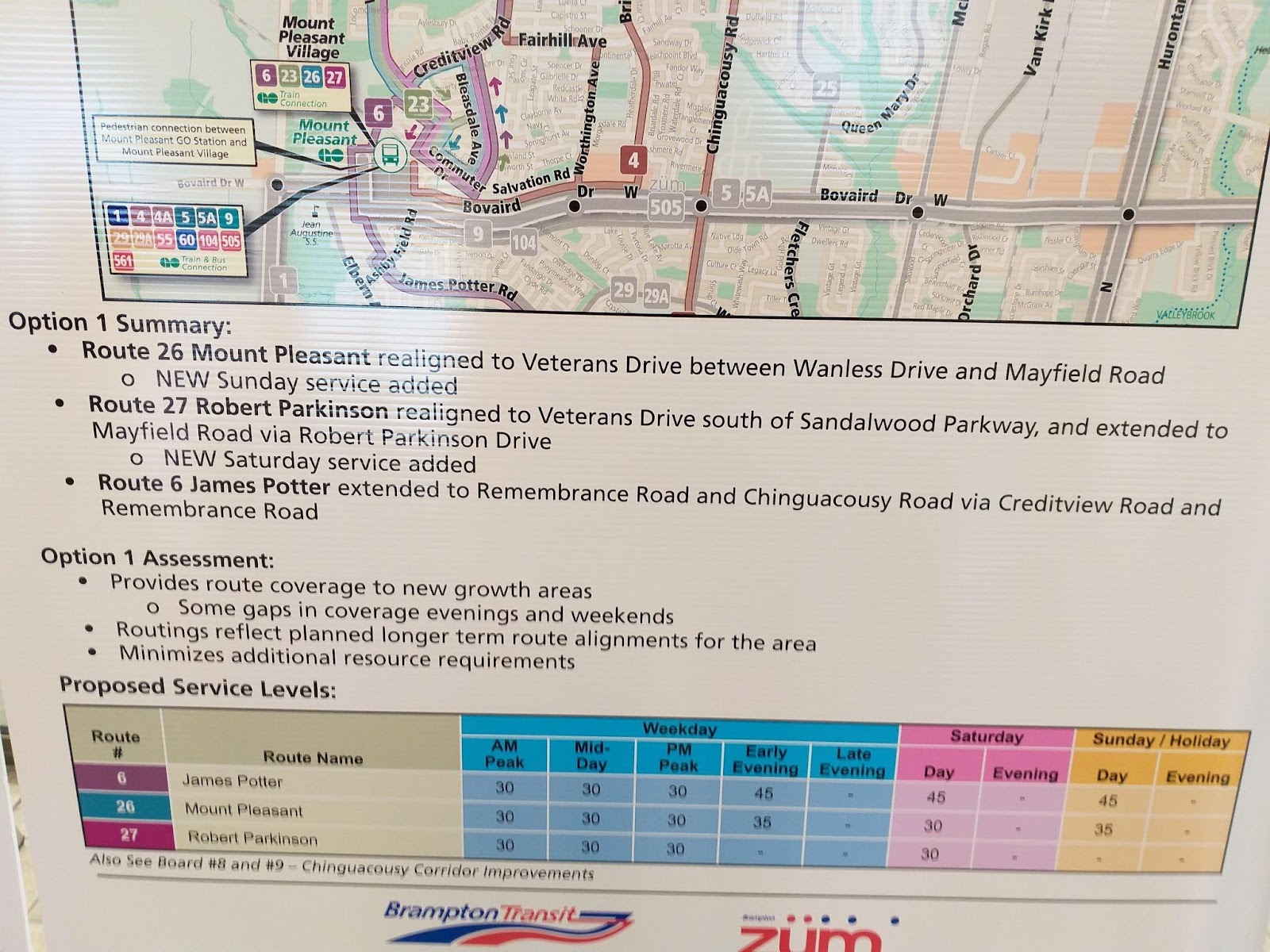 Option 2 would see a new Sunday service added on Route 26 Mount Pleasant, with realignment between Wanless Drive and Mayfield Road. Also a new Saturday service for Route 27 Robert Parkinson while extending it to Remembrance and Chinguacousy Road. 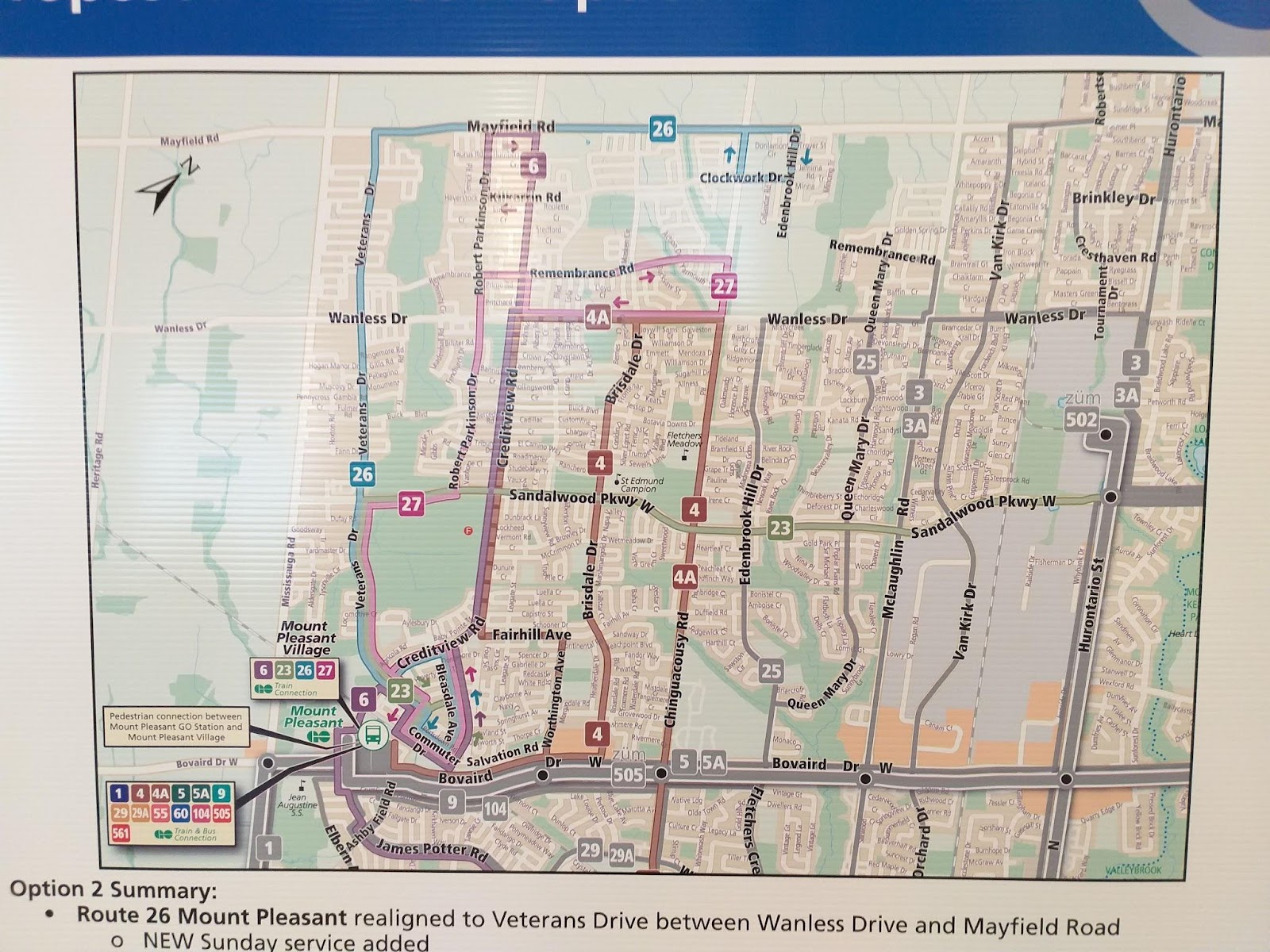 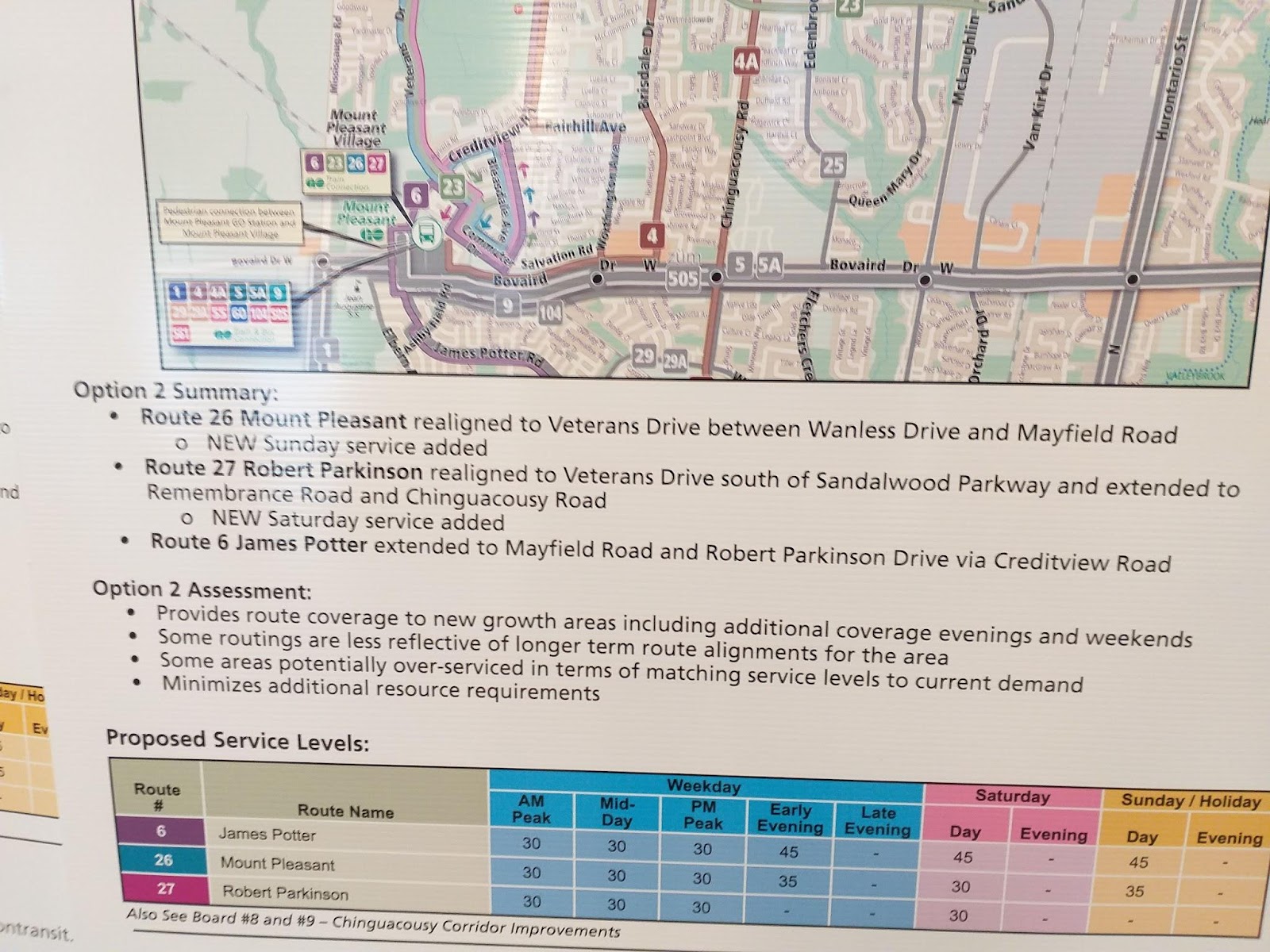 Option 3 for the Mount Pleasant area would see realignments to Route 26 and 27, but a new Route 28 added on Wanless operating between Mount Pleasant Village and the Sandalwood Loop via Creditview and Wanless Road, as well as Hurontario Street. 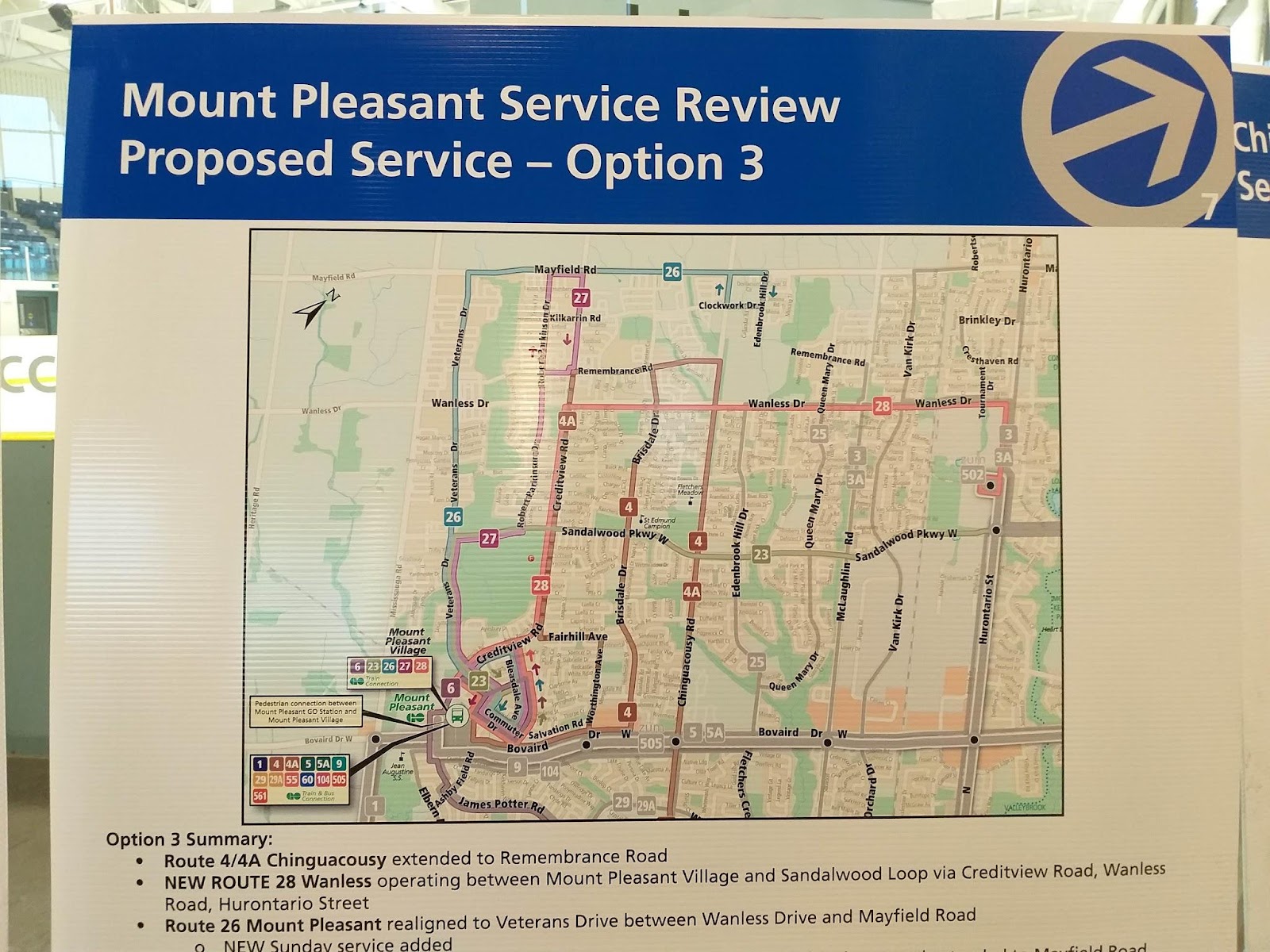 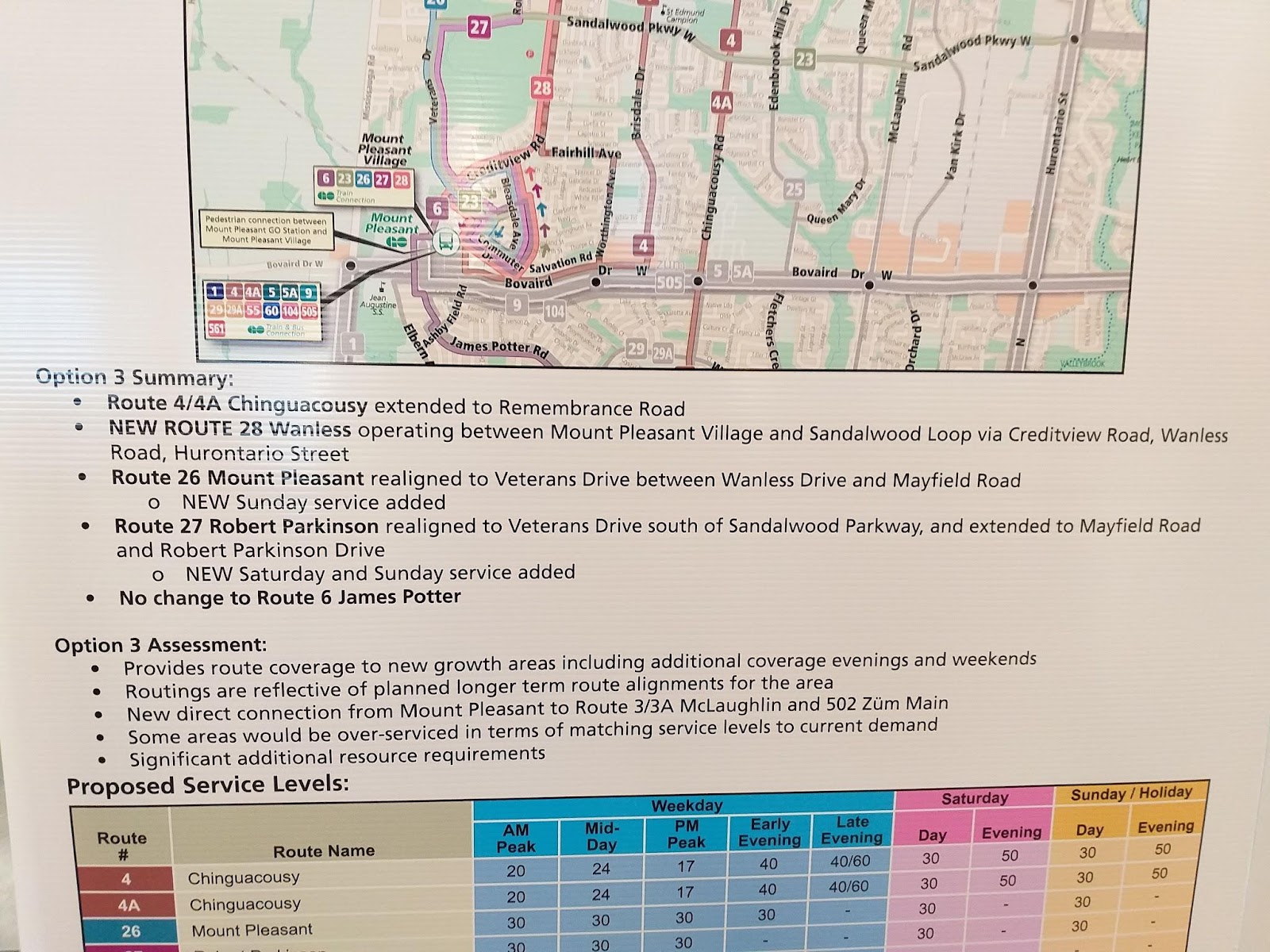 There is also a service review for the Chinguacousy Road Corridor. 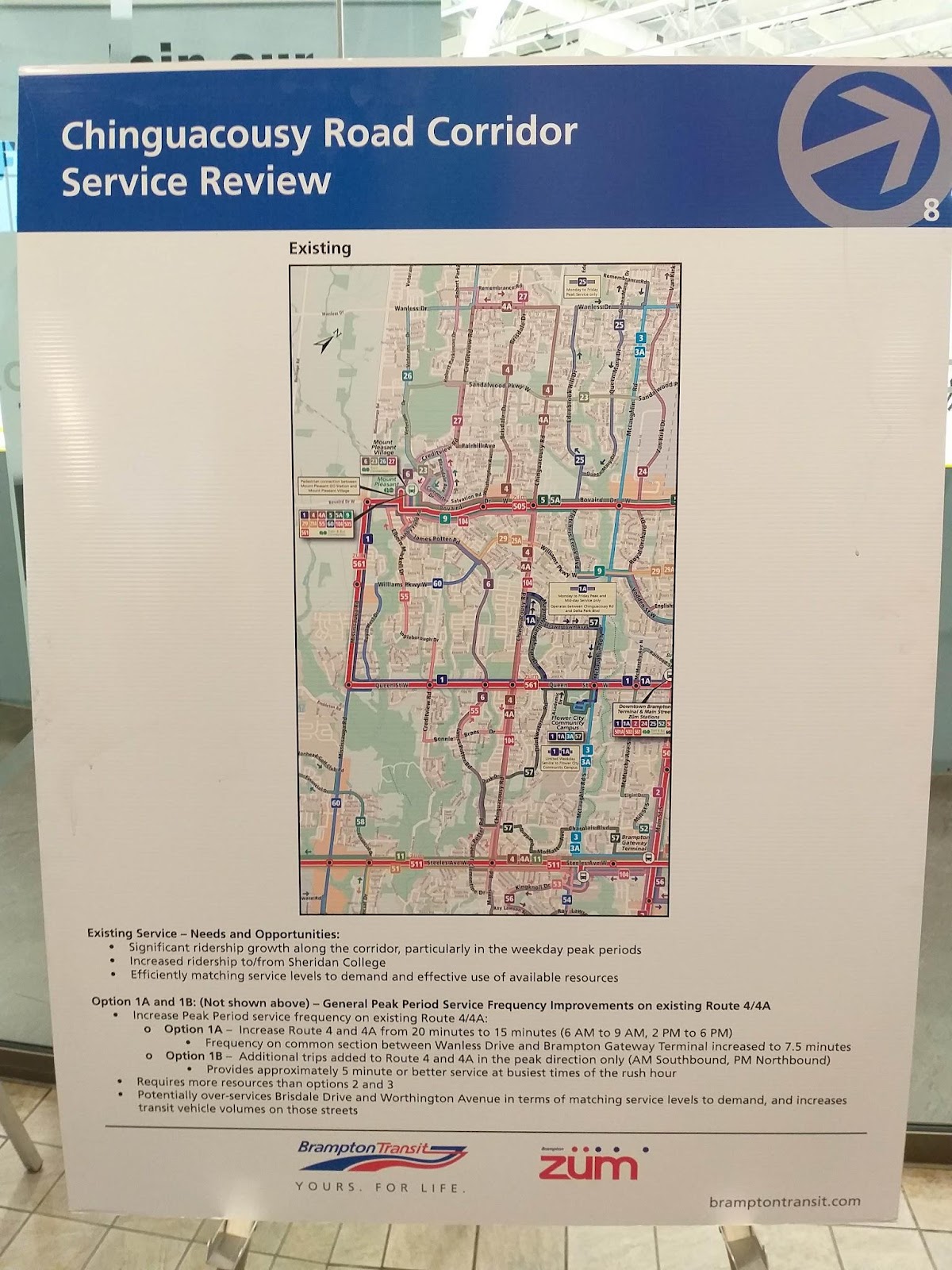 The city noted that there is significant ridership growth along the corridor, particularly during weekday peak periods and increased ridership from Sheridan College. There is a need to match efficiently service levels to demand and use of available resources.

Option 1 for the Chinguacousy Corridor is service frequency improvements on the existing Route 4 and 4A. 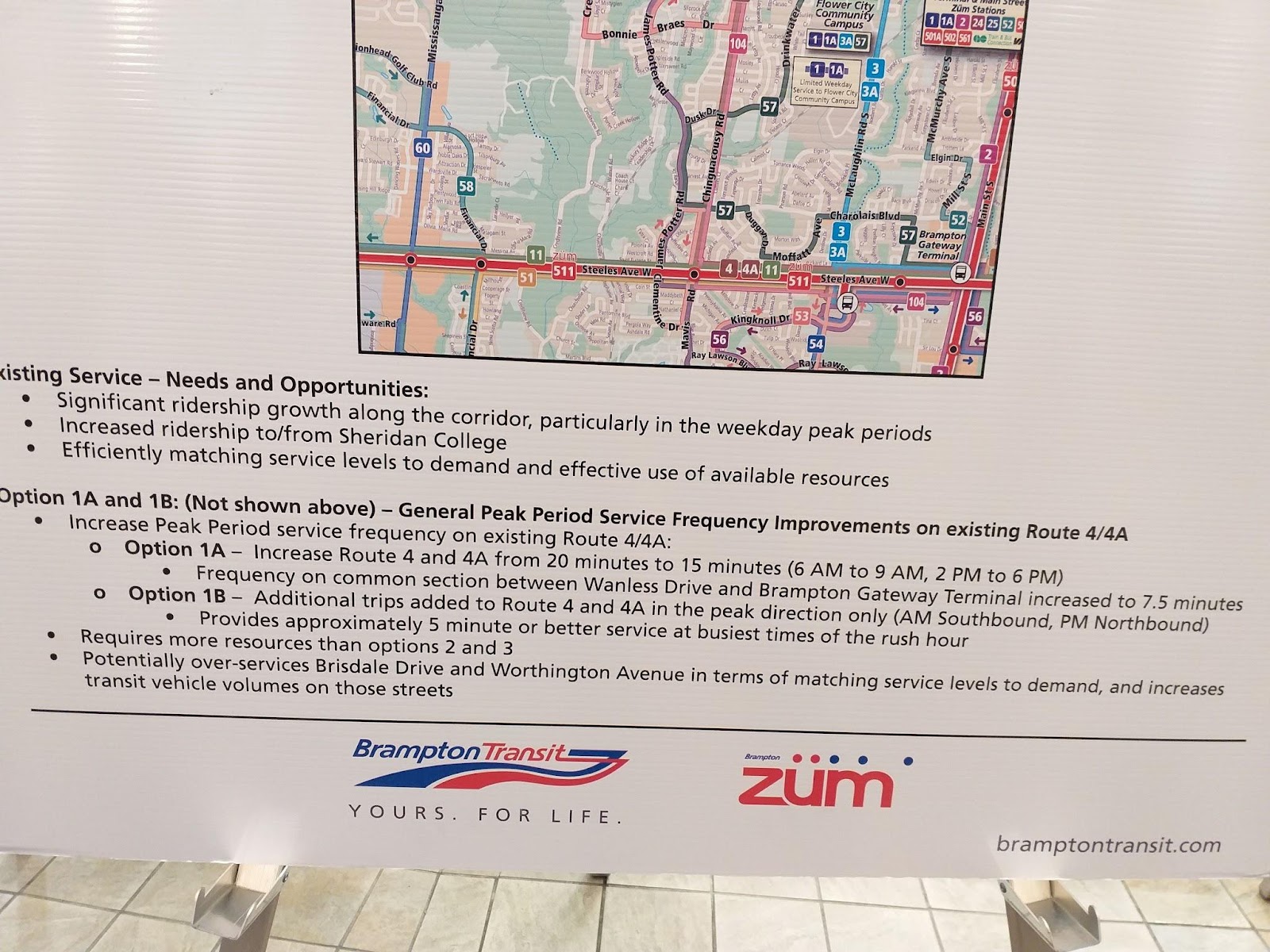 There are also Options 2 and 3 for Chinguacousy as well. 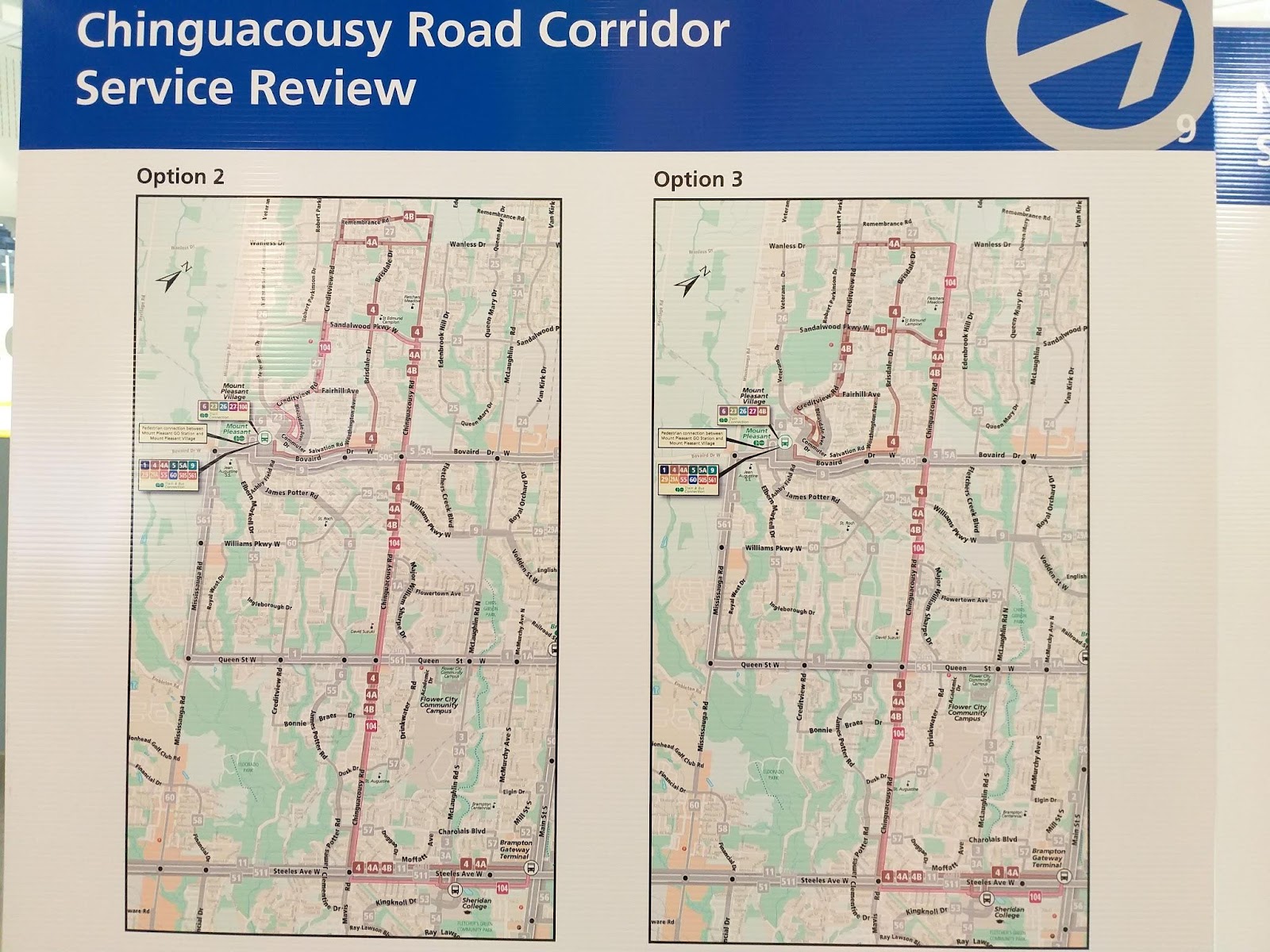 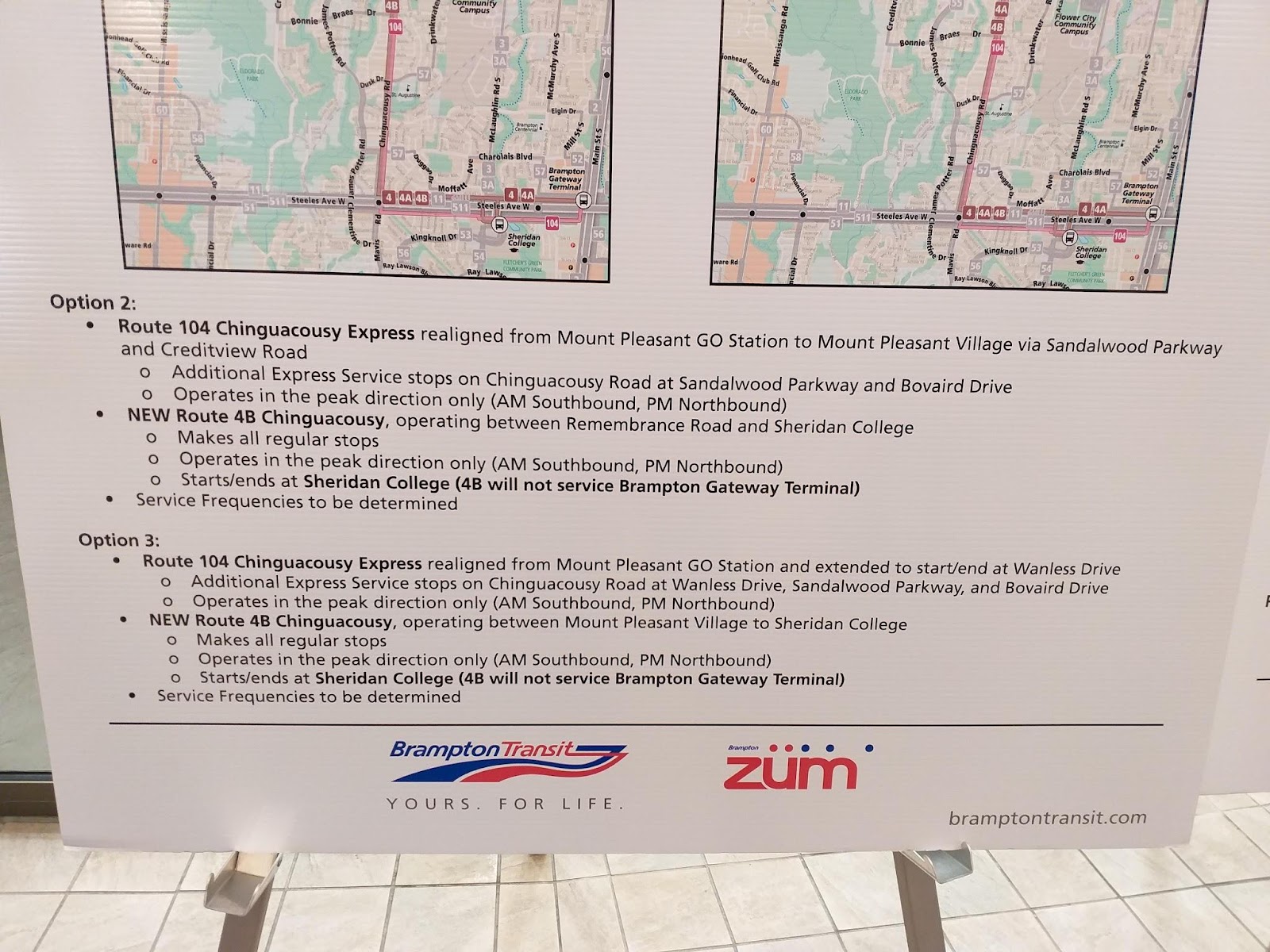 Option 3 would realign Route 104 from Mount Pleasant GO station and extended to the start/end at Wanless Drive, with additional express stops on Chinguacousy, Wanless, Sandalwood and Bovaird.

The proposed new Route 48 would operate between Mount Pleasant Village to Sheridan College.

Other changes include routes along “new growth areas” along Martin Byrne Drive and a realignment on Route 36 Gardenbrooke. 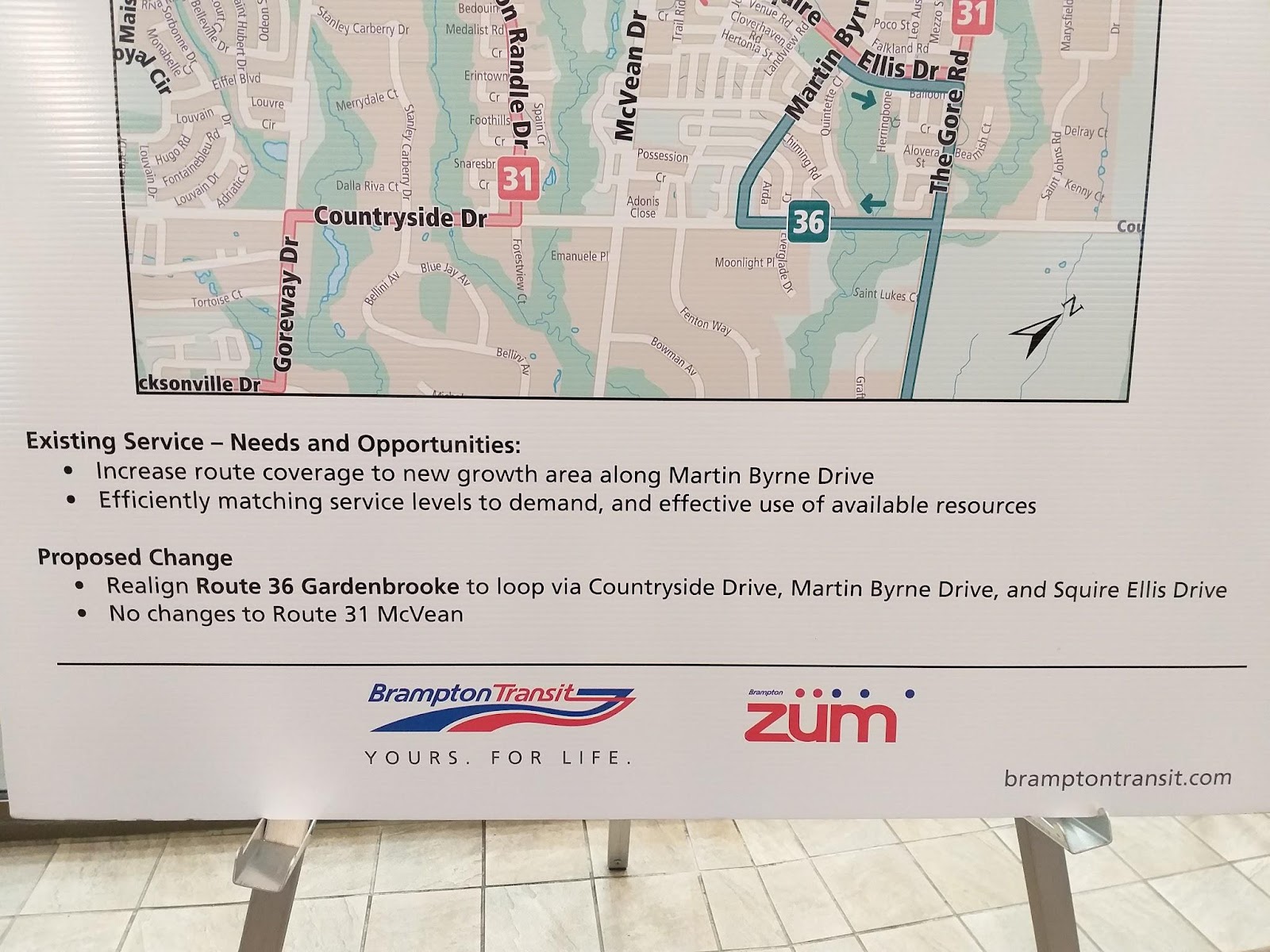 From the graph below, ridership on Brampton Transit has been exponentially increasing faster than the city’s population for the past decade. 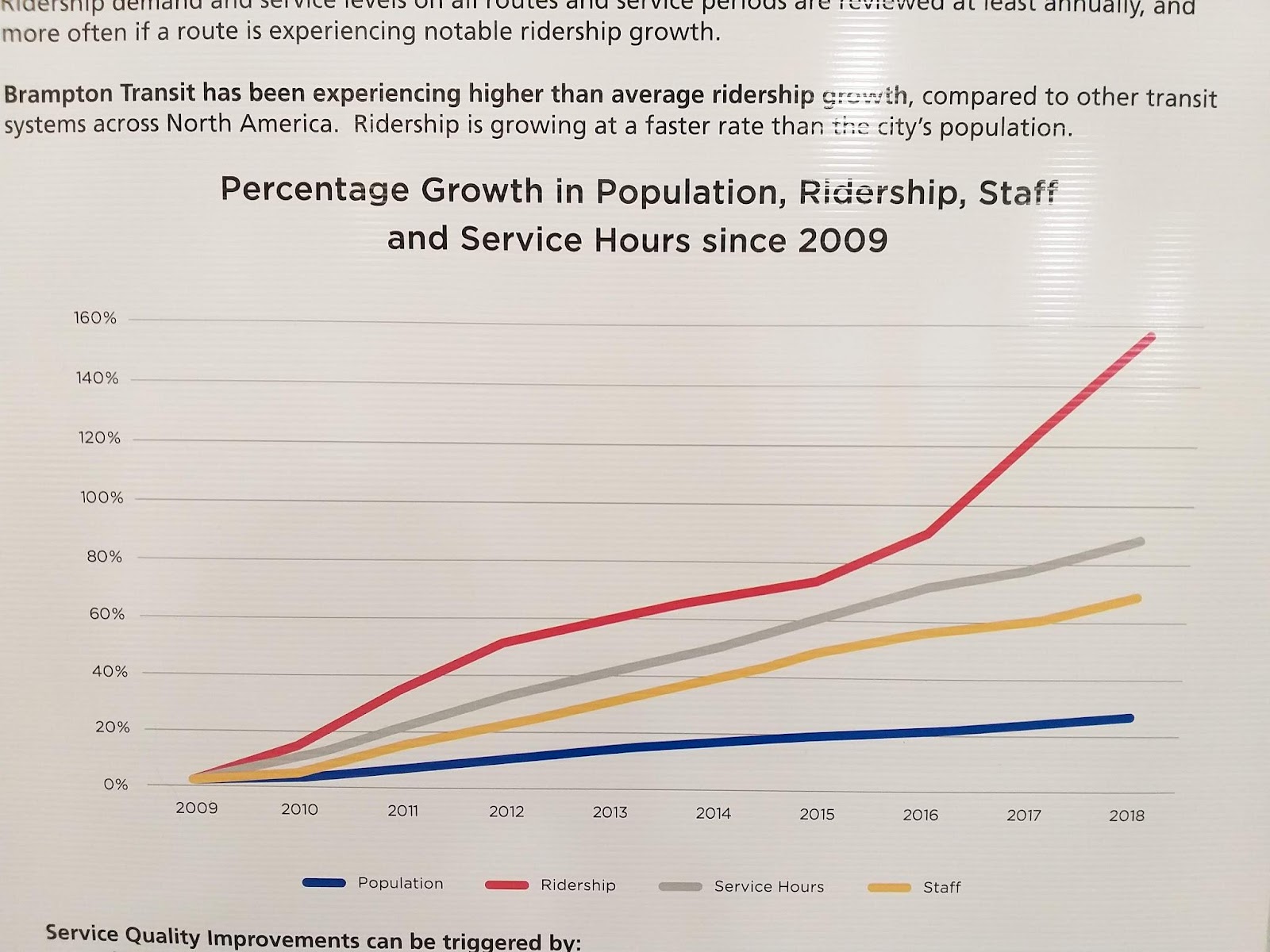 With that kind of ridership growth, increasing transit funding, revising existing bus routes and adding new ones was a no brainer.

What do you think of these proposed changes to transit in Brampton?