Mayor wants Brampton, Mississauga residents to be able to get a hair cut sooner than scheduled

The last couple of meetings insauga covered about the Peel District School Board (PDSB) were rather contentious in that they centred around issues of accommodating Friday prayers for Muslim students, featuring rambunctious hooligans shouting that Islam is un-Canadian or a man tearing up pages from the Qu’ran. It’s no wonder that these days, you’d have to present government issued identification to security prior to attending board meetings open to the public.

I was informed for a recent board meeting there was going to be quite a debate with back and forth verbal jousting going on. But in the end, there wasn’t any overarching issue of importance to the general public, and at times it came off as petty squabbling and I was hard pressed to figure out any relevance to it. The only relevance I could decipher was politics, pure and simple. 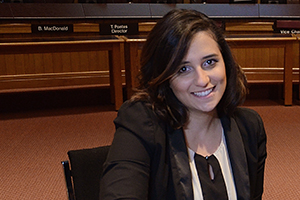 Insauga was advised by Mississauga Wards 9 & 10 PDSB Trustee Nokha Dakroub that she was introducing this motion at the board meeting on October 24:

“Whereas, currently at Regular Meetings of the Board, the speakers list and order is only visible to the Chair.

And whereas, the technology that is available will help to ensure transparency, equity and fairness at Board and Committee meetings.

Be it resolved that, going forward, using existing equipment, the speakers list be made visible to all members of the Board and Committee meetings, in private or confidential meetings and in information sessions.”

Dakroub said the current procedure is that Janet McDougald, the Chair of PDSB and a school trustee since 1988, is the only person during a board meeting who has the discretion to select which trustee can speak at any particular time. This list of trustees is only visible to the chair in public board meetings, but there is no list in committee meetings or any other meetings. 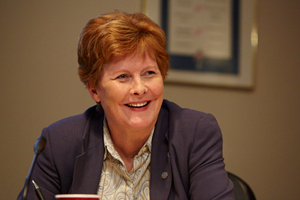 According to Dakroub, there are no rules that McDougald follows; it’s all “based on her mood that day,” and this is an attempt to establish some clear standard rules to follow. To Dakroub, having a trustee speakers list available to all trustees was a step forward in making the board more transparent and accountable.

Insauga reached out to Chair Janet McDougald for her comments and thoughts on Dakroub’s motion. McDougald responded back saying she had nothing to say until the Board made a decision. That decision took almost two hours and at times trustees seem more confused and insulted over the motion itself.

Trustee Brad MacDonald (Mississauga Wards 2 & 8) said this motion was ludicrous and it was wasting the board’s time on more important work; he cited the example of three mothers with children in Thomas Street Middle School who came to the board to ask for two more portables. Trustee Stan Cameron (Caledon) actually wanted to apologize to PDSB staff for seemingly wasting their time.

Chair McDougald was perhaps the most direct, temporarily ceding her position as chair to fellow trustee Suzanne Nurse so she could speak on the motion. McDougald said she would never support it, calling it an attack on her character and integrity, and saying that in her 19 years as chair no trustee has ever been denied the ability to speak or that she did not reveal the speakers list upon request. McDougald went on to say suggesting that she is not equitable is an affront to her, saying:

The trustees ended up voting to defeat Dakroub’s motion by a vote of 9-3 in a recorded vote. Voting in favour for Dakroub’s motion was Dakroub herself, Trustees Harkirat Singh, Kathy McDonald, and the two student trustees (whose votes were non-binding), and voting to defeat the motion was everyone else (McDougald, Brad MacDonald, Cameron, Carrie Andrews, Robert Crocker, Sue Lawton, Nurse, and Rick Williams). Trustee David Green from Brampton was absent for this meeting.

I understand Dakroub’s intent was to just make the list of trustees speaking during board and committee available to all the trustees and not just the chair, but there were some amendments when introduced that, in my humble opinion, clouded the original intention and made things rather confusing.

For example, there was an amendment to an amendment about the proper insertion of the words “and/or” in the amendment to the motion, and debate over how the list was to be made available (whether it should be a written list, or an electronic copy on a laptop that the chairing trustee brings to a meeting). No wonder some trustees seemed rather confused.

In the end, it wouldn’t hurt to have this list made available to all trustees, and the technology to keep one around (if they don’t want to maintain a paper copy) shouldn’t be hard to figure out for more tech savvy individuals. But I can’t help think that this came off as simply an attempt to politically agitate McDougald, who has been a trustee since 1988 and chair of the PDSB for almost 2 decades and counting.

Perhaps she sees this as an affront not only to her integrity and character, but an attempt to erode some of her power and authority. I’ve been to enough PDSB meetings to see that McDougald has, shall we say, a rather firm hand over the procedures. It is as though she does exercise a degree of control over who gets to speak and when, which may be standard practice for chairing a meeting.

But as you can see from the video, her tone is rather authoritative to the point of being a bit overbearing; it’s almost as if she is talking down at grown men and women like they were children. Maybe after 19 years as chairperson, one believes their way is the highway and is the only way that things should be done.

But as Dakroub said during the board meeting, her motion was to prepare the board for the next 10 to 50 years ahead in updating their procedures, when they were not all necessarily going to be trustees anymore. Even that sounds like a threat, at least to a long serving incumbent. Maybe that’s why McDougald got so upset.

Photos courtesy of the PDSB