Never let it be said that making enough noise to a ruling government cannot result in change.

Metrolinx announced that, after weeks of commuter chaos at Union Station where riders couldn’t even get onto the platform on their way back to Brampton, the express train at 4:50 pm will return, running from Union Station to Bramalea GO Station, and then serve all stops until reaching Kitchener.

In order to offer this service, a new train will be running. This will provide more than 1,000 more seats during the afternoon commute. This service will come into effect on Feb. 13.

Brampton mayor Patrick Brown, who visited the train stations around Brampton and was imploring the province to restore the express train service, said he was pleased that the service was being restored.

“We thank Minister (Jeff) Yurek, Minister of Transportation, for listening to us and addressing this concern. We have to continue working together to get the service that our residents deserve. The extension of Two-Way All-Day GO Rail service to Kitchener-Waterloo needs to be expedited to stimulate economic growth and development in Ontario that includes high-tech jobs, financial services, and research and development industries along Canada’s Innovation Super Corridor,” Brown said in a statement.

The issues began on January 7, when travellers were introduced to an additional GO train service every weekday morning and afternoon, with a new trip option for customers in Kitchener, Guelph and Acton.

As a result of this change, a morning trip that used to start at Georgetown GO Station would now begin at Kitchener GO Station at 5:40 am., stopping at Guelph and Acton GO stations before continuing to serve all stops to Union Station, arriving at 7:43 am.

But that meant more people were getting on the train by the time it reached Brampton, which resulted in little to no room for the city’s commuters to sit down, let alone stand up. Social media videos of extremely crowded train platforms at Union Station that looked more like commuters from Mumbai or Tokyo began to circulate….and the NDP were quick to remind people of that.

“(The PC government’s) cancellation of the 4:50 p.m. express train, and the removal of carriages from trains that were already packed, threw the line into chaos with dangerous overcrowding and delay after delay. Rather than do the right thing and immediately reverse course, Conservative transportation minister Yurek dismissed these concerns from us and commuters as a ‘publicity stunt’,” the Official Opposition said in a statement.

“While the reintroduction of the 4:50 p.m. express train is a step in the right direction, it is not a plan for two-way, all-day GO service along the full length of the Kitchener line”.

You can tell that the government was scrambling a bit to do damage control culminating in the decision to bring back the express train. Yurek tweeted out the Metrolinx announcement video, thanking the PC MPPs in Kitchener and Brampton. 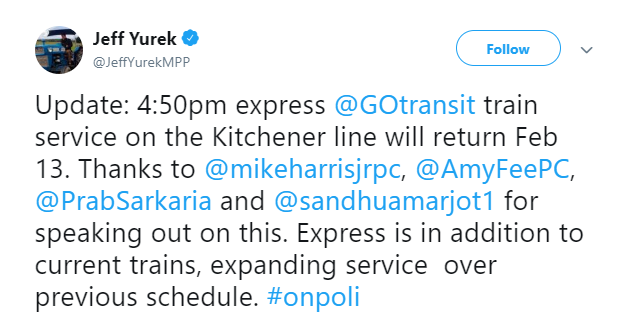 PC MPP Prabmeet Sakaria was sent out to the Bramalea GO station to highlight the announcement.

I am proud to announce that @Metrolinx will bring back 4:50pm express train starting February 13th!

The express is in addition to the current schedule, which means one more train on the line and expanded service! #onpoli #brampoli pic.twitter.com/HO1btkGdYy

So it seems that somebody blinked in this case.

While Metrolinx is supposed to run and conduct the daily operations of the GO transit system, major decisions such as adding or removing services are made by the province, so the idea to remove the express train falls squarely on the shoulders of the Ontario government.

It can’t be helped that this was seen as another example of the Ford government putting the proverbial screws to the Brampton and Patrick Brown. But unlike the university cancellation and announcements about hospital funding outside of Brampton, the express train cancellation was concrete and people could feel its negative impact immediately.

No wonder the government reversed their initial decision; messing with GO train riders commutes is a surefire way to lose votes in the next election.

Considering that Doug Ford is already putting together his re-election team for the 2022 provincial election, it’s not far fetched to say that electoral calculus will be factored into this provincial government’s decision making process going forward.