Police are hoping to identify a suspect following a bank robbery in Brampton.

Peel police say that on Wednesday, August 22, 2018 at approximately 9:16 a.m., the suspect allegedly entered a TD branch in north Brampton and approached a 64 year-old Brampton man who was making a cash deposit.

Police allege that the suspect put the victim in a head lock and held a gun to his head, demanding money.

Police say the victim agreed to the demands and was not injured.

The suspect reportedly fled the bank on foot.

Police also allege that on Wednesday, August 22, 2018 at approximately 10:02 a.m., the suspect entered an RBC branch in north Brampton and, after speaking to a bank teller about opening a new account, retrieved a black handgun and demanded money.

Police say the suspect then grabbed a 50 year-old Toronto man around the neck and pointed the handgun at him, demanding more money.

The teller complied and the suspect fled the bank on foot.

No injuries were reported in connection with the incident.

Police say the suspect is described as a 6’ tall black male between 25-30 years of age. He has a thin build, a thick black beard, black matted hair and pierced ears. 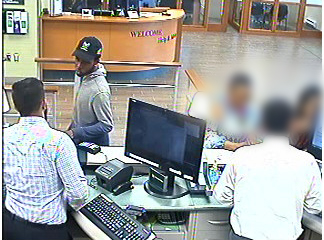 The suspect also spoke with a heavy accent.

Anyone with information regarding this incident is asked to contact investigators with the Central Robbery Bureau at (905)453-2121 ext. 3410.