Arrest made in connection to 2014 sexual assault in Brampton

Police are appealing to the public for help in locating two suspects of an armed robbery that took place in Brampton.

The incident happened around 3:30 a.m. on Sunday, November 5, 2017 at a convenience store on Queen Street East and Centre Street North.

Two suspects, one male and one female, reportedly entered the store at that time. The male approached the cashier with a firearm and demanded cash, while the female took a large quantity of cigarettes from the counter, police say.

The suspects allegedly fled the scene with cash and cigarettes. The cashier, a 23 year old Mississauga man, was unhurt.

The female suspect is described as white, 21-22 years old, with a thin build. She was wearing a grey hoodie with the hood up underneath a red sweatshirt, grey track pants with white writing on the right hip, black shoes, and a black ski mask covering her face. 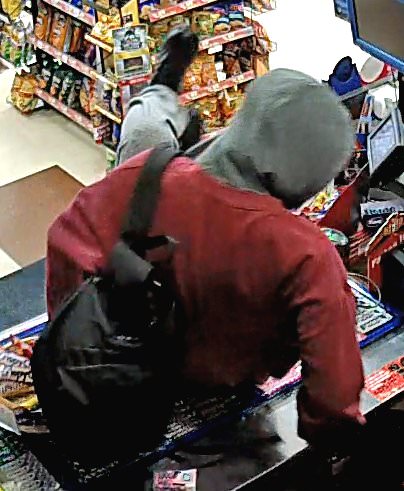 The male suspect was reportedly armed with a black handgun. He is described as white, 24-25 years old, thin build and approximately six feet tall. He was wearing a zippered hoodie with the hood up, black hat, black Adidas track pants with blue stripes, and a black scarf covering his face.

Information may also be left anonymously by calling Peel Crime Stoppers at 1-800-222-TIPS (8477), by visiting www.peelcrimestoppers.ca, or by sending a text message to CRIMES (274637) with the word “PEEL” and then your tip.