It may have taken over a year, but it’s finally happened: Brampton Mayor Patrick Brown has received a face to face meeting with Ontario Premier Doug Ford.

Ford was at Peel Regional Police headquarters on Friday, January 24, announcing a $20.5 million investment to Peel police to provide officers with resources to increase community policing, combat gun and gang violence, and to enhance public safety.

Had a productive meeting this morning with @fordnation on some of Brampton’s pressing needs.

In the discussions with Ford, Solicitor General Sylvia Jones and Attorney General Doug Downey, Brown said they talked about the recent declaration of a healthcare emergency, crime, installation of CCTV cameras on the 401 and 403 and judicial resources for the provincial courthouse located in Brampton.

There was no additional discussion about post secondary education such as the city’s initiative known as Brampton U, as confirmed by Brown’s office.

“Gangs don’t respect postal codes; it is a GTA-wide problem. We can never underestimate the sophistication of criminal organizations who know full well which regions have more diminished response capabilities. I am grateful that Premier Ford and Solicitor General Jones have heard our call for guns and gang funding. This is an important tool that our police need to keep Brampton and Peel Region safe,” Brown said.

“It was a positive and constructive meeting. The Premier was happy to have the chance to sit down with Mayor Brown before the announcement this morning to discuss how our governments can continue working together to best serve the people of Brampton,” Ford spokesperson Ivana Yelich said in an email to inbrampton.com.

While there were smiles all around, the politically ironic optics of the photo did not go unnoticed:

Inbrampton.com noted in an earlier article that for over a year, Brown had not managed to have a face to face meeting with his successor as PC leader since he became mayor in order to discuss important issues pertaining to Canada’s ninth largest city, despite Ford meeting with several other mayors from smaller municipalities, as well as Mississauga Mayor Bonnie Crombie.

Brown himself took to commenting on the article when it was posted to our Facebook page. 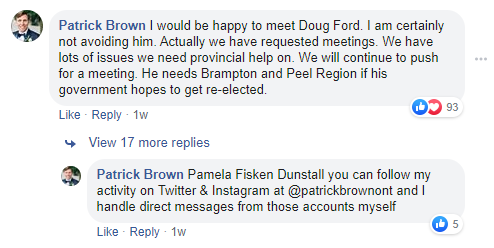 He also had to dispel some misconceptions about the city having any jurisdiction over increasing auto insurance rates.

During a press conference after the police funding announcement, Ford said “we have $27 billion over the next 10 years of building new hospitals (across the province). Yes, we will support a hospital in Brampton.”

For his part, Brown said he took Ford’s words as “very encouraging,” and said “I recognize the fact that the crisis we’re in wasn’t created in a year. This has been a crisis over the last 15 to 20 years. The fact that we’re at the table talking to the premier directly about it when only 2 days ago, we had our physicians and patients come forward with a plea for help.”

“The fact that we’re at the table so quickly is encouraging.”

Time will tell if these positive words translate into concrete action.

Cover photo courtesy of the City of Brampton