The issue of developments always seem to have its pros and cons no matter which city it affects, with a good chunk of people living there always having problems with them.

People need places to live, yet those interests often clash with those already living in a highly urbanized environment where concerns over traffic safety and view of sunlight get raised often…especially with an older generation.

Brampton is slated to take in a majority of the population growth in Peel Region in the coming years, and coupling with the city’s need to revise their official plan along the lines of Vision 2040, no wonder developments are being proposed for Brampton.

One such development application that came forward this past week at the city’s planning committee meeting on November 19 are two condo towers near the Bramalea City Centre, specifically at 2 and 4 Hanover Road, just off the intersection of Dixie Road and Queen Street East. 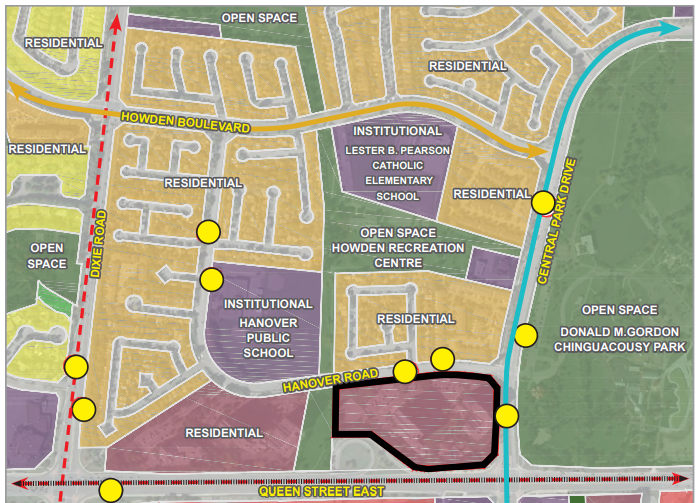 As you can see, the area is surrounded by Chinguacousy Park on the east side, the Howden Recreation Centre and Public School, Catholic School and a number of residential neighbourhoods. Bramalea City Centre is south of Queen Street.

On the site itself, there are two existing buildings there are 18 and 22 storeys in height, which is the allowed height that area is zoned for.

The application from the developer requests an amendment to the zoning bylaw to permit the building of two additional buildings at 12 and 26 storeys. Here’s the artistic rendition of what those buildings would look like. It’s the one on the far left and the one in the foreground. 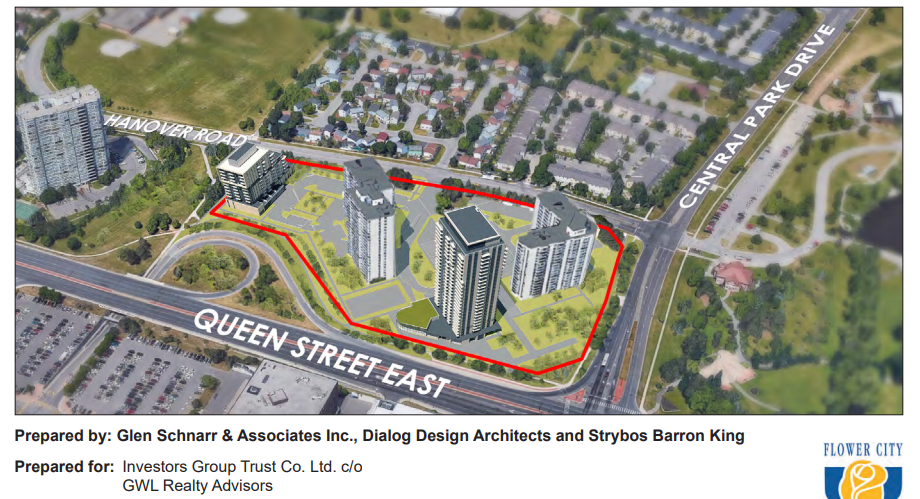 Here’s the rendition of the proposed landscape. The new buildings are shown in the darker colour: 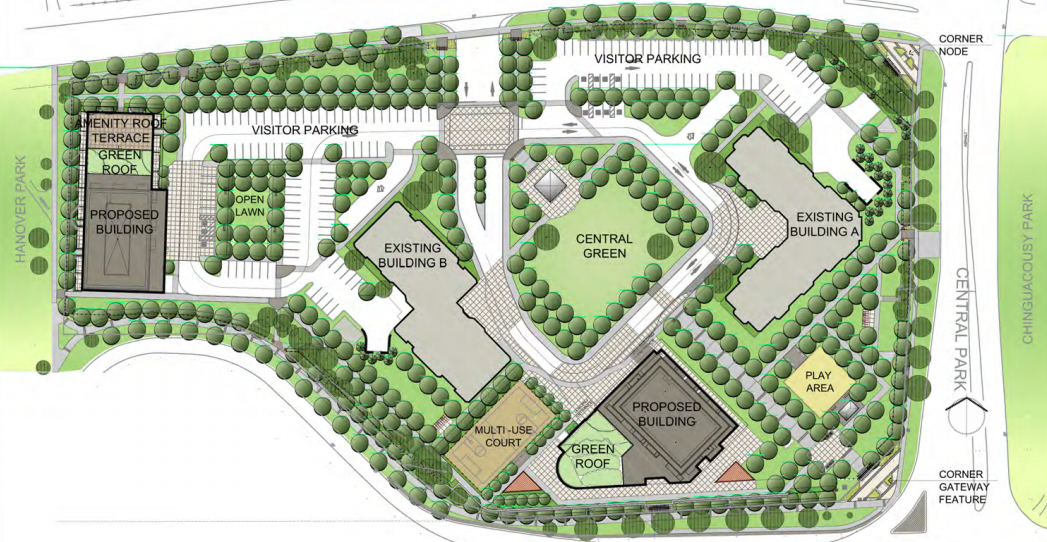 The proposed buildings will comprise of an additional 384 units, with the total number of units proposed on the property being 989, which translates to approximately 247 units per hectare. 1159 parking spaces are being proposed as well, with one access point from Hanover Road. 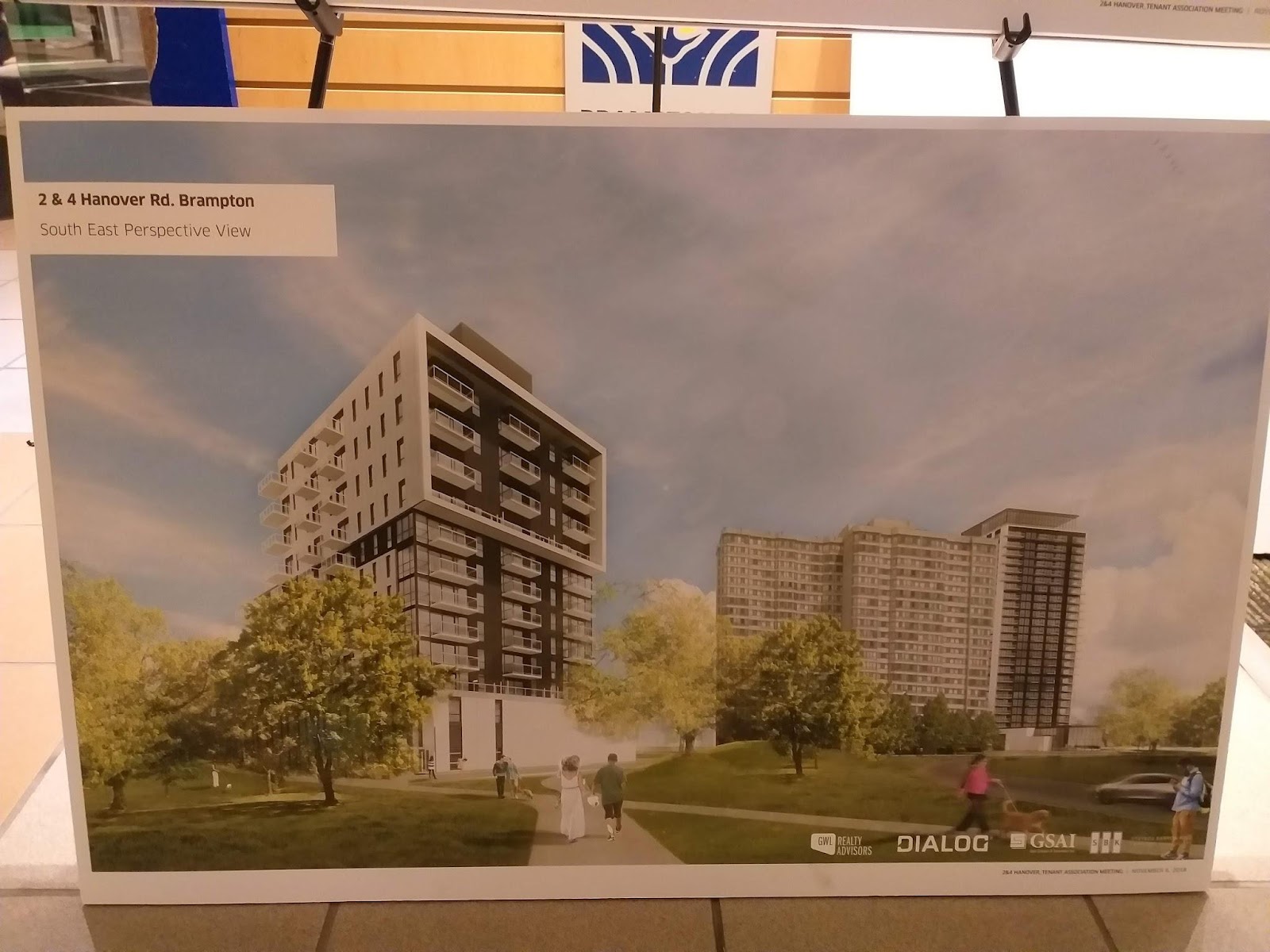 A number of reports and studies had been done by the applicant, such as the traffic impact and shadow impact studies. Here’s the shadow study as of March 2018. 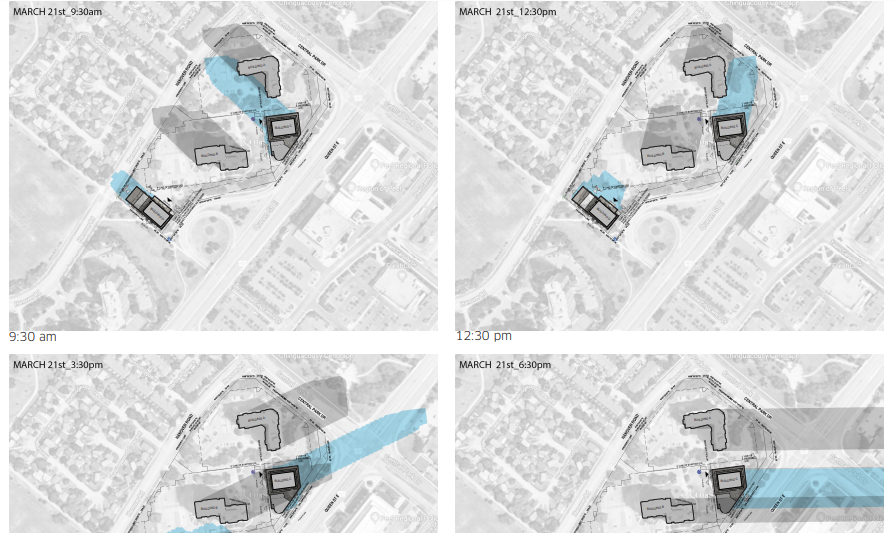 And in the traffic impact study, the applicant concluded that:

The planning meeting moved onto public questions and comments, and suffice it to say there was plenty of it.

A resident named Richard challenged the results of the shadow impact study, saying it was done for only a few hours during a day and doesn’t take into account the effects on the well being of the people living in the area.

Densification also came up as an issue. Not necessarily against having it, but having it too quickly. “Intensification along Queen Street doesn’t mean it has to occur at the same time,” was one comment made, along with how increased traffic and density would affect safety of nearby children.

However one Brampton resident, who locally covers planning issues under the moniker ‘Brampton recorder’ said that with the city having a low vacancy rate (less than 1 per cent), people “actually needed places to live.” He also pointed out that nearby amenities, such as the BCC, the park, transit services made this intersection a viable site for new development.

A woman echoed those sentiments, saying that there was a lot of wasted land that was not being maintained anyway so they might as well find something to do with it, trusting crossing guards to keep the kids safe.

Councillor Pat Fortini, who represents the area, said he was told that the building would only be 22 storeys and also all three buildings were supposed to be interconnected with each other. The answer from the planning staff was that was the reason why a zoning bylaw amendment was needed to allow the 26 storey building.

It’s important to remember that this is only the statutory first meeting on this development application, so no final decisions have yet been made.

But this area already has a number of condominiums in the vicinity and the BCC already causes traffic issues at peak periods. Perhaps the main thing people should focus on is the height which they say causes the shadow impacts and see if there is a compromise that can be reached between 22 and 26 storeys.

What do you think of these new condos being proposed in Brampton?