Important Information for Anyone Running for the Municipal Election in Brampton

Recently there were two information sessions held by the Ministry of Municipal Affairs (MOMA), one at Peel Region headquarters in Brampton and the other at Mississauga City Hall.

They were held jointly with Peel Region officials and City of Mississauga officials in order to provide information about changes to the Municipal Elections Act for people interested in running as candidates, as well as third party advertisers, during the upcoming municipal election campaign.

The Regional session was attended by more people from the Town of Caledon than from the other two cities, although former mayoral candidate and Brampton councillor John Sanderson was in attendance (Sanderson vied for the Regional Chair position in 2014 when it was still up for appointment, which went to then Mississauga councillor Frank Dale).

Caledon decided not to host their own session with MOMA hence the piggybacking off of the Peel Region session; regional councillor Barb Shaughnessy from Caledon was in attendance. At Mississauga, residents who attended included former Ward 4 candidate Joe Horneck, former Ward 5 candidate Herman Hacikyan, resident Andrew Gassmann (who is expected to contest Ward 7) and incumbent Ward 3 councillor Chris Fonseca.

Here are some interesting facts about becoming a candidate either for Regional Chair, or to run for mayor or city councillor.

Who is NOT eligible to stand as a candidate for municipal election? 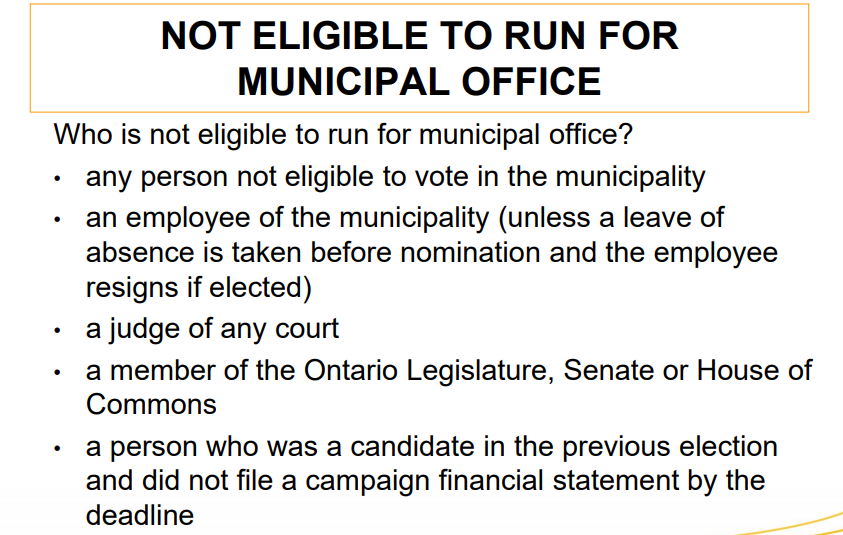 To be a candidate or a voter, you have to be 18 or older, be a Canadian citizen, and a resident or a non-resident owner of property or tenant (or a spouse of) the latter in the municipality.

As stated, city employees are ineligible to run unless they took a leave of absence before filing their nomination. What should be clarified is that while members of the provincial legislature, House of Commons and Senate were not eligible, such individuals would become eligible should they resign their office before filing a nomination.

However, this does not work the other way around. Municipal politicians who aspire to higher office do not have such restrictions; they can remain in office until the election (when they see if they get elected or not), and if not they return to their place on council and can run for another term if they so choose.

Also, candidates who failed to file their financial statements on time from the last election will not be allowed to run in 2018.

Twenty-five signatures are required to run for municipal office

One of the new requirements is that you need the signatures of 25 people in the municipality you are running in in order to file your nomination as a candidate.

These persons endorsing a nomination must be eligible to vote in an election for an office within the municipality if a regular elections was held on the day that the person endorses the nomination. These individuals may endorse more than one nomination, and the city clerk is entitled to rely upon the information filed by the candidate.

However, one interesting caveat is that, should you as a candidate decide to run for another position in the same municipal election… 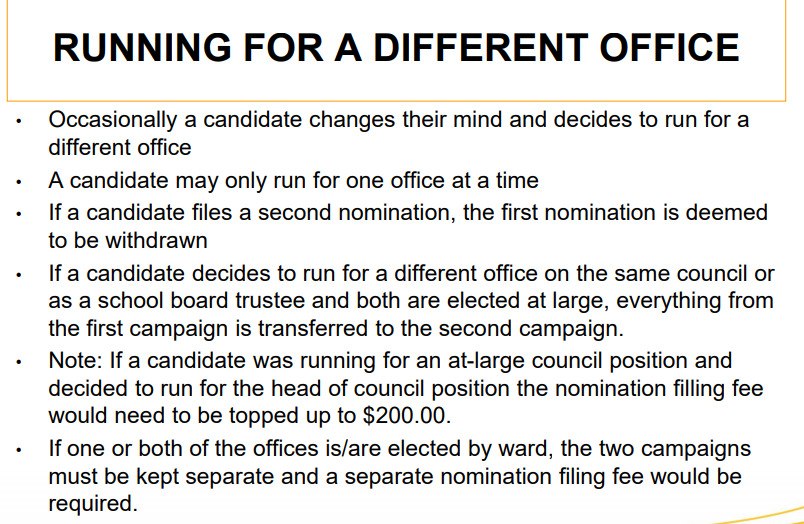 So if you are running for councillor in one ward but decide before July 27 (the deadline to file as a candidate) you had better chances in another, the signatures of the 25 people that endorsed you running can still be used for the new ward you’re running in.

How many people running as candidates will we see decide midway to run for something else? But speaking of that caveat, this brings me to the next interesting point… 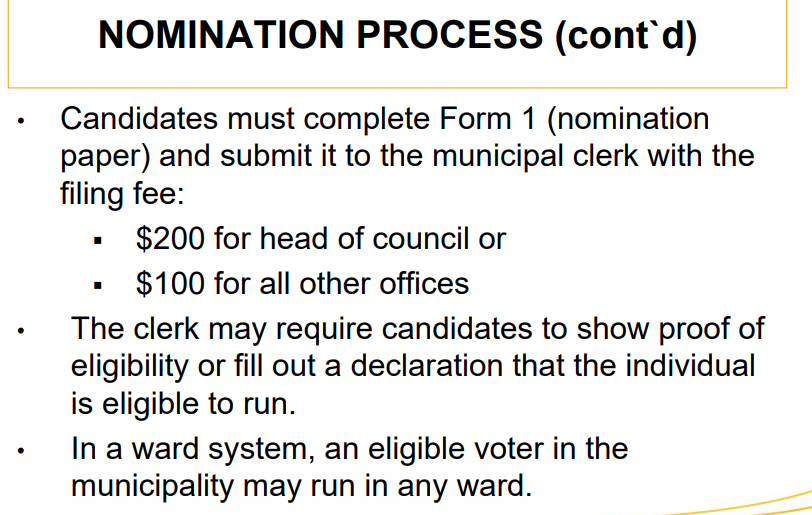 I wonder how many candidates we will see in the municipal election that are from other parts of the city, running in areas where they do not have a natural or established connection to that community?

Voter Lists rules may give unfair advantage to incumbents

The preliminary list of electors becomes the voters list and will be made available to all candidates on September 1. 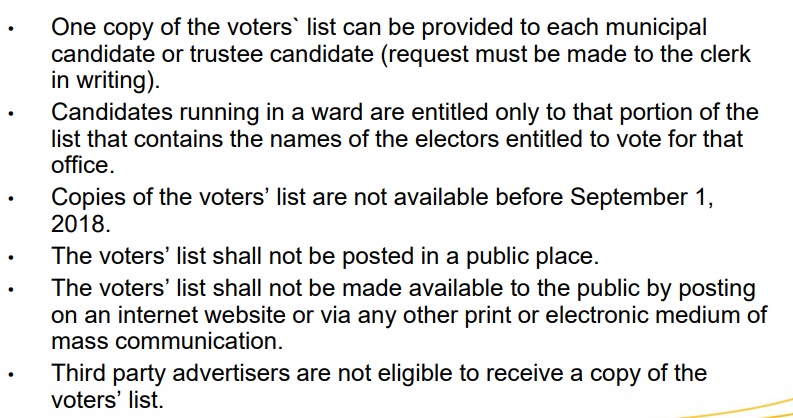 You may notice that it says “copies of the voters’ list are not available before September 1.” That may work out all well and good if there was an open seat and all the candidates were first time candidates. But what about people who ran before, and incumbents, who may have a voters list from a previous election?

This question was raised by a Caledon resident during the Region of Peel session and by myself when I attendee the Mississauga session. In both instances, the MOMA officials could only state that candidates should not be using a list from the last municipal election, but there really was no enforcement mechanism to prevent that from happening.

Mississauga officials said for an incumbent councillor, if the list was stored on a city server then that is in effect city property. But what if that councillor had a copy of the list stored on a home computer, or a Christmas card list? One aspiring candidate told me after the Mississauga session that during the 2014 election, someone was coming around in mid July asking him if he could count on his vote.

Without any way to properly enforce this rule, we are basically relying on honest and good faith from candidates with lists not to exercise that advantage.

What happens in the event there is a tie?

Many elections have seen races decided by a narrow margin of votes, but a tie rarely happens. However, when it does there are some really strange rules on how that tie is broken to determine a winner: 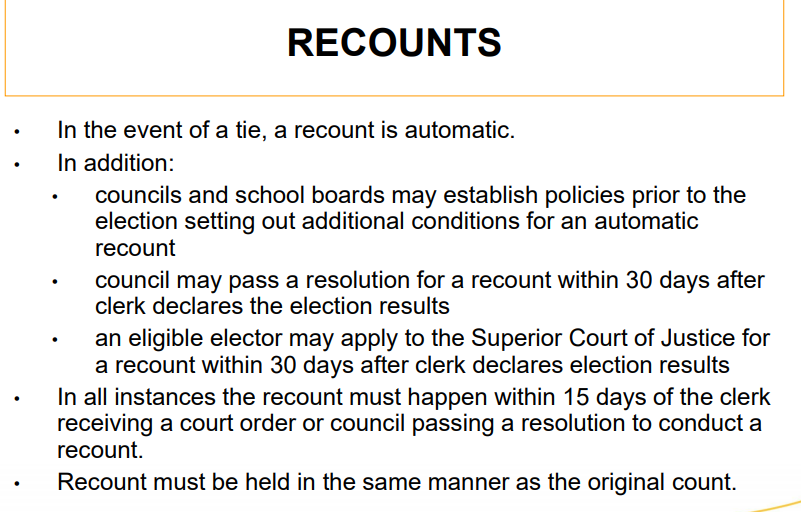 I asked what happens if the recount also results in a tie. After all, you can’t have two winners in an election.

The Municipal Elections Act states that, in the event of a tie after a recount, “the lot shall be conducted by placing the names of the candidates on equal size pieces of paper in a box, and the name drawn by the recount officer shall be the successful candidate.”

It might seem strangely undemocratic (indeed, one Twitter user asked if that was “seriously” what the rule was), but if it happens in the fall elections in Peel, it won’t be the first time a tie in an election was broken in this manner.

Last November, a Virginia state house seat resulting in a tie between the Republican and Democratic candidate was broken by a drawing of one of their names from a canister. Closer to home, a legislative seat in PEI that ended in a tie after the 2015 provincial election was decided by a coin toss.

The entire presentation can be read here, and more information can be found on the MOMA website. It looks like if you’re interested in becoming a municipal election candidate, you have a lot of reading to catch up on.

Municipal candidates can register from May 1 to July 27 at 2 pm, and elections take place on October 22.