Despite saying through a spokesperson that he is ‘looking forward to working with all municipal leaders, including Patrick Brown,’ Doug Ford’s relationship with the incoming new Brampton mayor is still murky at best.

Ford cancelled a Peel regional chair election that Brown was contesting soon after he became Ontario’s premier, which prompted Brown to enter the mayoral race. One day after Brown won that election, Ford’s government announced that they are cancelling the much vaunted Ryerson university funding for Brampton. 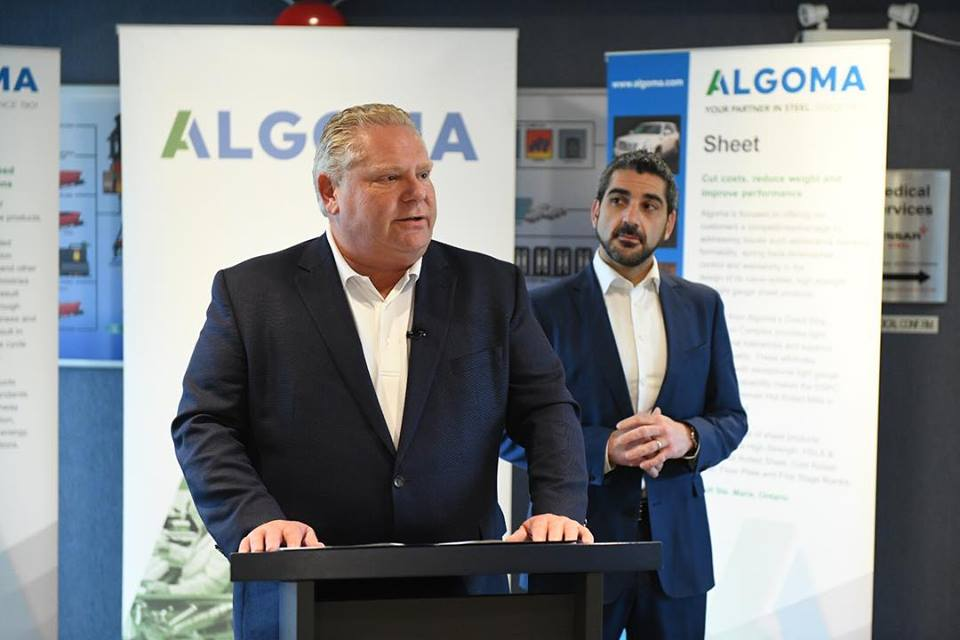 Now it seems more recent moves that the premier is making are not only coming off as more examples of exacting so-called “payback” against the former PC leader, but it’s costing the province as well.

According to this story from the Globe and Mail, Alykhan Velshi, who was Brown’s former chief of staff, was fired from his role as a vice president at Ontario Power Generation one day after starting with the company. What’s more is that this decision was allegedly made at the behest of Dean French, one of Premier Ford’s top staffers at Queen’s Park. 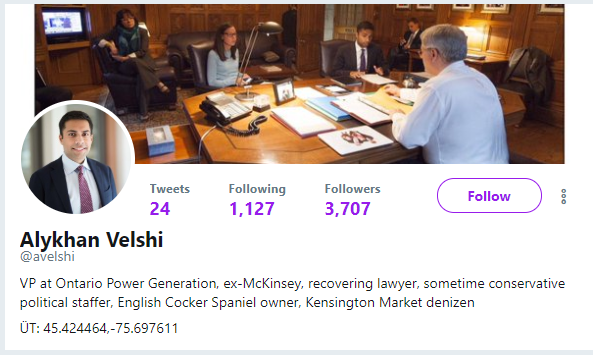 As of now, Velshi’s Twitter profile (see above picture) still lists him employed with OPG.

The OPG kept Velshi on as VP of corporate affairs and community relations until his termination formally takes effect (Velshi was hired back in September), instead of immediately terminating him. However, that date is not yet known, nor what the amount of severance Velshi is likely entitled to upon the firing.

Now, there are two takeaways from this story and how it affects Brampton.

For those of you who are Ford fans, you might be inclined to continue giving the Conservative premier a pass because you’re under the perception that he is “cleaning house” of Liberal appointees or Brown leftovers. But although Velshi is indeed a former staffer for Patrick Brown, his own Conservative credentials run much deeper than his relationship with Brampton’s new mayor.

Before associating with Brown, Velshi, trained as a lawyer, worked for former federal Immigration Minister Jason Kenney (who is seen as the next likely Conservative premier of Alberta come next year) as well as former prime minister Stephen Harper.

So this notion of Ford conducting some kind of anti-Liberal purge doesn’t hold much water. This is not some closeted Liberal we are talking about, so this move is more akin to an example of an internal Tory party struggle between Ford’s side and what remains of Patrick Brown’s side in the party.

The other caveat of note is that OPG is supposed to have an arms length relationship with the provincial government no matter which party is in power. It is almost unheard of that the OPG makes operation decisions based on what a political operative (the aforementioned Mr. French) is telling them. But then again, Ontario is currently in the midst of an ‘unprecedented time’ in provincial politics with a premier making unpredictable decisions.

If Ford saw fit to cut the rungs out from under his predecessor in the midst of a municipal election, then cancel funding for a major infrastructure / education project in Brampton just one day after Brown was elected mayor, the firing of one of Brown’s former operatives from a high paying job at Ontario Power Generation seems like small potatoes.

How many more intriguing decisions will the Ford government make that ties back to Brampton’s mayor-elect?