Recently, a lot of criticism was heaped upon the Ford government (as if there wasn’t enough of that going around already) over the cancellation of certain government oversight offices.

The PC government announced in their Fall Economic Statement that they were getting rid of positions such as the Environment Commissioner, Office of the Provincial Advocate for Children and Youth and the provincial French Languages Commissioner. Their functions would be lumped into the Ontario Ombudsman’s office.

In a subsequent press release this week, Minister of Children, Community and Social Services Lisa MacLeod announced certain changes on how to improve the child protection system in Ontario, pledging to seek out expert opinion from those who have lived experience in the fields of Indigenous child welfare, children-in-care, and youth-in-custody.

“Ontario’s most vulnerable children and youth deserve better outcomes,” said Lisa MacLeod, Minister of Children, Community and Social Services. “Our first step to making necessary improvements will be the establishment of advocacy tables which will have direct access to decision makers.”

MacLeod also announced the creation of three new roundtables dedicated to sharing ideas for improvement. Overseen by three chairs appointed by and reporting directly to her ministry. “We recognize that Ontario’s child protection and youth justice systems are struggling to provide the best outcomes for children and youth in care and custody,” said MacLeod.

The minister also confirmed the oversight responsibility for investigations related to Ontario’s children would transition to the Office of the Ontario Ombudsman, which didn’t sit well with a number of advocacy groups such as the Canadian Council of Child and Youth Advocates:

“It is not acceptable to eliminate the Ontario Child Advocate’s Office, and the individual advocacy support for vulnerable young people whose voices must continue to be heard. The independent Ontario Child Advocate’s Office is an expert in child advocacy and conducting investigations, and to lose this specialized expertise for the children and youth of Ontario is a travesty,” the CCCYA said in this press release, asking the government to reconsider its decision.

There is a perception of callousness from the Ford government on axing the Child Advocate role, as federal NDP MP Charlie Angus pointed out in this tweet: 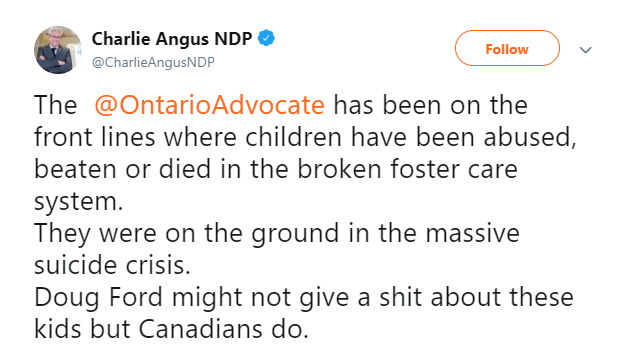 However, there are those who are in favour of eliminating the Child Advocate position, such as former Ontario Ombudsman Andre Marin, who pens his own column (such as this one) suggesting that the position was unnecessary since they were previously assumed by the Ombudsman already.

It was also costing the government at approximately $300,000 per year for the additional role, according to Marin, so axing it made fiscal sense.

According to their website, the Ontario Ombudsman “promotes fairness, accountability and transparency in the public sector by investigating public complaints and systemic issues within his jurisdiction.”

Would the Ombudsman be able to once again provide that same level of scrutiny and oversight on behalf of children?