COVID-19 exposed Brampton’s economic crisis. But what can we do about it?

Some big changes coming to garbage and recycling in Brampton

With September in full swing, the municipal election campaign has kicked into high gear after Labour Day as candidates for mayor, city, regional councillors and school board trustees fan out across Canada’s ninth largest city asking residents for their votes come October 22.

From debates, campaign kickoffs, and even a few policy announcements, here are a few observations as of now from the municipal election campaign trail.

Although Rogers TV may have left town, thankfully there are two public debates organized for people to see their Brampton mayoral candidates and figure out who is best to run this city in the coming four years.

The first one being held will take place September 20 at 7 pm at Sheridan College-Davis Campus, organized and moderated by former Toronto Star reporter San Grewal. All 7 mayoral candidates confirmed they will be attending, and it will be free and opened to all of the public.

The other debate is happening on September 25th, also at 7 pm, but this time at the Rose Theatre in downtown Brampton. Tickets are free, but you have to register online (see the link) and will not be available at the door. 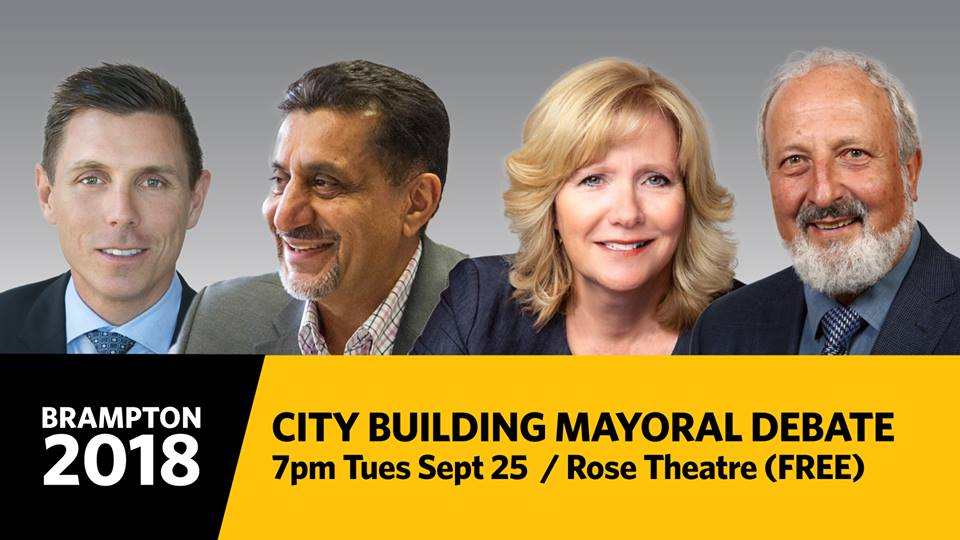 However, the Rose Theatre debate is limited to only 4 out of the 7 candidates: incumbent mayor Linda Jeffrey, Patrick Brown, Bal Gosal, and John Sprovieri. Wesley Jackson, Mansoor Ameersulthan and Vinod Kumar Mahesan were not included.

Jackson had been quite vocal on Twitter about his exclusion from this debate; perhaps he could try what Ontario Green Party leader Mike Schreiner did: live tweet videos of his responses to questions as the debate is happening?

Speaking of Jackson, he is a man with very specific and concrete ideas developed from his years as a local Brampton blogger. He recently tweeted out this graphic, suggesting that a subway in Peel Region could be feasible…but going north and south.

A Peel Subway? Why Not? We could connect Long Branch Station on the All Day Two Way GO Line to the Bramalea City Centre. At approximately 21 km of track, Brampton, Mississauga and Peel Region have more than sufficient debt capacity to fund their share (future lines in Red). pic.twitter.com/iUP78AIDmR

The idea is to connect Long Branch GO station in south Etobicoke to the Bramalea City Centre, with extensions to Pearson Airport and Square One. With approximately 21 km of track, Jackson believes Brampton, Mississauga and Peel Region have more than sufficient debt capacity to fund their share of the project.

It is interesting because for years those advocating for a subway in Mississauga wanted it to run east to west, to allow easier commutes to downtown Toronto. For those of you who are skeptical about the viability of this plan, Jackson points out that current trends show traffic increasingly staying within Peel, and Dixie Road is increasingly gridlocked. Bramalea residents aren’t getting from the LRT fast reliable service, and BCC has Brampton’s highest population and job density.

He continues, saying there are only a few primary north-south corridors that completely run from Lakeshore to Mayfield Road: Dixie, Cawthra / Highway 410, Hurontario, Mississauga Road / Erin Mills Parkway and Winston Churchill. Dixie connects to BCC and Longbranch, and is very well developed, but suffers from all the gridlock that calls for higher order transit. The road can be a significant job generating commercial corridor if the region acted like..well, a region.

Speaking of policy ideas, Patrick Brown has started to flesh out specific platform planks, releasing a public safety plan this past week in response to the rising crime in Brampton.

“I am announcing the formation of Patrick Brown’s Public Safety Initiative. Its mandate: consult with as many residents and community leaders as possible, and report back to me by October 23rd with their recommendations on how to make our City safe once again,” Brown said in his statement, adding that outgoing councillor Gael Miles will chair his initiative and will be drawing advice from Chaplain Gerry Thompson and Peel Police Association President Adrian Woolley.

Brown is also asking the initiative to focus on policy priorities Brown previously outlined in his campaign, such as hiring more front line officers, strengthened the COAST (Crisis Outreach and Support Team) programs, and affordable recreation for youth.

The former PC leader also took a jab at Mayor Linda Jeffrey. “Peel Police report that to date in 2018, shootings are 11 per cent higher than last year’s record pace. But when our city looked for support and guidance from City Hall, and a renewed focus on public safety, there was no leadership from Mayor Jeffrey. None!”

If that Brown promise doesn’t impress you, perhaps his proposal to build a multi-purpose sports stadium will, to allow sports such as lacrosse, kabaddi, cricket, soccer and field hockey.

With Labour Day as the “unofficial real start” of the campaign period, a number of candidates are having traditional “official launch / kickoffs” for their campaigns. Lawyer Gurpreet Bains, running for regional councillor in Wards 2 and 6 and looking to unseat incumbent Michael Palleschi, had her campaign kickoff on September 8 from 1 to 4 pm at a strip plaza on 15 Fandor Way, just north of the intersection of Chinguacousy and Bovaird.

Cody Vatcher, who is running for regional councillor in Wards 7 and 8, had his campaign launch on September 9 from 11 am to 1 pm at the Lion’s Banquet Hall. And Harpreet Hansra, a communications professional for William Osler Health Centre running for city councillor in Wards 3 and 4, has his campaign rally next week on September 16 from 2 to 4 pm at the southeast corner of Hurontario and Steeles.

With the advent of social media as a communications tool and medium for news consumption, it’s no surprise that candidates are producing high quality videos to introduce themselves to voters, such as Mario Russo running for regional councillor in Wards 1 and 5.

Also in Wards 1 and 5, candidates Paul Vicente and Rowena Santos, otherwise known as the “Stand Up for Brampton” slate.

Wards 2 and 6 city councillor candidate Jermaine Chambers, who previously ran for a PC party nomination in Brampton West, got a timely endorsement for his candidacy…from the Tory MPP for Brampton West, Amarjot Sandhu, who won that aforementioned nomination Chambers contested. 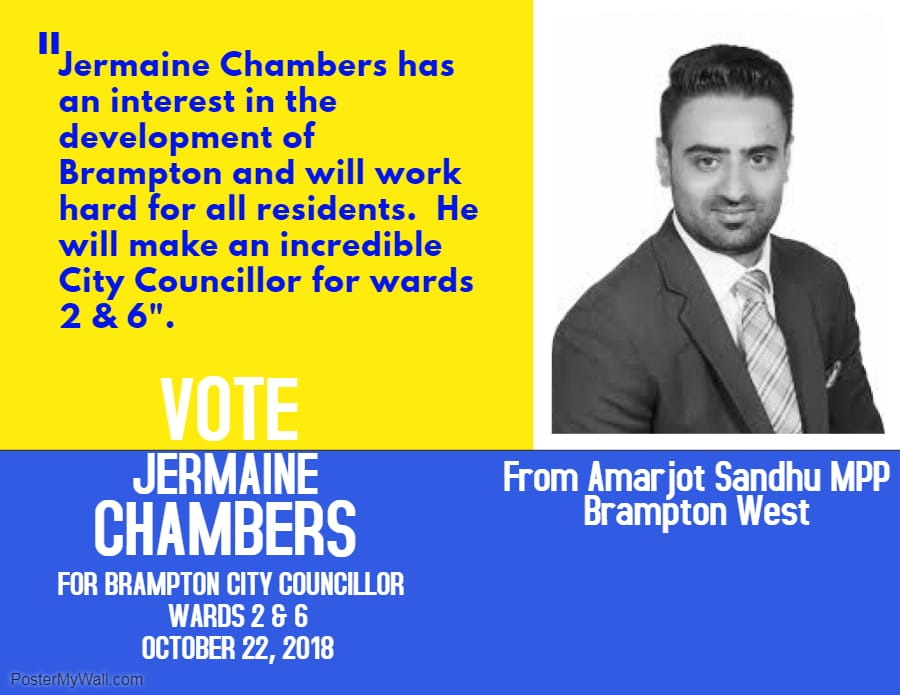 Chambers faces an uphill battle to unseat incumbent Doug Whillans, but this endorsement doesn’t hurt, especially after the Conservative blue wave that swept Ontario, even though the NDP technically won more seats in Brampton.

Although it is not that visible on the surface, there is a bit of unofficial party politics saturating into the Brampton municipal elections. There are candidates running more on a progressive slant, such as Santos, Vicente, Wards 7 and 8 candidates Martin Singh and incumbent Pat Fortini, as well as Wards 9 and 10 incumbent Gurpreet Dhillon (running for regional council).

Likewise, candidates such as Whillans, Palleschi, Russo and Vatcher lean more towards to conservative side of the political spectrum (Vatcher himself is a young PC activist). I think other candidates such as Jackson and Brown are looking to straddle the fence in order to draw support from both sides.

It looks like slim pickings for incumbent mayor Jeffrey, as her former party the Liberals don’t really have a political foothold outside of Toronto anymore. But she is still the sitting mayor, and incumbency usually grants incredible advantage if you’re running for a second term.

As this election continues, inbrampton.com will look to provide more develompents from the campaign trail.