Since the last story inbrampton.com published about the election, there have been more developments occurring on the campaign trail.

We are approaching the end of September, and with one month to go before the October 22 municipal election. So here’s the latest on what is happening right now with the election.

Although labour unions and corporations are banned from donating to candidates, that doesn’t mean they can’t offer some official endorsement. The Labourer’s International Union of North America (LiUNA) Local 183 announced they were endorsing a number of Brampton council candidates, particularly those of a more “progressive” persuasion:

In response, some retiring veteran members of council, such as Regional Coun. Elaine Moore, offered her endorsement to candidate Mario Russo, who is looking to take her place.

There are some people who do see ‘factions’ forming in Brampton municipal politics, as this Reddit thread recently discussed who is the preferred council candidate for either incumbent mayor Linda Jeffrey or former PC leader Patrick Brown.

One of the candidates running to unseat incumbent city councillor Doug Whillans in Wards 2 and 6, banker Jermaine Chambers, unleashed a stinging attack comparing himself with the incumbent.

Good morning #Wards2and6 . The choice between Doug and Jermaine in this election is clear. Doug has failed to move this city forward over the last your years while giving himself a pay raise. Let's vote for better @BramptonFirst #Brampton #brampoli pic.twitter.com/lFYDrGzHyA

In the literature, Chambers says he will vote for a freeze on taxes, will support the LRT, keep Brampton safe, and will not vote to increase his own salary, while Whillans is a failed councillor who voted to give $1.5 million to a private sports team, voted against the LRT, voted for a salary increase as crime rose under Whillans’ watch and raised property taxes to 16.5 per cent.

Chambers also said he had no hesitation praying prior to council meetings as opposed to Whillans who voted against having a Christian prayer in council chambers.

Brampton City Council voted in 2015 to replace the Lord’s Prayer with a non-denominational one: “Inspire us to decisions which establish and maintain a city of prosperity and righteousness where freedom prevails and where justice rules. Amen.”

In addition to the debate held at Sheridan College Davis Campus on September 20 and one scheduled at the Rose Theatre on September 25, Brampton mayoral candidates also had a debate organized by the Brampton Board of Trade which was streamed live on Facebook.

BBOT has also started hosting individual debates for councillor candidates also on their Facebook page, so I would encourage you to watch those to find out more about your local candidates running in your area. 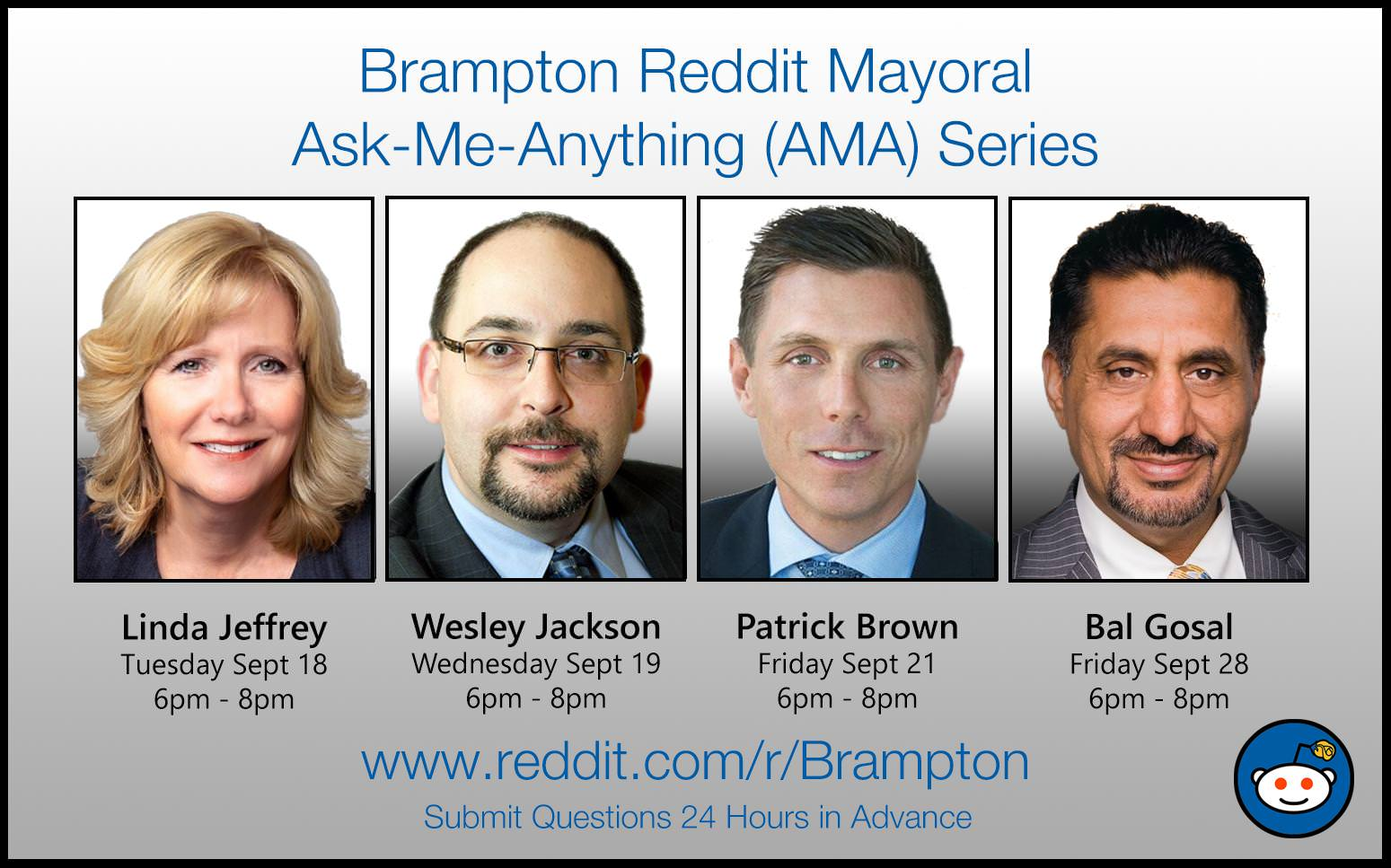 Mayoral candidates have also taken to Reddit to answer people’s questions, which has become a frequently used platform for various Canadian politicians. Reddit is hosting a Q and As with the aforementioned mayoral candidates.

Mayor Jeffrey’s Reddit session was conducted on September 18, where she answered questions about transit / traffic, development, public safety, property taxes, and arts and culture in Brampton.

Another “Foot in Mouth” Moment for John Sprovieri?

Speaking of mayoral candidates, Regional Coun. John Sprovieri made headlines last year for writing what some considered a “racially insensitive” email reply to a constituent, for which Sprovieri later apologized.

But it seems Sprovieri may have landed himself into a new racially tinged controversy, as seen in this segment from the September 13 Peel regional council meeting.

"What I do expect right now, respectfully, is not a question like that." –Ramsay to Sprovieri, #Peel Council. pic.twitter.com/hamPVG8k8H

In this response on the matter concerning fellow councillor Carolyn Parrish over her own racially tinged remarks, for which she was later reprimanded for, Sprovieri asked Sophia Brown Ramsay of the Black Community Action Network if they were expected to “bring Parrish to the middle of the floor and each give her a whipping”.

You can see the rest of the video yourselves the visibly uncomfortable reactions from fellow councillors and Robert Serpe, the Executive Director of the Peel Police Services Board. If you’re as tone deaf as Sprovieri was at that moment as to what the big deal is, go look up the history of slavery, about how slaves were whipped among other things done to them, and educate yourself.

The Past Coming to Haunt Patrick Brown…Again?

No, this has nothing to do with Brown’s troubles regarding allegations of sexual misconduct, but they may be more important since he’s now running for Brampton mayor. Brown is a former municipal councillor and MP from Barrie, and one Twitter user found an old newspaper clipping of him allegedly spreading falsehoods about certain colleagues at the time. 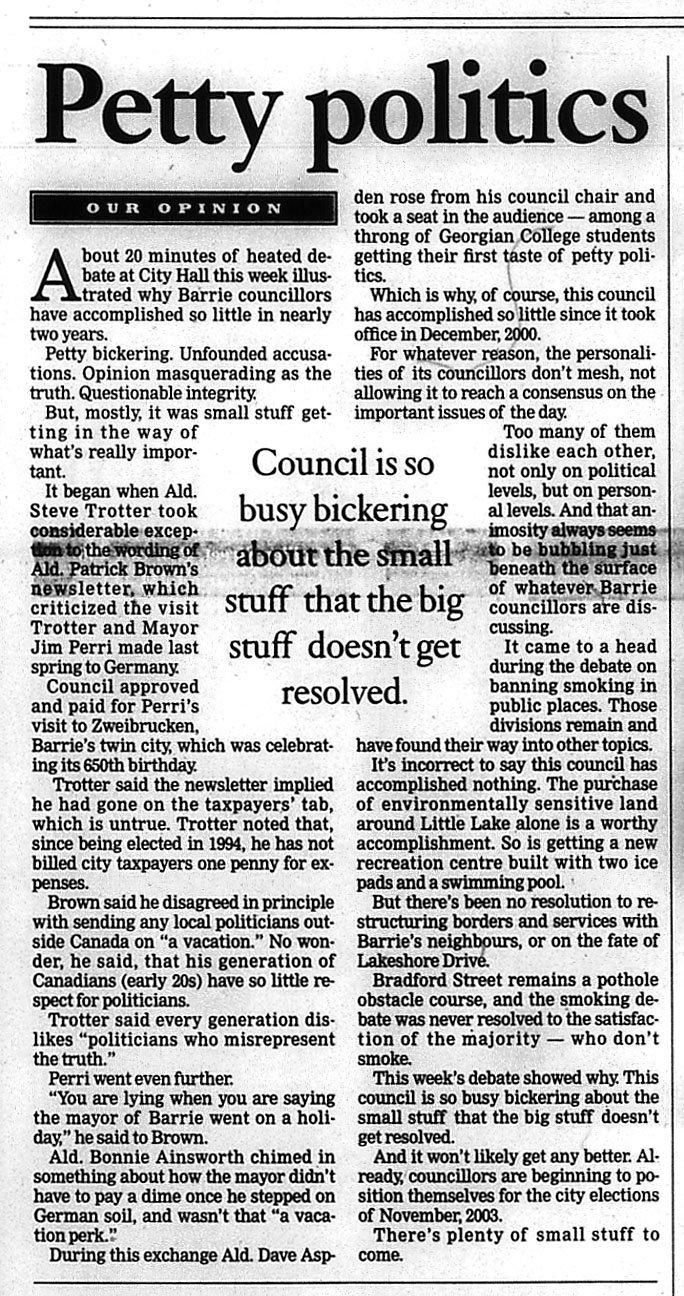 This story was from 2002, when Brown was a 24 year old city councillor. The allegation Brown made at the time was that his colleagues went on some “junket” in Germany at taxpayers expense, which was challenged to not be true.

So for those in Brampton who believe Brown’s municipal experience may be an asset when it comes to being mayor, they should look deeper into his past up in Barrie to ensure the right decision is being made.