A Brampton candidate has found one of his signs defaced in the worst possible way, which is just another indication of darker and more negative rhetoric percolating during this election.

A Brampton candidate has found one of his signs defaced in the worst possible way, which is just another indication of darker and more negative rhetoric percolating during this election.

Lawyer and Twitter user Darcel Bullen posted this video of a sign for Brampton East NDP candidate Saranjit Singh, one with the candidate’s picture on it, sprayed over with black paint…as well as the N word.

Video showing n-word defacement of @SaranjitSingh_ sign in #Brampton. Horrifying and too common anti-black racism #elxn43. I was called the n-word lots growing up in the #GTA. The first racialized federal party leader @theJagmeetSingh is historic for Canada: We are loved! pic.twitter.com/8VWc3gOuLT

This riding was also the former stomping grounds of the federal NDP leader, Jagmeet Singh, who once represented the area as a provincial MPP. Jagmeet has been subject to racism himself, most recently in Montreal when a man suggested he remove his turban to “look more Canadian“.

“As a labour, human rights lawyer and community organizer, I have been a voice for people who need it the most. When I heard about the signs, I thought of the people who have heard hateful language used against them in our community and how they would be impacted by seeing this. I draw a lot of inspiration from Jagmeet and the way he has handled these situations,” Saranjit said in a statement, adding that he’s focused on making life better for Brampton and expanding health care services and bringing in a new university.

“This language is very hurtful and it’s unfair that people in our community have to see these kinds of comments on their way to work or school. We’re focused on making life better for Bramptonians and on running a positive, inclusive campaign. I want people to remember: we are all more alike than we often realize. While we may live in different homes, practice different religions, or speak different languages, there is more that unites us than separates us,” Kaur said.

Beyond even Ontario’s borders, an NDP candidate in Calgary who is also of Sikh background also had his sign defaced, telling him to ‘go home’. 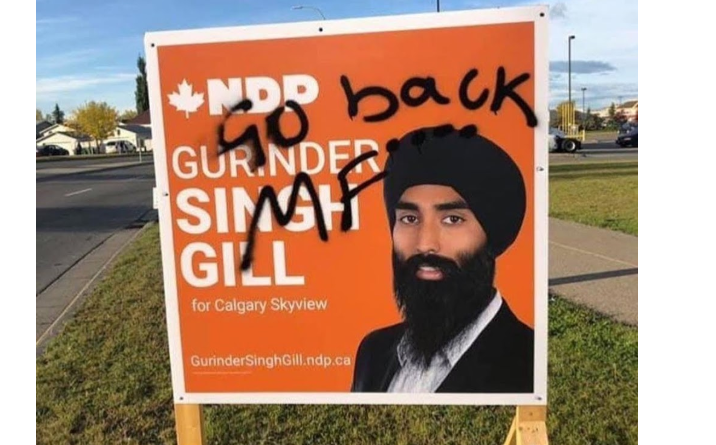 Taking aside the fact that the vandal for Saranjit’s sign was rather uneducated in their racism, as the N-word is usually used to denigrate members of the black community, that kind of racist language has no place in a democratic exercise like an election campaign.

Jagmeet has often faced strange accusations that he’s going to bring in Sharia law, even though he’s not a Muslim. But he himself said that does not make that form of racism acceptable even if the accuser gets their facts wrong.

Unfortunately, racist and hateful rhetoric has been proliferating online and now out in the open for the past several years, weaning its way into our democracy.