The federal election campaign is now underway as representatives from all parties fan out across their communities in search of your vote to form Canada’s next government.

In Brampton’s five ridings, which all went entirely Liberal in the last election in 2015, things may be looking a bit more competitive this time around as the Trudeau government will now have to play defense against all other challengers. 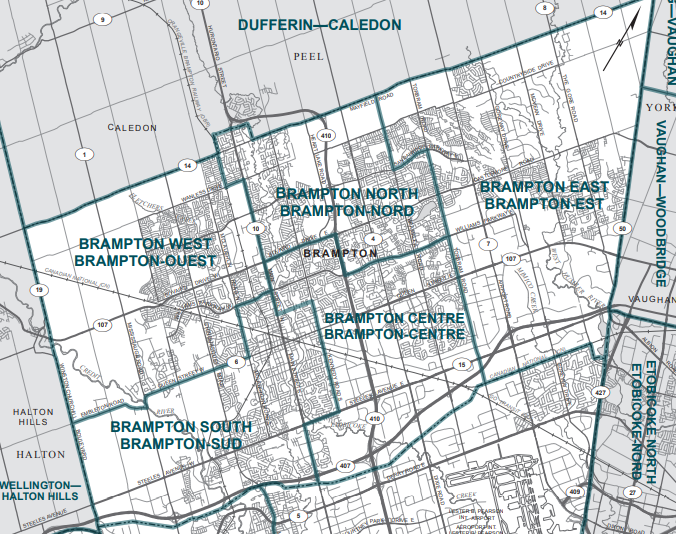 With the Conservatives steadily climbing in the polls and Jagmeet Singh, an NDP leader who can tout local roots, there’s no guarantee that it’s going to be a cake walk again this time for Team Trudeau.

Here are the candidates (confirmed as of October 2) running in Brampton’s five federal ridings.

This time, Gosal’s wife Pawanjit, the President and Principal Broker of JSP Insurance & Financial Services Inc in Brampton, is running for the Conservatives. The NDP have nominated former Singh staffer Jordan Boswell, the Greens are running past candidate Pauline Thornham, the People’s Party’s candidate is a self admitted Liberal, Baljit Bawa and David Gershuny is running for the Marxist Leninist Party.

Liberal MP Raj Grewal, who was first elected in 2015, is not running again, leaving under a cloud of controversy stemming from an admitted gambling addiction which resulted in numerous financial problems. They young MP eventually served out the remainder of his time in Ottawa as an Independent.

In Grewal’s place, Liberals have nominated international trade consultant Maninder Sidhu. The Conservatives are running small business owner Ramona Singh, the NDP have nominated Saranjit Singh as their candidate, Teresa Burgess-Ogilvie is the Green Party candidate, Gaurav Walia is the PPC candidate, Partap Dua is the candidate for Canada’s Fourth Front and Manpreet Othi is running as an Independent.

First term Liberal MP Ruby Sahota is running for a second term after defeating then Conservative MP Parm Gill in 2015, who was seeking a second term in the new riding. This time, the Tories are putting forward public strategy and communications consultant Arpan Khanna, who is in the process of getting his lawyer licensing requirements.

The NDP are fielding community organizer Melissa Edwards as their candidate, the Greens are running Norbert D’Costa and Keith Frazer is running for the PPC.

First term Liberal MP Sonia Sidhu is seeking a second term in office. The Conservatives are fielding Ramandeep Brar, the owner of a transportation and logistics firm operating in Brampton for over 15 years.

First term Liberal MP Kamal Khera, a registered nurse, is running for reelection. Other candidates include lawyer Murarilal Thapliyal for the Conservatives, health care professional Navjit Kaur for the NDP, Jane Davidson for the Greens, Roger Sampson for the PPC, Paul Tannahill for the Christian Heritage Party, Harinderpal Hundal for the Communist Party and Anjum Malik for the Canada’s Fourth Front Party.

There is also an interesting side story pertaining to former Brampton MP Kyle Seeback, who served between 2011-2015. Seeback recently secured the Tory nomination in Dufferin-Caledon after the sitting MP, David Tilson, decided to retire.

Originally, Seeback was not even contesting the Tory nod in Caledon, but the original candidate was removed by the party after a controversial nomination meeting in which allegations of improper membership purchases arose. The Conservatives had a new nomination meeting and Seekback was selected.

Dufferin-Caledon has been blue since 2004, so the race is really for the Conservatives to lose. Other candidates running include Liberal Michele Fisher, the NDP’s Allison Brown, the Green’s Stefan Wiesen, Chad Ransom from the People’s Party and Russ Emo for the Christian Heritage Party.

During his inauguration speech, Brampton Mayor Patrick Brown said his city will no longer be the stop where campaigning politicians swing by with empty promises just so they could garner votes at election time.

“We are the core of the 905 where those swing seats other politicians covet during election time are located, but we have been massively underfunded. The days of not accepting our fair share with a smile are over. I don’t care if it is Ford or Trudeau, my party is the people of Brampton and I’ll work with anyone who delivers for Brampton,” Brown said.

The city has definitely been more vocal about getting its ‘fair share’ of funding for services, such as launching the ‘Fair Deal for Brampton’ campaign to highlight the disparity in health care funding in Brampton and demanding for a third hospital.

With all three parties needing the 905 region to form government, could we hear promises and commitments from all the parties that sound a bit different than in previous elections and stand a higher chance of being kept this time around?