Can Residents Do More to Deter Crime in Brampton?

It’s no secret that crime is a persistent issue in Brampton, but lately a string of violent incidents have gotten political and community leaders talking and looking for solutions.

A series of brawls around the community prompted action from the city’s federal MPs and late last month a town hall was held at the Jim Archdekin Community Centre specifically to address residents’ growing concern around youth violence in Brampton, hosted by the Ontario Gurdwara Committee and United Sikhs.

You can watch some of the segments from that meeting here. But is there more that can be done to help mitigate and address violent crime in Brampton?

Wards 9 and 10 City Councillor Gurpreet Dhillon hopes so, as he hosted a community meeting on July 12, 2018 at the Gore Meadows Community Centre along with representatives from Peel Regional Police and Neighbourhood Watch Brampton to discuss the recent violent activity and to receive residents’ thoughts on the subject. 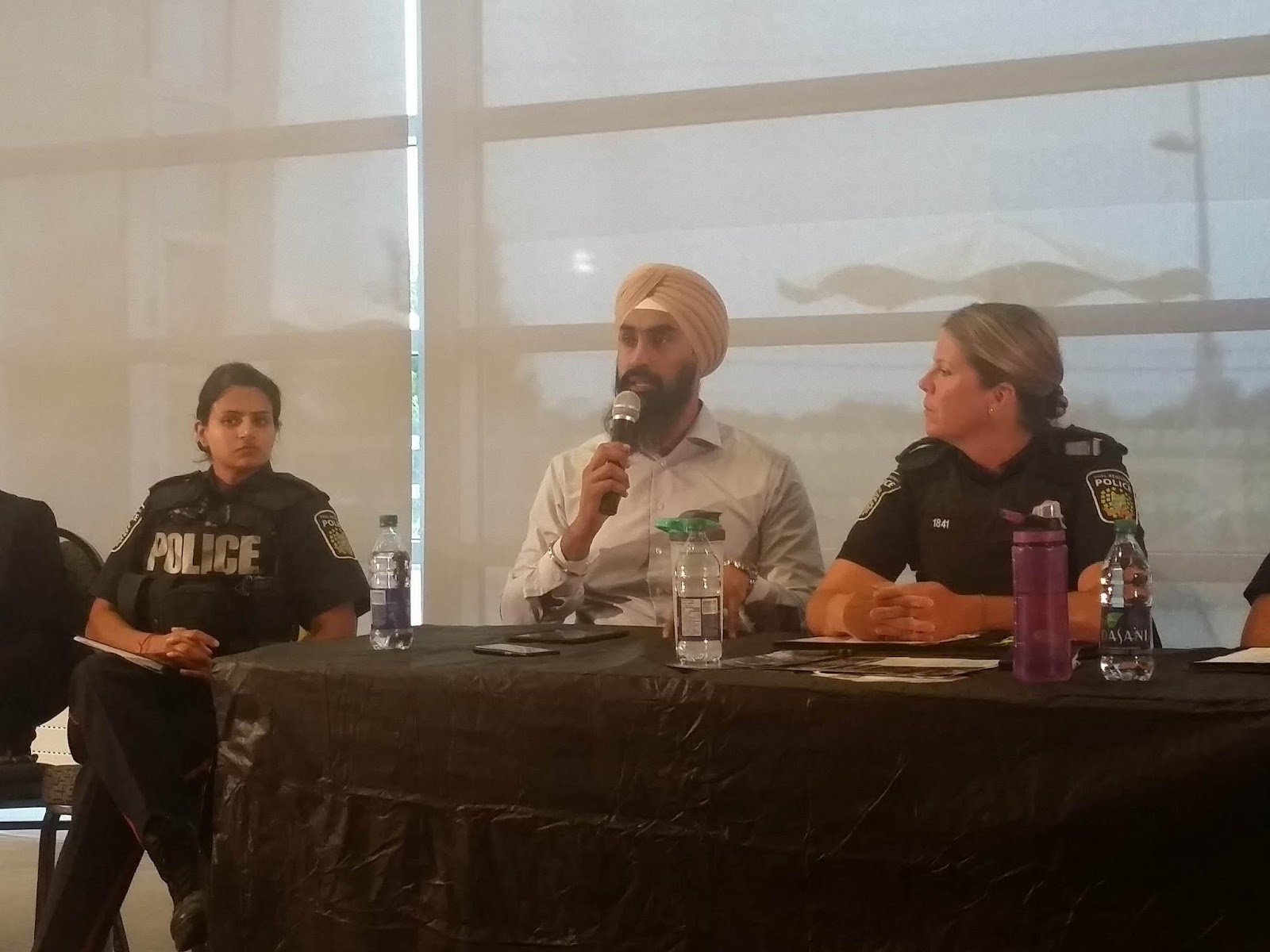 “All the parts of a body have to move together in order to work, and that’s the same with the city of Brampton when it comes to working alongside the police, Neighbourhood Watch, and other groups and stakeholders,” said Dhillon, referring to a recent nuisance by-law Brampton councillor approved as an example of what the city can do on their end with regards to addressing crime.

The new by-law addresses offensive and vulgar behaviour and actions by residents and their guests, the use of profanity, and any other potentially disruptive behaviour, with the aim at cracking down on parties that get out of control and other public nuisances. The minimum fine for an offence is $500 and the maximum fine for an offence is $100,000. 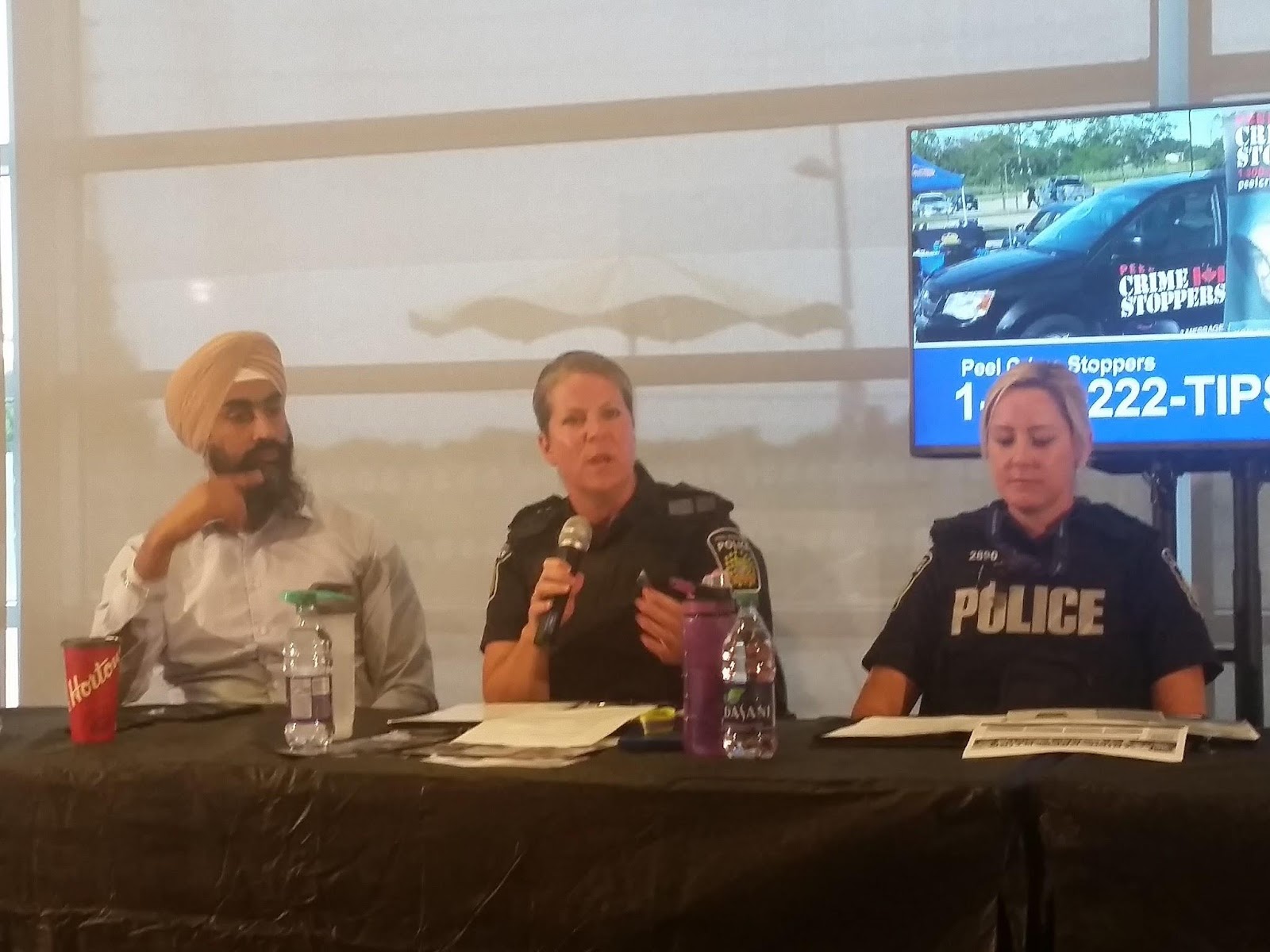 Constable Heather Cannon, who has been a police officer for 23 years, outlined her current role in the Crime Prevention Unit and the programs they’ve been working on. One such example is the online buy and sell safe zones, which allow purchases to be made at the police station without fear of either the buyer or the seller getting robbed or assaulted.

Some people feel nervous about making such buy and sell transactions, even in public venues like a coffee shop or the mall, and Cannon said they’ve seen incidents were someone was assaulted or robbed in such a public place when such a transaction happened.

But the officer cited did notice that when the safe zone was selected as a meeting spot, either the buyer or seller did not show up for the transaction, thus preventing something from happening, so there was evidence their programs yielded the desired results. Another officer mentioned the Crime Prevention Academy starting in September.

One gentleman asked about Bill C-71, the legislation introduced by federal Public Safety Minister Ralph Goodale to tighten Canada’s firearms laws with changes to the background check system and new mandatory record keeping practices for vendors.  Unfortunately, that is a federal issue which is outside of the jurisdiction of municipal governments.

Neighbourhood Watch Brampton was part of the panel as well, and their spokesperson Nikki Cedrone was very adamant in pushing her organization as a force in the city to mitigate criminal or violent activity. But she ran into some resistance from a Peel Village resident, who is so concerned over the rash of crime that she said she would not let her children go outside anymore.

Other tips included making sure that residents call the police if they see anything suspicious, even if the resident themselves do not see the importance. “A call is never a wasted call,” Officer Cannon said, noting that what may not be important to one person could have significant impact on their neighbour. Cannon stressed that she, as an officer, cannot go and arrest someone unless someone makes a complaint or calls with information.

Dhillon mentioned that with municipal elections coming in October, he will be calling for the need for increased funding, with more emphasis of ‘eyes to the streets’ in partnerships with organizations such as Neighbourhood Watch. He also referred to a recent meeting he had with police association members and federal Conservative leader Andrew Scheer to discuss the recent problems in Brampton.

Overall, the session’s intent was to provide information for residents who came out to get an idea of what they could do on their part to stop criminal activity from happening or continuously reoccuring. One thing’s for sure, the police cannot take action unless residents also do the same.