In this previous article about Brampton transit and how much funding would be required to accommodate the growing ridership, it was pointed out that funding lags behind other transit systems in the GTA on a per capita basis.

You can argue whether that is fair or not, but despite this statistic Brampton’s transit system is still being recognized for high quality service.

The city announced this week that Brampton Transit has won an award for Service Excellence at the Canadian Urban Transit Association’s annual conference in Toronto.

CUTA is a member-based association that supports public transit as the core of integrated mobility across Canada. They provide members with the resources, networking, training, events, data, research and advocacy needed to support success in the industry. The organization’s vision is to inspire and influence the evolution of integrated urban mobility.

Here’s what CUTA had to say about Brampton Zum when giving them the Service Excellence award. 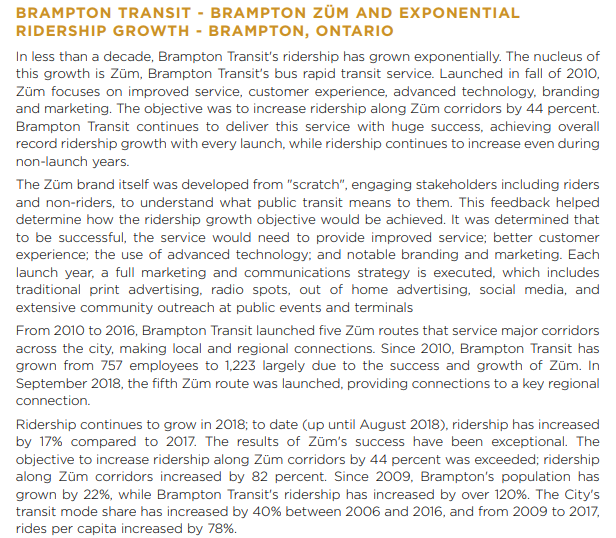 “The award in Service Excellence from CUTA is an honour for our city and transit system. We’re working hard to continue to deliver the kind of service residents expect from a major, urban, forward-thinking city. We remain committed to our riders, to an innovative and smart transit system and to service excellence,” said Alex Milojevic, the general manager of Brampton Transit.

For more on CUTA’s decision regarding Brampton Zum, click here.

Photo courtesy of the City of Brampton