Brampton is Renaming Some of its Neighbourhoods

As a city spokesperson told inbrampton.com some time ago, Brampton technically doesn’t have neighbourhoods, but what are termed as ‘Secondary Plans’, and a comprehensive review of those plans would be forthcoming.

There are currently 54 official recognized secondary plans for the City of Brampton. Since some of them date back to the 1970s, at a time when most of Brampton was, believe it or not, still rural farmland, it’s no wonder the city is looking for some updates to their communities.

The staff report outlining the revised Secondary Plans (SPs) Review was received by City Council on March 5, which involves the reasons behind the revision:

The city is now in the final stages of the review, which involves a number of steps, such as:

What this review is not intended to do is to change land use designations, or identifying new areas for intensification, changing existing density targets, or altering existing development rights.

Below is a map of Brampton’s current Secondary Plans (you can see the full map here): 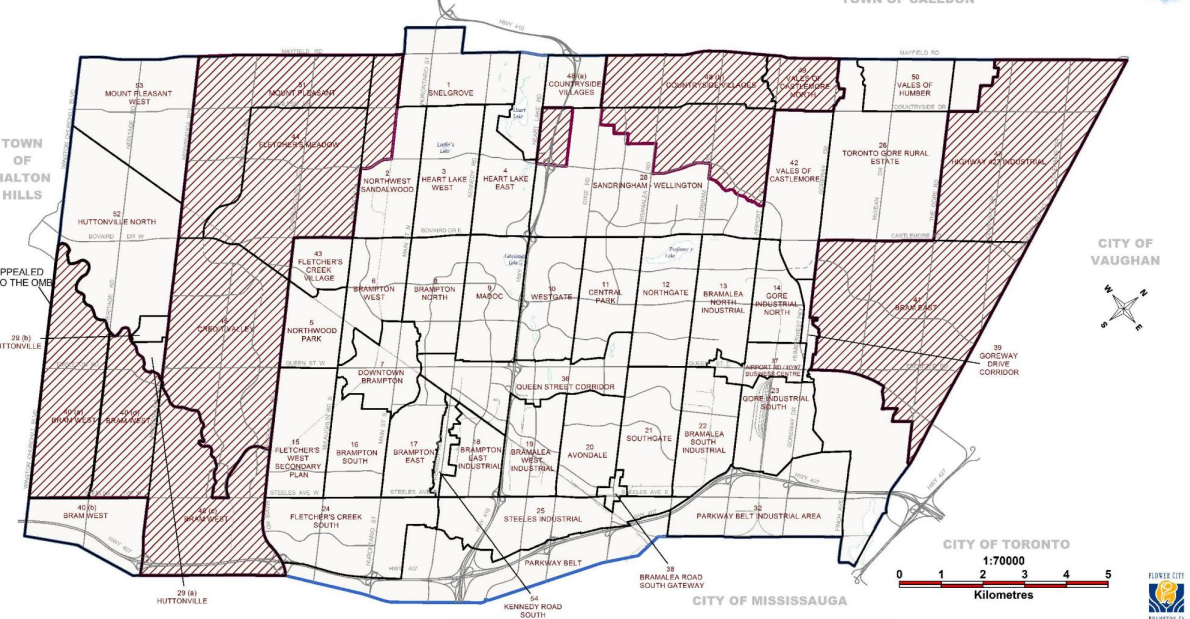 And the new proposed SPs are on the map below: 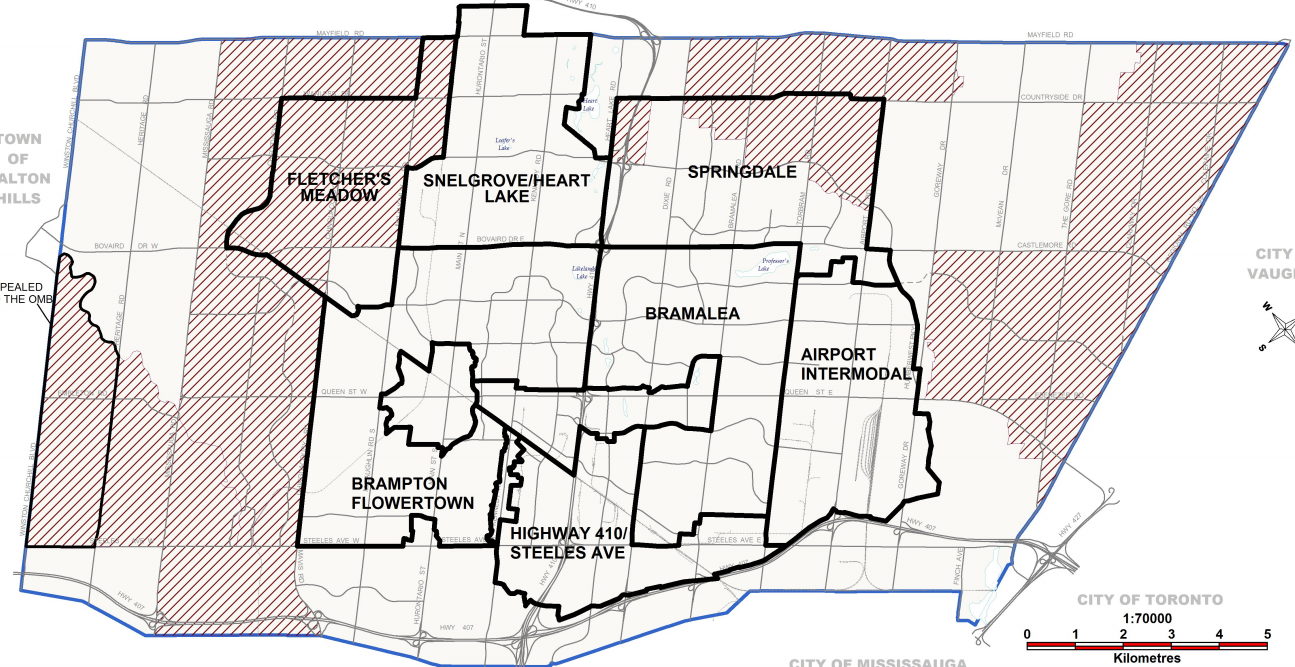 You may notice that there are two Secondary Plans that are left blank with no descriptions in the revised map. Those are the currently existing Downtown Brampton and Queen Street Corridor Secondary Plans, which are not slated for any changes.

As for the parts of Brampton surrounding the cluster of Secondary Plans, city staff explained that the reason that there are no proposed SPs in those areas because those areas still have land slated for development. The current proposal for revising SPs is for built up areas only.

The proposed Secondary Plans have their distinctive boundary descriptions based on the consolidation of existing plans.

The proposed Fletcher’s Meadow Secondary Plan is bound by Wanless Drive and Mayfield Road to the north, the Canadian National (CN) Railway to the south, McLaughlin Road and Orangeville Brampton (OBRY) Railway to the east, and Creditview Road to the west.

The area that is to comprise of the Snelgrove-Heart Lake Secondary Plan is bounded by Mayfield Road to the north, Bovaird Drive East to the south, Heart Lake Road to the east, and McLaughlin Road and the Orangeville Brampton (OBRY) Railway to the west.

The area to comprise the proposed Springdale Secondary Plan is bounded by Countryside Drive to the north, Bovaird Drive and Cottrelle Boulevard to the south, Heart Lake to the east, and Airport Road to the west.

The land area subject to the Brampton Flowertown Secondary Plan are generally Bovaird Drive West to the north, Highway 410 and Kennedy Road South to the east, Steeles Avenue West to the south and Chinguacousy Road to the west.

The designated area for the Bramalea Secondary Plan is bounded by Bovaird Drive East to the north, Torbram Road to the east, the Don Doan Recreational Trail and open space south of Dearbourne Boulevard to the south and Highway 410 and Dixie Road to the west.

The lands for this proposed SP is bounded by Torbram Rd. to the west, North Park Dr./Cottrelle Blvd. to the north, Goreway Dr. to the east, and Hwy 407 to the south

The lands for this proposed SP is bound by Kennedy Road South to the west, the Canadian National Railway, Clark Boulevard, and extending along the Don Doan Recreational Trail and the open space south of Dearbourne Boulevard to the north, Dixie Road and Torbram to the east, and Highway 407 to the south.

The report was received by Brampton City Council on the March 5 Planning and Development Committee meeting.

Perhaps with this proposal to revise some of the names of Brampton Secondary Plans, they could also look at introducing names for city council wards as well? At least it’s a good thing they renamed the ‘Sandringham-Wellington’ area as Springdale; I don’t really know anyone in Brampton who has ever called that neighbourhood by the former.

What do you think of the proposed Secondary Plans for Brampton? Do you have some better name ideas? Or do you even agree with the concept of Secondary Plans at all and prefer that Brampton have ‘actual’ neighbourhoods?